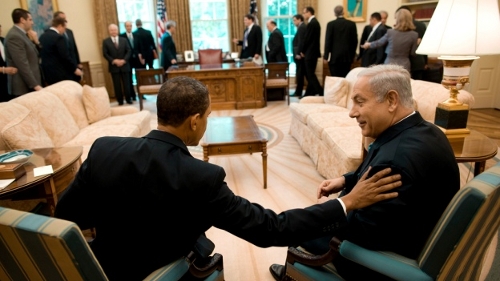 U.S. President Barack Obama and Israeli Prime Minister Benjamin Netanyahu reaffirmed the “special relationship” between their two countries on Monday after their meeting at the White House, which focused mostly on the Israeli-Palestinian conflict and on Iran.

In opening his remarks to the press following their meeting, Obama reiterated “the special relationship between the United States and Israel”. Netanyahu said he was “particularly pleased” at Obama’s “reaffirmation of the special relationship” and said both nations share a “common threat” of “terrorist regimes and organizations that seek to undermine peace”.

The “special relationship” is a term used to describe the U.S. strategic relationship with Israel, in which the U.S. lavishes financial and military aid upon the Middle Eastern state.

The U.S. gives Israel upwards of $3 billion annually and provides it with military hardware such as F-16 fighter-bombers and Apache helicopter gunships, which were used in Israel’s assault on the Gaza Strip in December and January. That assault, dubbed “Operation Cast Lead”, resulted in the deaths of more than 1,300 Palestinians, nearly one-third of whom were children.

Both nations came under fire from human rights groups when Israel used U.S.-supplied cluster munitions against southern Lebanon in 2006. A percentage of cluster sub munitions fail to detonate initially, and become de facto landmines that threaten the civilian population long after the fighting has ended.

Obama said that “It is in U.S. national security interests to assure that Israel’s security as an independent Jewish state is maintained.” His reference to Israel as a “Jewish state” is significant because Netanyahu has demanded that the Palestinians recognize Israel as such before any progress can be made towards peace.

Israel has occupied the territory of the West Bank since the war of June 1967. Israel also occupied the Gaza Strip, Syria’s Golan Heights, and parts of southern Lebanon during that war. Israel withdrew from the Gaza Strip in 2005, but has kept that territory under siege, blocking commercial goods and humanitarian supplies from entering.

In his remarks to the press, Netanyahu said that “Palestinians will have to recognize Israel as a Jewish state” for peace negotiations to move forward.

The Palestinian view is that Israel is an illegitimate state, created in 1948 by ethnically cleansing Palestine of its Arab inhabitants and by a unilateral declaration of independence by Zionist leaders, who refused to define the new state of Israel’s borders.

The question of Israel’s border remains at issue today. There is an international consensus that the path towards peace should consist of a two-state solution, with a Palestinian state neighboring Israel along the pre-1967 armistice line, also known as the “green line”, which Israel rejects.

By contrast, the Hamas leadership in Palestine has repeatedly reiterated its acceptance of this two-state solution. Hamas supreme leader Khaled Meshal said again earlier this month that the organization “has accepted a Palestinian state on the 1967 borders”, adding that “We do not have any feelings of animosity towards Jews.”

Hamas has offered a long-tem truce with Israel based on Israeli withdrawal from the occupied territories and recognition of the right, guaranteed under international law, of the return of refugees to their homeland.

The Israeli leadership has typically demanded that Palestinians recognize Israel’s “right to exist”, which Palestinians view as an attempt to legitimize Israel’s ethnic cleansing and annexation of Arab land.

Netanyahu has taken that demand one step further, saying not only that Palestinians must recognize Israel’s “right to exist”, but that they must recognize it as “a Jewish state”, a condition even more anathema to Palestinians, particularly since one-fifth of Israel’s population are Arabs.

The political party of Netanyahu’s Foreign Minister, Avigdor Lieberman, recently proposed legislation that would make it illegal, punishable by up to three years in jail, for Arabs to mourn their dispossession at the hands of Zionist Jews, culminating in the state of Israel in 1948.

Jews celebrate the anniversary of May 14, 1948 on the Hebrew calendar as their independence day, marking the day when Zionist leaders unilaterally announced the existence of the state of Israel. But for Palestinians, this day marks the “Nakba”, or “Catastrophe”, and is recognized as a day of mourning.

In his remarks, Obama paid lip service to the international consensus on a two-state solution, saying that “Settlements have to be stopped in order for us to move forward” and that “the humanitarian situation in Gaza has to be addressed”, but declined to explain what steps his administration would take to pressure Israel to address either concern.

Israel’s settlements in the territories it has occupied since 1967 are illegal under international law. The U.S. has typically regarded them as an “obstacle to peace”, but, in accordance with the “special relationship”, administration officials refuse to publicly acknowledge them as “illegal”.

U.S. financial, military, and diplomatic assistance to Israel has continued despite Israel’s insistence on expanding illegal settlements in the West Bank and illegally constructing a wall within the occupied territory that effectively annexes large swaths of Palestinian land.

The U.S. has long protected Israel in the United Nations Security Council, including by exercising its veto power to block resolutions critical of Israel. During the 2006 Lebanon war, the U.S. blocked a cease-fire resolution, saying that Israel should be given more time to accomplish its goal there.

Similarly, in December the U.S. attempted to delay a resolution calling for an end to the violence during Operation Cast Lead, once again affording Israel more time to pound much of Gaza into rubble, including indiscriminate attacks on U.N. locations, schools, hospitals, and civilian residential areas.

Obama came close to acknowledging the suffering of the people of Gaza, but hedged his remarks as a hypothetical instead as actual fact on the ground, saying “if the people of Gaza have no hope, if they can’t even get clean water at this point, if the border closures are so tight that is impossible for reconstruction and humanitarian efforts to take place, then that is not going to be a recipe for Israel’s long-term security or a constructive peace track to move forward.”

Israel has continued to deny that its blockade of Gaza has resulted in a humanitarian crisis situation. Goods Israel has barred from entering include paper for schoolchildren, plastic bags for distributing humanitarian supplies, and cement for reconstruction.

Both Obama and Netanyahu said there was no “linkage” between the so-called “peace process” and progress on the question of Iran.

Going into the talks, Netanyahu was expected to try to get Obama to accept his demand that progress be made towards ending Iran’s nuclear program before any progress towards a two-state solution could be made.

Netanyahu dropped this as a condition, but managed to get a timeline from Obama of about one year to achieve progress on getting Iran to end its nuclear program.

Israel and the U.S. accuse Iran of seeking nuclear weapons, while Iran insists that its nuclear program is designed only for the production of energy. The International Atomic Energy Agency (IAEA), the nuclear watchdog agency, is in Iran monitoring the program and has repeatedly said it has found no evidence of an active nuclear weapons program in the country.

U.S. intelligence analysts have assessed that Saddam Hussein’s  efforts during the 1980’s to produce a nuclear bomb were largely motivated by the arsenal of its Middle Eastern neighbor, a long time enemy of Iraq. In 1981, Israel bombed and destroyed Iraq’s Osirak nuclear reactor, an action which analysts say caused Hussein to take his nuclear program underground and convinced him of the need to obtain nuclear weapons as a deterrent against Israel.

Obama said his administration was “engaged in a process to reach out to Iran and persuade them that it is not in their interest to pursue a nuclear weapon and that they should change course”, a likely reference to the U.S. demand that Iran stop enriching fuel-grade uranium for use in its nuclear program.

To produce a weapon, uranium needs to be enriched to about 90 percent. The IAEA has verified that Iran has so far produced no highly-enriched uranium.

Netanyahu repeated the talking point that that Iran “openly calls for our destruction”, and that “if Iran were to acquire nuclear weapons, it could give a nuclear umbrella to terrorists, or worse, it could actually give terrorists nuclear weapons.”

Similar language was used repeatedly by the Bush administration in characterizing Iraq as a threat in the run-up to the invasion of Iraq. In actual fact, Iraq’s nuclear program had been completely dismantled by the IAEA by the mid-1990’s, and there was no credible evidence that Hussein had restarted the program.

The Obama administration continues to insist that Iran end its enrichment activities, while Iran points out that its right to enrich uranium for the nuclear fuel cycle is guaranteed under the nuclear non-proliferation treaty (NPT) to which it is a signatory.

Administration officials have emphasized that the purpose of the proposed talks would be not to make progress in bettering relations with Iran, but to help get other nations on board with a harsher sanctions regime against the Persian Gulf state.

“The important thing is to make sure that there is a clear timetable of – at which point we say these talks don’t seem to be making any serious progress,” Obama said, adding that “by the end of the year I think we should have some sense as to whether or not these discussions are starting to yield significant benefits, whether we’re starting to see serious movement on the part of the Iranians.”

In a recent interview with Newsweek, Obama said he considered military action against Iran as a possibility. “I’ve been very clear that I don’t take any options off the table with respect to Iran,” he said. “I don’t take options off the table when it comes to U.S. security, period. What I have said is that we want to offer Iran an opportunity to align itself with international norms and international rules.”