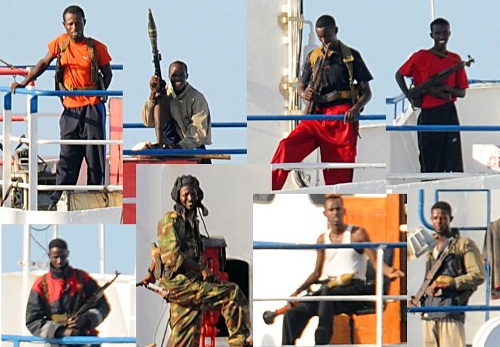 Somali territorial waters have been invaded by foreign fishing trawlers. As a result, thousands of Somali fishermen have been deprived of their vital livelihood. According to High Seas Task Force report, the value of illegally, unregulated and unreported fishing catches fetches from $4 to $9 billion, most of it coming from Sub-Saharan Africa, particularly Somalia.

The root of this problem too originates from the 1991 civil war that led to the disintegration of Somali police and coast guard forces. Cashing in on the chaos in the mainland, illegal fishing trawlers trespass and fish in Somali territory, including the 12-mile inshore artisanal fishing waters. The invading foreign vessels are armed and intimidate Somali fishermen by pouring boiling water on them, cutting their nets, crushing smaller boats and killing all the occupants, and many other abuses in a bid to steal their national fishing turf.

Most of the illegal foreign fishing trawlers that have being fishing in Somalia since 1991 are owned by EU and Asian fishing companies – Italy, France, Spain, Greece, Russia, Britain, Ukraine, Japan, South Korea, Taiwan, India, Yemen and many others.

According to the High Seas Task Force, these illegal foreign vessels take out more than $450 million in fish value out of Somalia annually. They do not compensate the local fishermen, pay tax, royalties, or respect any conservation and environmental regulations – norms associated with regulated fishing. It is believed that IUUs from the EU alone deprive the country more than five times the value of its aid to Somalia every year.

Another serious issue of alarming proportions that Somalis face is the industrial, toxic and nuclear waste dumping in both off-shore and on-shore areas. Local fishermen, civil society organizations and international organizations have reported and warned of the dangerous consequences of these criminal actions and environmental crimes. There have been several incidents of oil spills, toxic and nuclear waste dumping in the Somali coast though no action was taken by international authorities.

The problem does not stop here. The world body, supposed to be unbiased and impartial in its approach, fails to live up to its mandate. The resolutions passed by the United Nations condemned hijackings in the Gulf of Aden and Indian Ocean and gave wide ranging powers to European Union, US, Russia, Japan, India, Korea and many other regional powers to patrol Somali waters under the pretext of containing piracy while they carry out illegal fishing activity unabated.

Naval powers of the world, including US, EU, Russia, Canada and Australia patrol the waters adjacent to Somali coast in a bid to check piracy. It is interesting to note that not a single African naval vessel is included in the international patrols.

Due to the absence of a strong Somali representative in the United Nations, UN Resolutions 1816 and 1838 were passed and enforced. Both the resolutions unilaterally condemn Somali piracy in the Gulf of Aden and Indian Ocean and give the right to foreign naval vessels to patrol Somali waters to keep pirates at bay. These resolutions, however, ignore the objections of the Somali civil society and fail to address their concerns.

Somali lack of authority and unfair and biased treatment meted out by the international community has shoved this rich fishing zone into the mouth of exploitation and subsequent depletion. Whose fault is it? Is it still fair to suggest a military or diplomatic solution of a problem that exists due to the absence of a viable government and civil society? The world may be tempted to apply the ‘might is right’ logic to tackle piracy but is it ready to let the pirates transform into terrorists? The answer will be a definite ‘no’ but the solution lies in delivering justice not just meting out punishment.