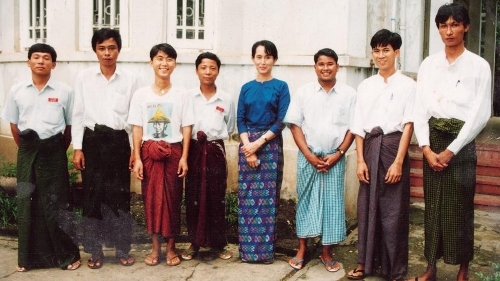 Iqbal with Aung San Suu Kyi (to her immediate left)

, documents a series of conversations between Nobel Peace Prize winner Aung San Suu Kyi and the American author. The National League for Democracy (NLD) leader was asked by Clements how Burma could achieve a democratic revolution through non-violence and overcome a brutal military dictatorship with an army of 400,000 people.

Her answer was simple: “Courage.”

This singular trait, in the eyes of “The Lady”, as Aung San Suu Kyi is affectionately known, is what her supporters and the civilians possess and demonstrate in abundance. Any individual that campaigns for freedom and democracy in Burma will be arrested, interrogated, tortured and locked away.

One man who can account for such horrors is Iqbal, a 39 year old man from Rangoon now living in Melbourne, Australia. He has three sisters living in refugee camps in Thailand, and was a survivor himself of imprisonment and torture before fleeing Burma and reaching Thailand’s largest refugee camp, Mae La, on the Thai-Burma border.

Iqbal’s story is living testimony of the Orwellian nightmare that is carried out daily in modern day Burma. But one characteristic particularly enables him to stand out. Iqbal is a former bodyguard of Aung San Suu Kyi.

Iqbal and I speak through the assistance of a translator and in between sips of green tea he re-traces the path that began prior to the military coup of 1988.

“When I started working for the Mining Ministry, I won two gold medals, in 1985 and 1986, for hurdles in athletics. Each government department held their own sporting competitions every year,” he begins. Iqbal’s salary ranged between 130-170 Burma Kyat ($USD 19-27 today) a month, higher than the regular government worker’s salary. But a lack of government funding forced him to quit, as his salary was not enough to allow for a basic standard of living. Iqbal was also a keen kickboxer, occasionally training at a facility owned by a family member.

In 1988, the death of a student at Rangoon Institute of Technology, as well as civilian protests against the devaluation of the Burmese Kyat led to the 8888 Uprising (named after the day of the uprising’s commencement, August 8, 1988). After weeks of protests, Burmese army soldiers opened fire on crowds around the country and massacred 3,000 people. Thousands more were arrested or fled into the jungles.

As the world saw images of the mass slaughter unfold, Iqbal turned to political activism. He provided security for Botataung township and formed the Tri Colours Flag Students and Youth Organisation. “We guarded Aung San Suu Kyi and the NLD Party between 1988 and 1990, meeting with her and (NLD) officials daily,” he adds. In addition, Iqbal helped take care of administrative duties and management of the NLD.

The Tri Colours Flag Group worked with other opposition groups and, as chief organizer, Iqbal wrote letters and designed pamphlets speaking out against the military regime. “Between 40 and 50 (people) operated in and around Rangoon. We had to move quickly to avoid being detected and arrested by government officials. The Burmese junta attempted to intimidate us and regularly carried out beatings and harassed us all the time,” he explains.

The constant surveillance eventually led to Iqbal being arrested in the lead-up to the 1990 election. He was detained for causing unrest and organizing student demonstrations during and after the poll, which the NLD won but the military junta refused to honor. Iqbal was apprehended by two members of the junta and arrested on November 11, 1990 after attending a demonstration. He resisted his arresters and punched a Burmese Army Major, but was beaten unconscious by between 20 and 30 government military intelligence officers who joined in the attack.

“They had been waiting inside a tea shop and moved in to attack me,” he continues. “The officers knew that I was a kickboxer and that my uncle had run a club for members for the NLD, Tri Colours Flag and other opposition groups.” Two of Iqbal’s friends, a member of the All Burma Democratic Students Federation and another from the All Burma Youth Organization, were also apprehended.

Iqbal was interrogated and beaten by members of both Military Intelligence (MI-3) and the Navy, as he lived close to the port attached to the Rangoon Rover before being subjected to beatings. This began his two and a half year sentence, commencing with a month’s incarceration at the notorious Insein Prison without charge.

“For four days, I was laid on my side and handcuffed behind my back. The navy officers placed a hood over my head so I could not recognize anybody,” Iqbal elaborates. For a moment, I considered getting up from my chair so he could show me exactly what position he was forced into, but I decided against this.

Officers rotated every two hours and on several occasions, Iqbal was beaten by multiple navy officers. “I was deprived of food, water, sleep or medicine. My psychological and mental state was so bad as a result of the pain, I started banging my head on the table incessantly so that I split my head open and (would) receive treatment and hopefully get a reprieve from all of the torture,” he says without pausing. After four days, Iqbal was given one slice of bread, a cup of water and some medicine to treat the head wound. The beatings, however, continued.

In January 1991, Iqbal was found guilty of causing unrest and sentenced to three years hard labour. He shared a prison cell with 200 people, both common criminals as well as political prisoners. Family members and friends were able to visit him once a fortnight for 15 minutes at a time, but prison authorities made them wait in for numerous hours before being given access.

Following his release in 1993, Iqbal’s story became keenly sought after, and he was interviewed by an Australian journalist in Rangoon about his experiences of torture in jail. This material appeared alongside interviews with Aung San Suu Kyi and U Tin U (co-leader of the NLD) for a documentary that appeared on Australia’s ABC TV network in April 1996. The Burmese Embassy in Canberra recorded a copy of this program on videotape and sent it to the military junta in Rangoon.

With a sustained media focus about the documentary’s contents, Iqbal was arrested for a second time in June 1996, again after leaving Aung San Suu Kyi’s residence in Hle Den Junction, near Rangoon University. He was sentenced to seven years jail. The junta also planned to sue Suu Kyi and Iqbal for subversion and for spreading misinformation about the political and social situation in Burma.