The Order to Destroy has been Given 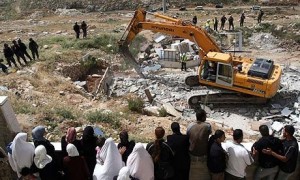 It is Wednesday afternoon on the 5th November. I woke up this morning and was happy. The man who repeatedly exclaimed “Change” and “Yes we can” had done the impossible, had proven that change is possible. Now seven hours have passed and I have gone to Silwan, south of Jerusalem’s Old City. A house is to be demolished and the morning and the happiness feel distant, as if it had been a different time.

The questions aggregated this morning when I within myself still heard Obama’s voice and simultaneously at a distance saw the violence spreading out before me.

Before I reach the house that is to be demolished, I stop for a while and look up at all the windows, at all the balconies, at all the flat roofs. People everywhere. Old, young, women, men. Everyone gazing in the same direction. I am struck by the silence. It is as if someone had said, “Silence, action.”

Many spectators but very few who are moving. Women stand in the shade, away from the sun. An old man behind the soldiers tries to shout something but his cry gets caught behind the bars of despair. I see the desperation in his eyes. I see how his back is bent. I see how the soldier, the soldier who looks like a teenager, shoves him away. He cannot get through. A young soldier carries water bottles, water for all the soldiers.

I turn to the shade and face the women. Contrary to the soldiers with green clothes and heavy weapons I see dignity, no expressions of hopelessness but not hope either. As if one right now is in an inferior position but still has not lost. As if one has lost everything but still has everything left.

I have still not reached the house but am stopped by soldiers on horsebacks. Soldiers that shout at me. I am saved by a photographer from Reuters who begins to speak with me, as if he recognized me. Together we go on, past clusters of soldiers. Past men with combat equipment, men who do not look proud, men who dodge my eyes, men who do not wish to be photographed. There are only some older military men who express a feeling of victory but without showing any joy.

When I reach the site, the film cameras have begun to register, second upon second. The stage is bathing in a clear light as the sun is setting high above us, over the rooftops. For the photographers, this is the best lighting. It is light that creates contrasts, that creates depth against the white limestone walls.

I think, this is not real. I must have walked in on a film set. As if the director had moved from Farö to Jerusalem. As if Ingmar Bergman was adapting Selma Lagerlöf’s book Jerusalem for the screen. In front of me I see how Sven Nykvist shapes his right hand, shapes a three-sided figure to block out the unessential, concentrates and locks the gaze while the director behind him quietly watches. How I wish that it was the case, that in front of me I was watching a performance, acting. That it would have been about a tragedy between father and son. Or that it would have been about Swedish farmers who had left Nas for the holy city. But these feelings subsist for only a short moment.

I am immediately thrown back to reality when the young soldier points with his whole hand while he raises his automatic weapon ten degrees, aiming at the man in the door who is carrying the red carpet, the one that had just covered the floor. A small table had stood on the carpet. Around the table, had been the couch, some armchairs and chairs. This is where they had celebrated Eid and friends had come to visit last Friday. Children had played on the floor and they had drunk strong Arabic coffee.

I have reached the center of the drama. Recently, this morning, I had been sitting at home with tears of joy. As if the elections in the USA were important for me, as if they touched me personally. A young man stood in front of the world and exclaimed the words, “Yes we can.” He had personified that everything is possible, Yes we can, that everything can be changed, Yes we can.

But now, a few hours later, the silence is almost palpable. The neighbor has become an enemy. Hundreds of soldiers, many of them young, a moment ago they were children, now they carry heavy weapons and combat equipment. The order to destroy has been given. The young soldiers who this morning listened to the election results now know that “Yes we can” means something different to what they had thought this morning. Now it means to destroy, dominate, take over, demolish, create despair, humiliate, be in control, be in the center.

In the periphery stands a lonely American diplomat. He registers and takes notes. I am glad and impressed by his presence. When a house is demolished, he is there; when a family is thrown out on the street, he is present. And I begin to believe that something is happening. Someone far away will tonight read what has been written, pass it through the system, rework it, make lists and compilations. Destroyed house after house is put into columns, today there were four houses, so far this year there have been 86 houses destroyed. Someone is listing the number of women, the number of men, the number of children, elderly, sick, the ones who have lost, and by the end of January 2009 the compilation for 2008 will be complete.

Then the silence is broken. The house is emptied. Everything has been brought out and placed in a large pile. Toys, toothpaste, the sofa bed, the yellow teddy bear, plastic flowers, tables, carpets, refrigerators with photos of happy children. The men are forced away, the soldiers’ attentiveness is sharpened. Everyone’s gaze is sharpened. Everyone is looking at the yellow machine, the machine with the large axe, which reminds us of a dentist’s drill. But here there is no one drilling. Here it is not about being careful, here something is to be axed, struck, broken.

Hell is suddenly in front of me, clearly manifested. I stand beside the family that has lost everything. In front of us we see the machine that breaks into pieces, killing all hope.

The young soldier who in a democratic society should protect the weak was not allowed to do so. I see spectators from near and far. Fellow beings, journalists, diplomats and activists. Children who are scared of what they see and who wonder whose house will be demolished tomorrow. I look around and see all the young, all the boys. Boys standing on the roofs, on the balconies, who stand in groups and who begin to talk, begin to point towards the house which is soon a pile of rubble and towards the soldiers. I see young boys who clench their fists in their pockets and who maybe think “Yes we can.”

The young boys stood beside me. They saw a family removing all of their belongings.

They saw the family watching their house become crushed. I can guess what images they will carry within themselves for the rest of their lives.

I saw that too. Together we saw it on BBC and CNN. It is happening in the middle of Jerusalem, a few hundred meters from Via Dolorosa. In the middle of the hopelessness I begin to tell myself that this must be stopped, that together we can stop the madness.

We have to stop saying that it is meaningless, stop all forms of the cynicism that has become part of reality amongst foreigners among diplomats in Jerusalem. There must at the end be some kind of damn law and order in this place.

Those of you who decide over your country’s foreign policy in relation to Palestine are really quite few. Few but powerful when you hold many thousands of families’ homes in your hands. Power must be managed well when your decisions affect the young peoples’ views on democracy and arouse and extinguish dreams.

My mobile phone vibrates. The UN through OCHA writes that three more houses are being demolished today, more people are about to become homeless.