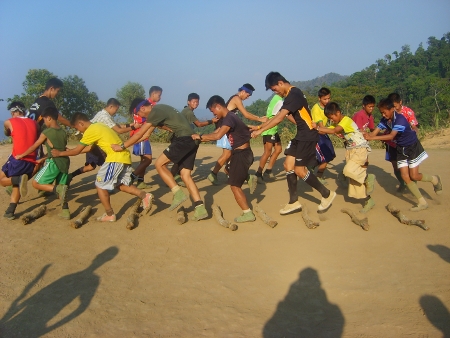 “Football is war minus the guns,” declared George Orwell in reflecting upon his lack of sporting prowess while attending Eton College in the early part of the 20th century.

For the hundreds of orphans residing within the male dormitories at Loi Tailang Internally Displaced Persons (IDP) camp in Shan State, Burma, football is the fantasy escape from the memories of conflict and forced removal from their family homes which has seen boys removed from the care of their parents. Encouraged to get an education as an alternative to joining the Shan State Army, the only lethal shooting performed by boys aged between 10 and 25 years would be achieved courtesy of their deadly accurate feet and an imitation leather ball on the makeshift dusty football pitch overlooking the dense forest.

While each student has more than likely experienced the loss of relatives as a result of the frequent incursions into their village homes by the Burmese military junta, not every person is an orphan in the strictest sense. Some have lost their mothers and fathers, some one parent and others have lost whole families. There are students that have simply been away from home for so long, their own relatives may no longer recognize them. The fate of some parents is unknown and some have gone years without knowing whether their mother or father may have been murdered or remain alive.

Parents shift from one village to the next in search of food and work in relative safety, trying to remain out of sight from the State Peace and Development Council (SPDC) troops ruling Burma with an iron fist. The diverse ethnic minority residents of Shan State attending either the primary or high schools located on the Burma-Thai border three kilometers away have bonded together because without family support, all they have is each other.

The other attribute they have in common is a love of the world game, football. Every day after attending classes, studying for upcoming exams, and well as completing all required domestic chores, up to 30 students gather to play football on the large pothole-filled dusty track that leads up the mountain. If the ball happens to go out of play, there is race on amongst the players to prevent the ball from rolling down the steep hill and dropping approximately 200 meters down the cliff face where only one walking trail exists.

To the right-hand side, younger children have their own smaller pitch to undertake their games. And squeal with delight as they chase a ball around a pit 20 approximately meters long and 10 meters wide.

With all kindergarten classes finished for 2 months, and having recently moved into the teacher’s quarters of the male dormitories, several older students approached me with a special request, one that took me by complete surprise.

“Teacher David, every night our school team plays here, but we do not have anyone to train us. Please be our coach.”

Before I had a chance to even consider the request, I was immediately surrounded by 20 students of all sizes aged between 10 and 23 years old. The decision was practically pre-determined prior to me being asked, so I considered this as an honor, in spite of my lack of ability with the ball. However, my responsibilities now extended to being the most confident person anywhere near the ball, and this had to rub off on anybody interested in playing. Otherwise, there would be no interest.

In Loi Tailing, several males in their late teens and early 20s are still at school completing their basic education. Back in their homelands, attending school was considered impossible because of constantly being on the run from the military junta, or taking on the task of looking after the family farm, tending to the crops and buffaloes, or simply being disallowed from turning up at all by the SPDC. Shan language is banned from being taught at all schools in Shan State by the military authorities, but every student can safely learn their native Shan tongue. Each grade contains a great disparity in ages amongst students. Students can take advantage of the chance to go to school rather than move from their villages into towns, on the run from persecution and being captured by the SPDC to become porters and worked until exhaustion and death.

In the squad of players standing before me, a handful of students never went to school until their 16th birthday just so the family could continue to live. One squad member commented that his mother, if still alive, would not recognize him because he left his homeland so long ago and to risk a return would heighten the possibility of arrest and torture for being associated with the Shan State Army, or SSA.

Motivating a team that really does want to improve is not difficult. Football is a game that brings people of all walks of life together even in the most adverse circumstances. The challenge is to find effective strategies that assist with improving ball skills and fitness in isolation and gradually incorporate them into a fully fledged match. Also, exercises have to be fun. The life for students here is difficult and considering the hardships faced in living, attending classes, affording school materials and keeping abreast of all other tasks, recreational pursuits should involve learning and laughing. Nobody was expecting me to be a supercoach. The students wanted somebody they could enjoy their favorite pastime with. While teaching in the classroom requires measurements such as testing to demonstrate effectiveness of communication and teaching capabilities, sporting activities involve predominately listening and watching. However, in both cases, keeping and maintaining their attention is the key to a successful session. That means simple explanations, less non-essential talking, and short drills that constantly change before boredom sets in.

In a 60 minute session, the squad and I would open up with a warm-up lap around the perimeter of the orphan dormitories. I viewed my participation as a means of encouraging everybody to do their best, although I deliberately stayed behind the pack. We were all being watched by interested on-lookers, curious as to why a farang (foreigner) was barking out instructions in a fun nature like an army general. One group of students played rakktan with a bamboo ball and string for a net on a small makeshift court next to one dormitory; another group played a form of bocce with disused and leaking batteries, and men and women trudged up the mountain and cut through the open path, weary from their day in the forest hunting wild animals, and collecting vegetables, firewood and bamboo tree leaves.