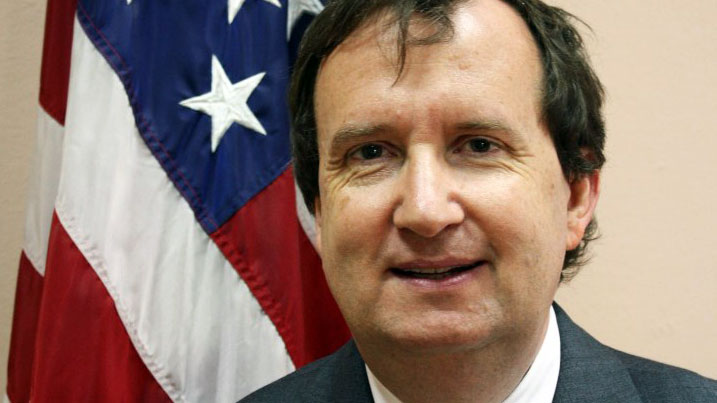 American officials downplay how “allies” such as Turkey and Saudi Arabia support terrorists lest the US government’s support of terrorism also be exposed.

We know that U.S. ambassadors tend to be bureaucratic and boring.

If you challenge them forcefully, however, the resulting outbursts can provide stunning insights into their ineptitude and State Department policies.

Consider the mind-boggling statements made by then-Ambassador to Armenia Richard M. Mills during the Q & A at Holy Trinity Armenian Church in Cambridge, MA.

I had bluntly questioned Mills about the Turkish government’s support for ISIS and similar jihadist/terrorist organizations.

Though this occurred two years ago (March 3, 2016), his answers remain relevant to America’s so-called “War on Terror” and the ongoing wars in Syria and Iraq.

When posing my question, I said that I would be handing everyone in the audience a study titled “Research Paper: ISIS-Turkey Links” by Columbia University’s Institute for the Study of Human Rights.

Dr. David L. Phillips, director of its Program on Peace-building and Human Rights, oversaw the study. The widely published Phillips is a foreign affairs adviser for the State Department and the United Nations.

Using dozens of sources, the study definitively established that Turkey was providing weapons, ammunition, financing, transportation, training, and recruits to ISIS in Syria and Iraq and to other terrorist groups such as al-Nusra, an al-Qaeda offshoot.

Incredibly, Mills angrily replied that Turkey had not helped jihadists/terrorists in any way.

The ambassador even claimed that if some jihadists had entered Syria from Turkey they did so only by sneaking past Syrian refugees who were crossing in the opposite direction. To its credit, the polite Armenian American audience refrained from laughing.

Mills’ hyperbolic defense of Turkey was particularly incongruous as American-Turkish relations were even then headed downhill toward today’s quagmire.

Moreover, the ambassador’s vindication of Turkey went even further than had the Obama administration.

Indeed, in a rare moment of frankness Vice-President Joe Biden himself told a Harvard University audience (Oct. 2, 2014) that “our allies” Turkey, Qatar, Saudi Arabia, and UAE were “our largest problem in Syria … giving hundreds of millions of dollars and thousands of tons of weapons” to jihadist organizations.

Though Biden never withdrew his statements, Pres. Obama soon forced him to apologize to Turkey and UAE to spare them and America further embarrassment.

Yet the New York Times, in a September 13, 2014, article titled “Struggling to Starve ISIS of Oil Revenue, U.S. Seeks Assistance From Turkey”,  had reported that “the Obama administration is struggling to cut off the millions of dollars in oil revenue that has made [ISIS] one of the wealthiest terror groups in history, but so far has been unable to persuade Turkey … where much of the oil is traded on the black market, to crack down on an extensive sales network. Western intelligence officials … track the ISIS oil shipments [from] Iraq [into] Turkey.”

As a State Dept. official, Mills blundered by exonerating Turkey.  In so doing, he demonstrated that the “War on Terror” was less about stopping terrorism than about shielding an ally from terrorism charges.

I pointedly asked him about terrorism expert Yossef Bodansky who in 1999 had documented numerous instances of jihadists, including Chechens and Afghans, using Azerbaijan as a base.

Yet the FBI had found that al-Qaeda used Baku, Azerbaijan, as a communication and logistical base for 1998’s fatal bombings of American embassies in Kenya and Tanzania.

Moreover, in the early 1990s Azerbaijan imported thousands of Afghan Mujahideen, as well as Chechen and Turkish, mercenaries to fight against Armenians in the Karabagh/Artsakh war.

Ambassador Wilson thus gratuitously covered for Azerbaijan’s involvement with jihadists/terrorists just as Ambassador Mills would later do for Turkey.

Furthermore, Azerbaijan’s Silk Way Airlines has reportedly been ferrying billions in weapons (including from the U.S.) to jihadists in Syria. Silk Way is apparently owned partly by Azerbaijani President Ilham Aliyev’s family.

The inept Wilson also called lham Aliyev — who hadn’t yet inherited the throne from his father Heydar Aliyev — an idiot or similar insult.

She abruptly announced that Wilson’s presentation was now “off the record.”

Since 9/11, I’ve asked two U.S. ambassadors to Armenia this question: Given America’s so-called global “War on Terror,” why do you never mention that Armenia has an exceptionally strong anti-jihadist/terrorist record compared to other countries within a thousand mile radius or more?

Indeed, Armenia has had no jihadist citizens, hasn’t supported jihadists, and hasn’t served as a jihadist base or transit route.

Neither ambassador provided a cogent answer though one said that Armenia is mainly Christian so wouldn’t be expected to be associated with jihadists.

Yet neighboring Georgia, which jihadists have used as a base and pass-through is also mainly Christian. And witness the many jihadist cells and terror attacks in Christian Europe.

What “War on Terror”?

The four ambassadors’ reactions we described reinforce what many experts believe:

America’s “War on Terror” has largely morphed into a cover for the State Department’s and some American lobbies’ geopolitical agendas — such as deposing Syrian President al-Assad.

After all, given the chance to criticize Turkey, Azerbaijan, and others for supporting jihadists, Ambassadors Mills and Wilson refused to do so.

American officials downplay or outright deny the support that U.S. “allies” such as Turkey and Saudi Arabia provide jihadists/terrorists lest our own nation’s support of terrorism also be exposed.

Similarly, American officials never praise Armenia’s fine record on jihadism/terrorism because as we pointed out the “War on Terror” is primarily not about terror/jihadism.

Lynne M. Tracy has been nominated to replace Richard Mills as ambassador to Armenia.

The Senate Foreign Relations Committee should grill her on the same terrorism subjects, and more, that I raised with other ambassadors.

If citizens do not successfully push Congress to fully expose America’s and its “allies” roles in supporting jihadists/terrorists, we have only ourselves to blame.