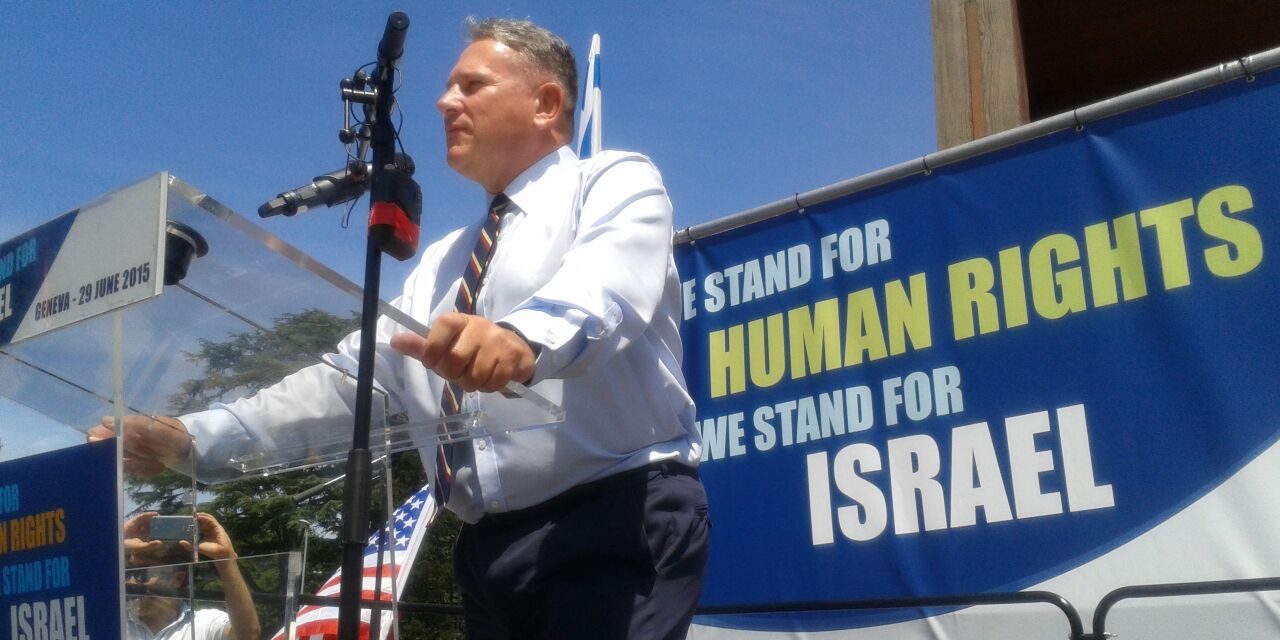 Retired British colonel, Richard Kemp, has been an ardent supporter of Israel’s three major military operations in Gaza conducted over the last six years. He has collaborated on several occasions with the two notoriously pro-Israeli NGOs, UN Watch and NGO Monitor, serving on the Advisory Board of the latter and appearing as star witness under such auspices at the UN, most recently at a two-day side event at UN Headquarters in Geneva devoted to condemning the UN Commission of Inquiry (COI) Report on the Gaza War of 2014.

There is no doubt that Col. Kemp has the credentials to speak as a counterinsurgency specialist, having served as commander of British forces in Afghanistan and elsewhere, where he acknowledges close cooperation with Mossad and the influence of Israeli tactics. In fairness, Kemp writes from such a militarist view with little effort to assess the relevance of international humanitarian law, treating ‘military effectiveness’ as determined by military commanders as the defining criterion of legality for a challenged battlefield practice. In his own words, “It’s the dispassionate military perspective that I bring.” Of course, such an outlook ignores the relevance of international criminal law, which is to superimpose accountability as a constraining framework on this ‘military perspective.’ Actually, Kemp doesn’t so much ignore international criminal law as to (mis)interpret its rules so as to vindicate the tactics of the counterinsurgent side while condemning those of the insurgent.

On June 25, 2015 the New York Times published an opinion piece by Kemp assessing the UN Report. What I find scandalous and perverse on the part of this self-claiming authoritative media source is to have published such a harsh and partisan dismissal of a prudent and overly balanced report without any kind of offsetting piece. I can only imagine the furor that would have been provoked if the Times had published a piece by an expert in international criminal law, say William Schabas or John Dugard, calling for the indictment and prosecution of Israel’s political and military leaders on the basis of the Report. At least, if such a piece had been published alongside the Kemp article, Times readers could have been exposed to the realities of controversy flowing from these UN allegations that Israel (and to a far lesser extent, Hamas) was guilty of war crimes.

Kemp begins his article with the claim that “it pains me greatly to see words and actions from the UN that can only provoke further violence and loss of life.” As if ‘law’ imposed on the powerful—and not their weaponry—is responsible for violence and the loss of life in Gaza. We are not told exactly how he reaches this perverse conclusion, but presumably Kemp believes that the condemnation of Israel’s use of indiscriminate and disproportionate force would embolden Hamas, and Palestinians generally, to continue to claim a right of resistance. What Kemp (and Israel) obviously seek is a circumstance in which whatever the dominant military forces do is validated by its effectiveness, and what a population under domination does in opposition is condemned with the implication that resistance to Israel’s prolonged occupation is inherently unlawful.

Kemp’s puff piece is filled with bland endorsements of Israel’s most blatant propaganda. For instance, Kemp asserts, in complete disregard of the evidence, that Israel imposed the blockade on Gaza “only in response to attacks by Hamas.” Yet it is common knowledge, even in Israel, that the blockade has been maintained since 2007 as a ‘collective punishment’ imposed on the civilian population of Gaza, having little to do with security, and mainly sustained by way of rigorous monitoring of all crossings to and from Gaza and with Egypt’s cooperation at Rafah during the Mubarak era and since Sisi’s ascent.

Kemp has nothing to say about Israel’s frequent lethal incursions into Gaza that have accompanied the occupation since it started in 1967, and he uncritically supports Israel’s distorted one-sided timeline that claims Israel only attacks in retaliation for missiles and mortar fire from Hamas, and never initiates violent interactions by on its own. Kemp also never refers to the ceasefires broken by Israel, as in the leadup to Operation Cast Lead at the end of 2008. Instead, as Kemp has written elsewhere of this earlier brutal attack on a vulnerable, caged population, “I can only say this: during Operation Cast Lead, the IDF did more to safeguard the rights of civilians in the combat zone than any other army in the history of warfare.”

Most disturbingly, Kemp writes in a condescending manner as follows: “The report is characterized by a lack of understanding of warfare,” as revealed by its failure to compare what Israel is doing with what the U.S. and Britain have done in Afghanistan, Iraq. In Kemp’s words, “Israeli tactics are no different than those used extensively by American and British forces in similar circumstances.” What is most dangerous about this counterinsurgency worldview is its implicit reasoning that allows such conclusions to be set forth in good faith by professional soldiers. To begin with, Kemp is essentially correct that the counterinsurgency wars waged by the U.S. and Britain have relied on similar tactics, but does that make Israel’s pattern consistent with international law and morality? Most international law assessments of these uses of modern weaponry against densely populated civilian areas consider such tactics to be severe war crimes, not models to be invoked as validation.

Kemp’s state of play is revealed here: converting past crimes into authoritative precedents to justify present crimes, or to transform crimes into legitimate counterinsurgency tactics.

Beyond this, Israel’s tactics are worse in some instances than those of its predecessors. Whereas in Vietnam, the United States used its far less precise air power to inflict heavy casualties on the Vietnamese civilian population, it refrained from attacking urban population centers as Israel did in the Gaza attack of 2014, as well as the earlier ones. Even in Falluja, the worst instance of American firepower directed at a city believed to be a center of insurgent opposition in Iraq to American occupation, the population was given ample time to vacate the city after warnings of impending attack. In contrast, except for the 800 Palestinians that held foreign passports who were allowed to leave Gaza, the remainder of the civilian population in Gaza was locked into the combat zone, losing even the desperate option of fleeing to safety by becoming a refugee. Col. Kemp, invoking his counterinsurgency experience and knowledge, never sees fit to mention such a damning ‘detail.’

Nor does he bother to point out that the whole of Gaza was a combat zone, and that civilians, including women and children, had no place of sanctuary and safety, other than to seek refuge in UN facilities and mosques, which then were turned into targets because of Israeli claims that weapons were stored in these places.

Parroting the worst elements of Israeli hasbara, Kemp sets forth this grotesque characterization of Hamas tactics: “Unable to inflict existential harm on Israel by military means, Hamas sought to cause large numbers of casualties among its own people in order to bring condemnation and unbearable diplomatic pressure against Israel.” To make such an extreme allegation without bothering to cite evidence is to portray Hamas as seeking the genocidal annihilation of its own people. This is an odd accusation in view of the evidence that Hamas gained more popular support from the Gazan population after this Israeli attack than before, presumably because of its steadfastness under the most severe of pressures. Also, Kemp withholds comments on the repeated and strenuous efforts of Hamas to seek the renewal of the ceasefire prior to the initiation of the Israel onslaught in early July of 2014.

In effect, Kemp is appraising Israel’s behavior on the basis of the ‘new normal’ prevailing among counterinsurgency hawks that have led the West into war after war in its futile effort to defer the death of European colonialism, and its American sequel. What is done by the West is justified by military effectiveness (although without noticing that these wars have all been eventually lost), what is done by the forces of national resistance is criminalized if not demonized as ‘barbarism.’

It is not surprising that UN Watch and NGO Monitor organized an elaborate side event at the Palais des Nations in Geneva last week that featured Richard Kemp as its lead speakers, but included an array of other counterinsurgency specialists, with no attempt whatsoever to bring to bear the perspectives of international humanitarian law except in the spirit of Israeli apologetics. It is notable that, unlike the response to the Goldstone Report in 2009 that featured denunciations of bias and personal attacks, the orchestrated reaction to the COI report is more sophisticated, relying on a variety of substantive reports that set forth Israel’s claims of justification, a media blitz, along with major advocacy efforts by Israel’s well-trained NGO poodles.

A welcome contrasting vision, closer to law, morality, and reality is offered by Max Blumenthal in his new book, The 51 Day War: Ruin and Resistance in Gaza (2015). David Swanson, the noted anti-war activist, titles his review of Blumenthal’s book, “the 51-day Genocide”. As Swanson puts it, “I can think of a few other words that characterized the 2014 assault on Gaza in addition to ‘war,’ among them, occupation, murder-spree, and genocide. Each serves a valuable purpose. Each is correct.”