Obama’s Revisionist History on Ending the Iraq War: A Lesson from the 3rd Presidential Debate 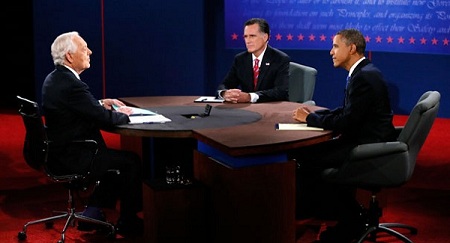 There was an instructive moment in the third presidential debate between Barack Obama and Mitt Romney, which focused on U.S. foreign policy, when they got into a spat over the withdrawal of U.S. forces from Iraq.

The spat began when Obama criticized Romney by saying, “[J]ust a few weeks ago, you said you think we should have more troops in Iraq right now…. You said that we should still have troops in Iraq to this day.”

Romney responded, “[W]ith regards to Iraq, you and I agreed, I believe, that there should be a status of forces agreement…”

Obama interrupted, shaking his head and stating, “That’s not true.”

“No,” Obama replied. “What I would not have done is left 10,000 troops in Iraq that would tie us down. That certainly would not help us in the Middle East.”

Obama shot back, “This was just a few weeks ago that you indicated that we should still have troops in Iraq.”

Romney replied, “I indicated that you failed to put in place a status of forces agreement at the end of the conflict that existed.”

Obama got the last word in, saying, “You’ve got to be clear, both to our allies and our enemies, about where you stand and what you mean. You just gave a speech a few weeks ago in which you said we should still have troops in Iraq. That is not a recipe for making sure that we are taking advantage of the opportunities and meeting the challenges of the Middle East.”

Obama’s denials and comments about being “clear” on “where you stand and what you mean” are remarkable in light of the actual facts in this case. A review of the actual history would seem to be in order.

While Obama is fond of taking credit for ending the war in Iraq, in fact, the Status of Forces Agreement (SOFA) under which all U.S. combat troops were withdrawn at the end of 2011 was signed on November 17, 2008, under the Bush administration. Obama was critical of the SOFA, his publicly stated position being that the troops should be withdrawn sooner. “In contrast,” the New York Times noted at the time, “President-elect Obama had campaigned under a promise to withdraw all American combat brigades from Iraq by May 2010”.

Obama not only did not keep that promise, but his administration sought since as early as September 2010 to obtain a new agreement with Iraq under which 15,000 to 20,000 combat troops would remain beyond the deadline at the end of 2011; but “Obama insisted that it could only happen if Maliki requested it”, wrote investigative historian and journalist Gareth Porter, since the White House “was worried about losing support from the Democratic Party’s anti-war base as Congressional mid-term elections approached”. The Wall Street Journal similarly pointed out that “Mr. Obama could face a political backlash at home if he doesn’t meet his campaign pledge to bring troops home from Iraq”, and by April 2011, the U.S. had dropped the number of troops it sought to keep in Iraq down to 10,000. The discussions over a new agreement “face political obstacles in both countries,” the Journal also noted, “and have faltered in recent weeks because of Iraqi worries that a continued U.S. military presence could fuel sectarian tension and lead to protests similar to those sweeping other Arab countries”.

Indeed, protests against any renegotiation of the SOFA were growing. At the end of April, in Mosul, “around 5,000 people, including provincial council members and tribal leaders, rallied in the main square against extending the U.S. troops presence beyond the year-end deadline”, Reuters reported. “The Americans”, however, the New York Times reported, “are privately telling their Iraqi counterparts that they want to stay.”

By July, the U.S. was growing impatient, driving Secretary of Defense Leon Panetta to tell Iraqi leaders, “Dammit, make a decision”. In August, an optimistic Panetta said that the Iraqis had agreed to negotiate an extension of the troop presence. “My view is that they finally did say, ‘Yes’”, he told reporters. A media adviser to Iraqi Prime Minister Nouri al-Maliki quickly issued the statement, “We have not yet agreed on the issue of keeping training forces”.

The Iraqis continued to push back, and by September, the Americans had reduced the number of troops that would remain to 3,000 to 4,000, which, although “significantly fewer forces” than previously proposed, the New York Times observed, still “would break a longstanding pledge by President Obama to withdraw all American forces from Iraq by the deadline.”

Although scaling back the number of troops it sought to keep in Iraq, the U.S. continued to insist that any remaining troops should be granted immunity from Iraqi law, a condition Iraqi leaders refused to accept.

On October 15, a New York Times article filed from Baghdad reported that, “An Obama administration proposal to keep a few thousand American troops here after the end of the year to train the Iraqi military is being scaled back, as the administration has concluded that the Iraqi Parliament would not give the troops legal protection” (“protection” being the Times’ euphemism for “legal immunity”). The Associated Press the next day reported that “The U.S. is abandoning plans to keep U.S. troops in Iraq past a year-end withdrawal deadline”, a decision that “ends months of hand-wringing by U.S. officials over whether to stick to a Dec. 31 withdrawal deadline that was set in 2008 or negotiate a new security agreement”.

On October 21, 2011, Obama gave a press briefing in which he stated that, “As a candidate for President, I pledged to bring the war in Iraq to a responsible end…. After taking office, I announced a new strategy that would end our combat mission in Iraq and remove all of our troops by the end of 2011”—a “new strategy” that in fact was a reneging of his promise to remove combat troops by May 2010 and which was in fact just the same old policy that was put into place under the Bush administration. Obama continued, “So today, I can report that, as promised, the rest of our troops in Iraq will come home by the end of the year. After nearly nine years, America’s war in Iraq will be over.”

The New York Times reported, however, that “dismayed” top Pentagon officials saw Obama’s remarks “as the president’s putting the best face on a breakdown in tortured negotiations with the Iraqis”, a failure for “negotiators who labored all year to avoid that outcome”. Obama “was willing to support a continued military presence”, as the Times put it, and “was prepared to leave up to 10,000 soldiers to continue training and equipping the Iraqi security forces”, but later “the Americans settled on the 3,000 to 5,000 number”. The Times account continued:

This month, American officials pressed the Iraqi leadership to meet again at President Talabani’s compound to discuss the issue. This time the Americans asked them to take a stand on the question of immunity for troops, hoping to remove what had always been the most difficult hurdle. But they misread Iraqi politics and the Iraqi public. Still burdened by the traumas of this and previous wars, and having watched the revolutions sweeping their region, the Iraqis were unwilling to accept anything that infringed on their sovereignty.

Acutely aware of that sentiment, the Iraqi leadership quickly said publicly that they would not support legal protections for any American troops. Some American officials have privately said that pushing for that meeting — in essence forcing the Iraqis to take a public stand on such a controversial matter before working out the politics of presenting it to their constituents and to Parliament — was a severe tactical mistake that ended any possibility of keeping American troops here past December.

President Obama’s speech formally declaring that the last 43,000 U.S. troops will leave Iraq by the end of the year was designed to mask an unpleasant truth: The troops aren’t being withdrawn because the U.S. wants them out. They’re leaving because the Iraqi government refused to let them stay.

Obama campaigned on ending the war in Iraq but had instead spent the past few months trying to extend it….

In Washington, many Republican lawmakers had spent recent weeks criticizing Obama for offering too keep a maximum of 3,000 troops in Iraq, far less than the 10,000-15,000 recommended by top American commanders in Iraq. That political point-scoring helped obscure that the choice wasn’t Obama’s to make. It was the Iraqis’, and recent interviews with military officials in the country provided vivid evidence of just how unpopular the U.S. military presence there has become—and just how badly the Iraqi political leadership wanted those troops to go home….

Ironically, a war launched, at least in part, to bring democracy and political freedom to Iraq will now come to an end precisely because of the free expression of those opinions. Iraqis from all backgrounds and beliefs wanted U.S. troops to leave.

So, getting back to the debate, Romney was being honest and Obama was, well, lying. But that’s beside the point. What makes their exchange so enlightening is the fact that you have the two establishment presidential candidates engaging in a debate over the withdrawal from Iraq in which the Democratic incumbent brags how he ended the war after breaking his promise to bring the troops home sooner than would occur under the status of forces agreement signed during the Bush administration and after unsuccessfully trying to renegotiate that agreement in order to keep U.S. forces in the country and the Republican challenger criticizes the president solely on the grounds that he failed in that effort.

That little snapshot from the debate pretty much sums up the nature of the differences between Obama and Romney on matters of foreign policy.