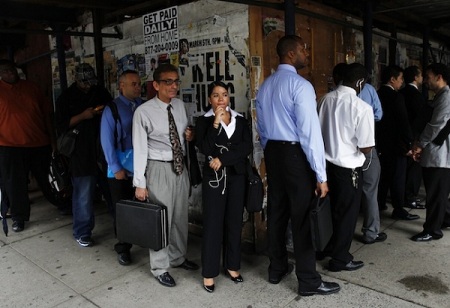 Friday’s payroll jobs report says that 96,000 new jobs were created in August and that the unemployment rate (U.3) fell from 8.3% to 8.1%.  As 96,000 new jobs are not enough to keep up with population growth, the decline in the U.3 unemployment rate was caused by 368,000 discouraged job seekers giving up on finding employment and dropping out of the work force as measured by U.3.  Discouraged workers are not included in the U.3 measure of unemployment, which makes the measure useless. The only purpose of U.3 is to keep bad news out of the news. The U.3 unemployment rate only measures those who have not been discouraged by the inability to find a job and are still actively seeking employment.

The government produces another unemployment measure, U.6, which includes people who have been discouraged by the inability to find a job and have been out of the work force for less than a year.  This measure of unemployment is 14.7%, a number that would get attention if reported.

When the long-term (more than one year) discouraged workers are included, the US unemployment rate is about 22%.  In other words, the real US rate of unemployment is almost three times higher than the reported—headline rate—of 8.1%.

Let’s have a look at those 96,000 jobs.  What kind of high-tech, high-income super jobs is “the world’s only superpower, the indispensable nation, the world’s greatest economy and capitalist heaven” creating?  The answer is lowly paid third-world jobs, which is why there is not and cannot be an economic recovery.  All the good jobs have been moved offshore in order to maximize the incomes of the rich.

So, 52% of the new jobs created by the American superpower are lowly paid waitresses, bartenders, practical nurses, and hospital orderlies.

Highly paid manufacturing jobs declined by 15,000. The incomes lost by these jobs most likely exceed the income gains from the waitresses, bartenders, and hospital orderlies jobs.

Professional and business services gained 28,000 jobs, primarily in computer systems design and related services (mainly Indians on H-1B work visas) and management and technical consulting services (mainly former corporate professional employees who now eke out a living by consulting, without pension or health benefits, with their former employers; in other words, they are working the same for less).

These three categories account for 81% of the new jobs.

Where are the remainder?

And there you have it. The “powerful American economy” is an economy that cannot produce its own clothes and shoes, or the manufactured products, including high technology products, that it consumes, or its own energy, all of which it imports by issuing more debt.

The “great hegemonic American economy” is on the verge of total collapse, because the only way it can pay for the imports that sustain it is by issuing more debt and printing more money.  Once the debt and money creation undermine the dollar as world reserve currency, the US will become overnight a third world country, much to the relief of the rest of the world.

Last week Mr. Draghi, the head of the European Central Bank, announced for propaganda purposes that the ECB would buy up the sovereign debt of the troubled EU member governments if, and only if, the assisted member governments agreed to the conditionality that would be imposed.

In other words, Draghi told Greece, Spain, and Italy that the ECB will buy your bonds if you do what we tell you. Draghi’s conditions are a combination of austerity on the countries’ populations and the surrender of the countries’ financial sovereignty.  Since the troubled debtor countries already had that option, Draghi’s scheme doesn’t change anything.  However, the NY StockExchange used Draghi’s announcement to gin up day-trading profits.

Draghi says that the money that the ECB will pour into purchasing Greek, Italian and Spanish bonds will be offset by draining reserves from the European banking system, hardly a helpful operation to stressed banks and European recession.

It is difficult to image worse news than Draghi’s. Yet, stock markets rose. This result is more evidence that financial markets are not to be trusted.

But you will never, ever, hear this fact from the financial press.

A financial system based on lies and deceptions cannot forever last.