Why Iran Should Sue the U.S. at the International Court of Justice 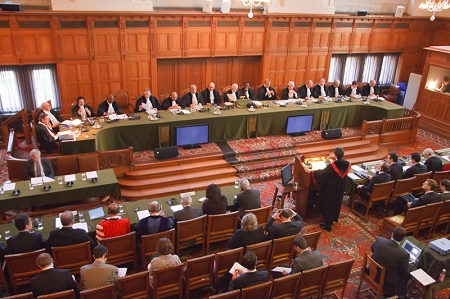 “The indisputable facts of the US-led sanctions case warrant the imposition by the ICJ of Restraining Orders designed to prevent a military attack on Iran, to prohibit any type of blockade of Iran and cease the imposition of further economic sanctions against Iran, and also their efforts of securing more sanctions against Iran at the United Nations Security Council. The Restraining Orders should also seek to prohibit the US and its allies from advocating aggressive military actions against Iran and to negotiate with Iran in good faith over the dispute concerning nuclear re-processing.”

This observer’s best ever (and shortest) job involved “sort of” representing Iran before The Hague-based International Court of Justice back in the ancient history days of 1980 following the American hostage events when the US government sued the new Islamic Republic of Iran before the ICJ under Articles 22 (2), 24, 25, 26, 27 and 29 of the 1961 Vienna Convention on Diplomatic Relations as well as Article 111 (4) of the 1955 Treaty of Amity, Economic Relations and Consular Rights (USA/Iran).

How I got the job following the collapse of Ted Kennedy’s long-shot incumbent challenging primary presidential campaign where I worked on the issues staff, was that Iran’s Charges D’affaires at its UN mission, Mr. Ali A, contacted US Senator James Abourezk who had just left the Senate and opened a law office in Washington DC, as James organized the Arab American Anti-Discrimination Committee (ADC) and worked for the cause of Palestine.

The Iranian revolutionary government hired James’ law firm to represent Iran in the matter of the American government’s application at the ICJ. Or so we were given to understand.

My job description could not have been better. It involved immediately putting together an international legal team of ICJ specialists and moving to The Hague to function as “case coordinator” and liaise with the World Court administration, monitor our case, making sure of timely filings, keep an eye on what the legal team on the other side was up to at the Court, and sundry other tasks.

I quickly lined up three legal giants from my alma mater, the London School of Economics, including the scholarly, quiet, always deferential, and understated Dr. Bin Cheung, son of the former Foreign Minister from Taiwan; the posh, upper-upper British crust and elegant Professor David Johnson, who was my thesis advisor; and the out-of-control, bipolar, extremely abrasive, indefatigable and brilliant University of London International lawyer, Georg Schwarzenberger. I still recall the short, portly, bald-headed “misogynous tyrant” (as some of his female students referred to “Herr Professor”) telling me in his heavy German accent, “Ve shall crush zee Americans at Den Hague!” and I had no doubt that with him as lead counsel we would have.

One of the many stories about the prolific Professor Schwarzenberger (his classic law treatise, Principles of Public International Law remains unmatched on jus cogens legal theory), was that in Germany during the early 1930’s, there were two dynamic and powerful egotistical personalities with nearly hypnotic charisma, plenty of fanatical supporters, and insatiable personal ambitions, who were bound to clash, probably sooner than later, and that post-Weimer Germany could not contain them both.

As it turned out, Adolf Hitler stayed, Georg Schwarzenberger departed for England, and the rest is history.

I packed my bag, and contacted my former landlady who had rented me a room three blocks from the ICJ, when I studied at the Academy of International Law at the Palais de le Paix. While looking for my passport, I got a phone call from my colleague at James’ office.

Long story short, our job was over. Finished. Khalas! We were essentially fired or at least not formally hired.

Ali A had just called James from the Iranian Mission at the UN and advised that Ayatollah Khomeini himself had personally decided not to continue with our work or to dignify the American application with a responsive pleading which we had been preparing day and night for six weeks!  We were in shock.  How could this be?  For sure we were going to win this case big-time or so we all believed.

The Khomeini decision cast the template for three decades of default judgments against Iran by America and Israel.

In “our” case, the ICJ’s 15 judge Tribunal, sitting en banc, politely expressed pro forma “regret that Iran did not appear before this court to present its responses.” The absence of Iran from the Court proceedings automatically brought into operation Article 53 of the ICJ Statute, under which the Court in default cases, is required, before finding in the Applicant’s favor, to satisfy itself that the allegations of fact on which the claim is based are well founded. Absent Iran, the American Application (Complaint) won on all points. During the intervening 32 years, Iran has lost every case brought against it in US Courts, never once on the merits but via default judgments that will eventually total more than ten billion dollars with more than half a dozen cases pending with the same predictable result.

Many, even in the US government, continue to hold that culpability in the Marine barracks attack is undetermined. For example, former Secretary of Defense Caspar Weinberger stated in 2002, 20 years after the bombing: “But we still do not have the actual knowledge of who did the bombing of the Marine barracks at the Beirut Airport, and we certainly didn’t then.”

On July 3, Israel’s third favorite US Federal District Judge, Royce Lambeth, delivered another example of what many in the Zionist lobby considers his best judicial work. Judge Lambeth, in the eighth case against Iran on unproven allegations regarding the same incident, ordered Iran to pay yet another huge default judgment, this time $813 million in damages and interest to the families of 241 US soldiers killed in the 1983 bombing of a Marine barracks in Lebanon. In his latest decision Lambeth stated that Tehran had to be “punished to the fullest extent legally possible under the law” and appeared to boast when he wrote in his ruling that “After this opinion, this court will have issued over $8.8 billion in judgments against Iran as a result of just this one 1983 Beirut bombing.”

In 2007, under a law allowing foreign governments to be sued in US courts, Lambeth ordered Iran to pay $2.65 billion to victims’ families, an amount he wrote at the time “a number of other Beirut bombing cases remain pending, and their completion will surely increase this amount.”

Earlier, on September 8, 2003, Judge John Bates of the US District Court in Washington DC awarded $123 million to 29 American victims and family members of Americans killed in the 1983 bombing of the US Embassy in Beirut.

However unjust, Iran will continue to lose every pending case and every future case by default unless it decides to use the judicial remedies available to it and take the initiative; for example, in the US-organized economic sanctions case which is becoming extremely dangerous given US, UK, and French plans to use them to achieve regime change in Tehran. A joke among Washington DC lawyers is that if one in their ranks suffers from depression because he/she has never won a single case during their entire career, their psychiatrist will prescribe as therapy that the depressed lawyer sue Iran because for sure they will win that case.

The Islamic Republic can halt and even reverse the historic trend by filing an action at the International Court of Justice against the US, France, the UK and their allies, perhaps part of a class action case on behalf of all Iranian citizens being harmed by illegal and political economic sanctions. The US and the European Union (EU) have imposed several rounds of sanctions to pressure Iran to give up its uranium enrichment activities.

On July 8, an EU oil embargo against Iran took effect. There is in fact no probative evidence that Iran is engaged in a nuclear weapons program. The latest International Atomic Energy Agency report once again failed to produce a smoking gun, despite the best efforts of its new director general, Yukiya Amano—described in a WikiLeaks cable as “solidly in the US court on every strategic decision.” In February of this year, supreme leader Ayatollah Ali Khamenei declared “Iran is not seeking to have the atomic bomb, possession of which is pointless, dangerous and is a great sin from an intellectual and a religious point of view.” It is also the unanimous judgment of the U.S. intelligence community, declared in 2007 and affirmed in 2011, that Iran has abandoned any program to build nuclear weapons.

The immediate filing of an Iranian action before the ICJ has been proposed over the past couple of years, and most recently by, among others, Professor Francis Boyle and Mohammad Nahavandian, head of Iran Chamber of Commerce, Industries and Mines. Iran taking the sanctions case to the world court would also advance accountability under international law and because the ICJ would likely grant Iran’s Petition for Interim Measures of Protection the sanctions could be suspended during the course of the years of litigation which would directly and positively affect the lives of suffering Iranians while giving the parties a chance to settle their differences peacefully using diplomacy.