U2, Bono? Celeb partners with Monsanto, G8, to biowreck African farms with GMOs 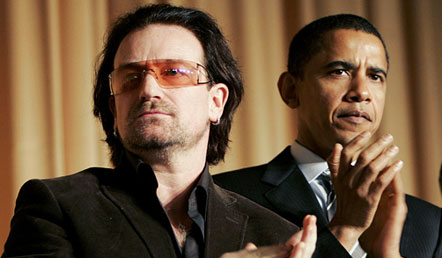 At the G8 Summit held two weeks ago at Camp David, President Obama met with private industry and African heads of state to launch the New Alliance for Food Security and Nutrition,[1] a euphemism for monocultured, genetically modified crops and toxic agrochemicals aimed at making poor farmers debt slaves to corporations, while destroying the ecosphere for profit.

And Bono, of the rock group U2, is out shilling for Monsanto on this one.[2]

It’s phase 2 of the Green Revolution. Tanzania, Ghana, and Ethiopia are the first to fall for the deception, with Mozambique, Cote d’Ivoire, Burkina Faso and other African nations lining up for the “Grow Africa Partnership,” under Obama’s “Global Agricultural Development” plan.

But African civil society wants no part of this latest Monsanto aligned ‘public private partnership.’ Whatever will the progressives do now that their flawless hero has teamed up with their most hated nemesis to exploit an entire continent like they did to India not that long ago?

With a commitment of $3 billion, Obama plans to ‘partner up’ with mega-multinationals like Monsanto, Diageo, Dupont, Cargill, Vodafone, Walmart, Pepsico, Prudential, Syngenta International, and Swiss Re because, as one USAID representative says ‘There are things that only companies can do, like building silos for storage and developing seeds and fertilizers.’

Of course, that’s an outrageous lie. Private citizens have been building their own silos for centuries. But it’s true that only the biowreck engineers will foist patented seeds and toxic chemicals on Africa.

Bono says that there has to be a ‘public private partnership’ in order to get this done and that they are going to be using the ideas of the African people and farmers. Really? This is what the African farmers say to that…

‘We request that: – governments, FAO, the G8, the World Bank and the GAFSP reconsider their promotion of Public/Private Partnerships which, as they are now conceived, are not suitable instruments to support the family farms which are the very basis of African food security and sovereignty.’ ~African Civil Society Organizations

I wonder if that could be any clearer. They don’t WANT the public private partnerships involved in this process…. It’s not enough that huge mega-corporations are bleeding the nations of Africa dry by sucking the valuable mineral resources out of their hills. No. As Bono says about the development in Africa:

‘They’re future consumers for the United States. The president is talking business. This is good. It’s a whole new development paradigm today. The old donor/recipient relationship… it’s over.’” ~Bono

“The history of corporate agriculture and its ‘Green Revolution’ is a perfect example of the unfulfilled promises, and therefore proven lies, of corporatism. What was the Green Revolution? With a huge one-off injection of fossil fuels, and building upon ten thousand years of agronomy, corporate agriculture temporarily increased yields within the monoculture framework.”

But, in the Green Revolution, writes Volatility:

The soil is stripped of all nutrition and zombified by ever-increasing applications of synthetic fertilizer. Monoculture is ever more dependent on the increasing application of ever more toxic herbicides and pesticides. Deployment of GMOs escalates these vulnerabilities. Factory farms can exist only with ever increasing use of antibiotics. All these systems are extremely tenuous, vulnerable, not robust, not resilient. They’re all guaranteed to collapse. Hermetic monoculture, and industrial agriculture as such, is one big hothouse flower which requires perfect conditions to survive….

[T]he Green Revolution was a scam to use cheap fossil fuels to increase monocrop yield, drive tens of millions off the land, and use the stolen land and food to render food temporarily artificially cheap for Western consumerism.

Like with Monsanto’s Bt cotton deployed in India, at first yields improved and farmers profited. Now, however, according to a leaked Advisory from the Minister of Agriculture obtained by the Hindustan Times last month:

Cotton farmers are in a deep crisis since shifting to Bt cotton…. In fact cost of cotton cultivation has jumped…due to rising costs of pesticides. Total Bt cotton production in the last five years has reduced.[5]

The Advisory definitively links farmer suicides to debt-enslavement enabled by the synthetic food model spawned by Monsanto, Dupont and other ecocidal corporations: “The spate of farmer suicides in 2011-12 has been particularly severe among Bt cotton farmers.”

That’s not all the harm wrought by the petrochemical synthetic ag industry, as this 2012 superweed map by the University of Wisconsin shows: 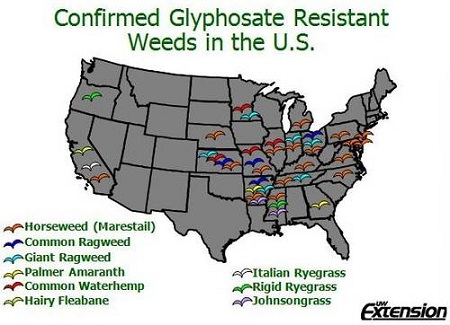 Over half of US states are now plagued by agrochemically-induced superweeds.[6] An industry sponsored study[7] of pesticide use predicts that nearly a billion pounds of these toxic chemicals will be poured on US soils in 2016.

But if that doesn’t deter African farmers, these petrochemicals have also been linked to human birth defects. Where “Roundup Ready soy is being cultivated on a massive scale,” reports Dr. Mercola, “widespread reports exist of immediate illness defects from massive glyphosate spraying operations.”[10]

Huber’s warning to the USDA to halt GM crop approvals, and specifically, genetically modified alfalfa, was not only ignored, but two months ago, Ag Secretary Tom Vilsack hastened the approval process for genetically engineered crops.

“The new rules will cut the time needed to approve biotech crops in half,” reports Dr. Mercola, “from an average of three years, to about 13 months for new versions of already existing crop technologies, and about 16 months for brand new technologies.”[15]

Obama’s Global Agricultural Development plan conspires with multinational corporations to foist these ecological and human health costs onto the public while siphoning the profits. As Creighton says, “Socialized costs, privatized profits. All in the name doing good and saving the people of Africa.”

Let’s hope these “public/private partnerships” are met with firm resistance by African farmers, as supported by this Declaration from a group of African civil society organizations. [16] The last thing Planet Earth and all its organisms need is more toxic industrial chemicals. 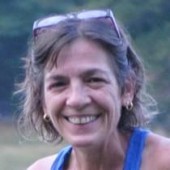 Rady Ananda is the creator of Food Freedom News. Her work has appeared in several online and print publications, including four books. She holds a B.S. in Natural Resources from The Ohio State University’s School of Agriculture.