Syria: The Road to War Continues 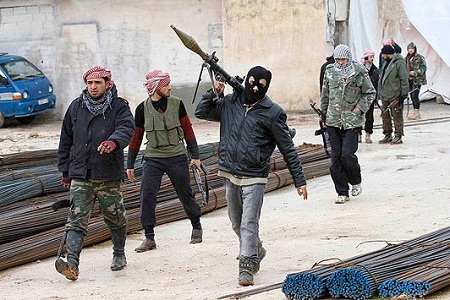 It has been revealed in recent days that the US and Turkey are in fact aiding the Syrian rebels and that the push for intervention is growing. It is important to realize the affects of this not only in Syria, but also for that of Iran and Russia, two of the most prominent and vocal backers of the Assad regime.

The Washington Post stated recently that the Syrian rebels “have begun receiving significantly more and better weapons in recent weeks, an effort paid for by Persian Gulf nations and coordinated in part by the United States, according to opposition activists and U.S. and foreign officials” (emphasis added).[1] It was also recently noted by The Telegraph that Turkey is arming the Syrian rebels. Michael Weiss wrote (emphasis added):

Rebel sources in Hatay told me last night that not only is Turkey supplying light arms to select battalion commanders, it is also training Syrians in Istanbul. Men from the unit I was embedded with were vetted and called up by Turkish intelligence in the last few days and large consignments of AK-47s are being delivered by the Turkish military to the Syrian-Turkish border. No one knows where the guns came from originally, but no one much cares.[2]

There is also help from the Muslim Brotherhood in Egypt which has “opened its own supply channel to the rebels, using resources from wealthy private individuals and money from gulf states.”

This influx of weapons is having a positive effect on the fighting as the Post noted that a clash that occurred in May 14th near the city of Rastan, the rebels overran a Syrian army outpost, killing a total of 23 Syrian troops according to the Syrian Observatory of Human Rights. Yet, it could potentially boost the Assad regime as now the Syrian government’s claims [3] that the violence is being caused by outside interference are verifiable.

It is quite important to factor in the role of the Russian government, one of the staunchest supporters of the Assad regime. Russia has been one of the few countries involved in Syria that seems to be legitimately interested in peace. The New York Times reported in February that two senior Russian officials, Foreign Minister Sergei Lavrov and Mikhail Fradkov, the director of Foreign Intelligence, had gone to Damascus to discuss “dialogue with the opposition, offering a referendum on a new constitution, and the Arab League resuming its ‘stabilizing’ mission.”[4] But they too, have their own interests namely military and commercial. Militarily, the Kremlin is concerned with ensuring that they are able to maintain their naval facilities at the port of Tartus, the only naval access Russia has into the Mediterranean, whereas commercially, Russia has made a considerable amount of money by selling arms to the Assad regime such as $500 million in weapons contracts.[5] Thus, if the Assad regime falls, the Russians will have to deal with a serious economic loss and have to confront the fact that they may be ejected from the Mediterranean, leaving them not only with a loss of power projection, but also being left out of the massive amount of oil and gas found there [6] and the economic and geopolitical power that comes with controlling such natural resources.

Iran, another major backer of the Assad regime, must also be kept in mind. It has been noted that Iran is aiding Assad financially by sending them money which is “funneled in through banks in Lebanon” and is assisting in other ways “includ[ing] small arms and assistance in helping the Syrian government use computer monitoring to root out opposition using social media and other Internet tools.”[7] Iran is aiding Syria due to the fact that Syria is Iran’s only ally in the greater Middle East region. If Syria falls, Iran will be completely isolated and that, when coupled with the push to go to war in both the US and Israel, may very well result in an attack or invasion of Iran.

The increase in violence plays into the hands of the West, especially the United States. Weiss wrote that “Turkey wouldn’t take such a course of action without express American consent or encouragement” and that Senator Joseph Lieberman wouldn’t “indicate that the administration was inching toward a military response to the humanitarian crisis […] unless he was fairly sure it was indeed doing so.” Thus, the violence is being fomented by the US and its allies in an order to make way for ‘humanitarian’ intervention which will only result in regime change. This may be coming closer than we think as CNN reported that (emphasis added):

While troops from 19 countries, including the United States, have converged in Jordan for the Eager Lion military exercise, U.S. and Jordanian elite forces are doing additional training to prepare for potential fallout should Syria’s government collapse.

U.S. Army Green Berets are training Jordanian special forces in a number of so called “worst-case scenarios” including Syria’s chemical and biological weapons falling out of the control of government forces, U.S. sources tell CNN. [8]

One must question as to why the US and Jordanian military would be preparing to go into Syria if it doesn’t seem as if the current regime is going to go under anytime soon. It may be because the US and its allies are currently in the process of creating a situation as to where they will be able to send boots on the ground to secure Syria’s chemical and biological weapons as well as have soldiers there to train and aid the Syrian rebels.

The road to war continues.

2: Michael Weiss, “Syrian rebels say Turkey is arming and training them,” The Telegraph, May 22, 2012 (http://blogs.telegraph.co.uk/news/michaelweiss/100159613/syrian-rebels-say-turkey-is-arming-and-training-them/)