Hana Shalabi’s Hunger Strike Has Ended, But Not Her Punishment 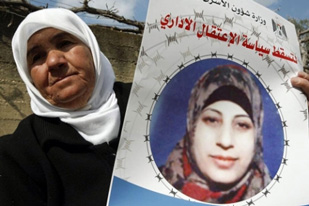 As with Khader Adnan, Israel supposedly compromised with Hana Shalabi on the 43rd day of her hunger strike in protest against administrative detention and her abysmal treatment. But Israel’s concept of ‘compromise’ if considered becomes indistinguishable from the imposition of a further ‘vindictive punishment.’  How else to interpret Israel’s unlawful order to coercively exile (not technically deportation because she is being sent to a location within occupied Palestine) Hana Shalabi for three years to the Gaza Strip, far from her home village of Burqin in the northern part of the West Bank, and more significantly, far from her grief-struck family? Her older sister Zahra was quoted a few days ago as saying “I don’t want to immortalize her, I just want her to live.” We can join her in being relieved that Hana Shalabi did not join the Palestinian honor roll of martyrs, yet to transfer someone who is in critical medical condition to a slightly more open prison than what is experienced as an Israeli detainee, which is how Gaza has been described during its years of isolation and blockade. To call this release ‘freedom’ is to make a mockery of the word, even to call it ‘release’ is misleading. 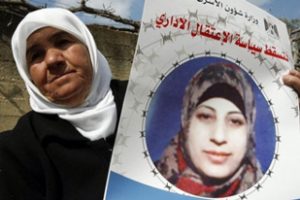 Hana Shalabi is now being compared to Winnie Mandela, who was also exiled to the remote town of Branford in South Africa, forbidden to leave, as a punishment for her nonviolent and militant resistance to the apartheid regime that had imprisoned her then husband, Nelson Mandela. When I had the opportunity to meet and spend time with her in 1968, a couple of years prior to her exile, she was a wonderfully radiant and magnetic personality with a deep political commitment to justice and emancipation from racism, yet a joyful presence who despite living under apartheid, was life-affirming and inspiring. When she returned from exile, she was radicalized, embittered, joined in some violent oppositional tactics, seemingly exhibiting the alienating impact of the punitive effort by the South African government to diminish and marginalize her. This part of Winnie Mandela’s post-exile story should not be forgotten, nor should it ignored that she was not exiled when confronting the sort of life-threatening situation that Hana Shalabi faces as she seeks to recover from this long hunger strike. Also, at least, Winnie Mandela’s youngest daughter, Zinzi, was allowed to accompany her, which was at least made an exception to the total separation from loved ones that has been decreed for Hana Shalabi, who in her current condition cannot even be considered a ‘political’ threat, much less a ‘security’ threat. Israel has compounded the crime of administrative detention with this shamefully gratuitous act of vindictiveness.

Article 49(1) of the Fourth Geneva Convention reads as follows: “Individual or mass forcible transfers, as well as deportations of protected persons from occupied territory to the territory of the Occupying Power or to that of any other country, occupied or not, are prohibited, regardless of their motive.” The intent here is clear, even though the language leave room for lawyers’ quibbles: is the Gaza Strip another country? Israel itself claims that its 2005 disengagement from Gaza relieves it of responsibility. In any event, Israel’s order of banishment will be doubly enforced, neither allowing Hana Shalabi to leave Gaza nor to enter the West Bank where her family lives. As well, given mobility restrictions, her family will not be able to visit her in Gaza. Finally, it should be appreciated that this is a form of ‘collective punishment’ as it also adds to the pain and grief of Hana Shalabi’s family, who will be denied even the opportunity to provide help and love that are obviously needed during what will be at best a long and difficult recovery period. In this sense, the spirit and letter of Article 27 of Geneva IV has also been violated in her arrest, detention, and now in this release: “Protected persons are entitled, in all circumstances, to respect for their persons, their honor, their family rights, their religious conviction and practices, and their manners and customs. They shall at all times be humanely treated, and shall be protected especially against all acts of violence or threats thereof and against insults and public curiosity.” Denying Hana Shalabi’s any visitation rights while confided to an Israeli prison hospital prior to the time her order of ‘deportation’ is implemented, as well as denying the Physicians for Human Rights-Israel or Addameer the opportunity to examine and talk with her underscores the stone coldness of the Israeli prison administration.

It is up to the Palestinian solidarity movement to not let this experience of Palestinian hunger strikes be in vain. At best, it might be later seen as one of the earlier expressions of a Palestinian Spring. At the very least, it should become a key moment in an intensifying campaign against the practice of administrative detention in Occupied Palestine, as well as against abusive arrest procedures and general prison conditions that are habitually relied upon by Israeli military authorities.

Finally, this ambiguous punitive release of Hana Shalabi was apparently agreed upon not only on the 43rd day of her hunger strike, but on the eve of the 36th commemoration of Land Day by Palestinian activists within Israel and in Occupied Palestine. It is important for all of us to recall that it was on this day in 1976 that Israel killed six Palestinian citizens of Israel who were protesting, in violation of a curfew then in effect, Israel’s expropriation of their land. The protests on Land Day 2012, especially near the Qalandiya Checkpoint have been met with tear gas, rubber bullets, and water cannon, apparently with some Palestinian injuries. Two Palestinian activists, Sam Bahour and Jafar Farah, living in the West Bank summarized the situation with these words:  “After the Arab revolutions, there’s awareness of the importance of popular participation. This has rattled the Arab regimes, and now it’s frightening the Israeli government.”

It does appear that these hunger strikes, augmented by sympathetic and symbolic strikes within Israeli jails, in Palestine, and around the world, as well as vibrant protests on Land Day, and a worldwide BDS movement are all signs of a Palestinian reawakening that will gather political leverage as its momentum builds. This is my hope for the year ahead.