The Warped Morality of a Warmonger: Why Alan Dershowitz is Wrong on Israel’s ‘Rights’ 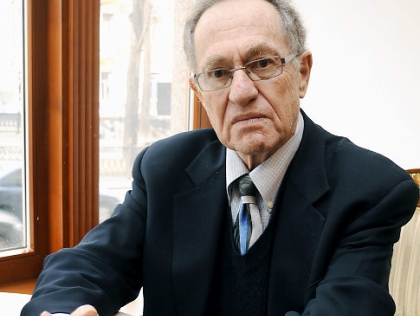 Renowned torture enthusiast and perennial Israel apologist Alan Dershowitz was in Tel Aviv this month attending an annual business conference sponsored by Globes and, as usual, took the opportunity to equivocate for Israeli espionage, defend war criminals, and warmonger about Iran. 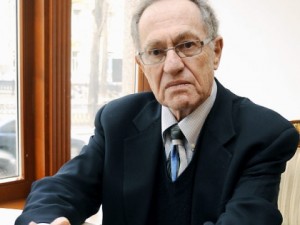 During a speech he delivered on Sunday December 11, Dershowitz opined, “Israel has the right morally and legally to strike Iran just as it did on [the Osirak nuclear facility] in Iraq in 1981.”

This is not a new line for the famous attorney who has worked tirelessly to acquit both aspiring and successful murderers and war criminals and defend billionaires who commit – and millionaires who cover-up – child rape. In April 2010, Dershowitz wrote, “I am asserting, in unqualified terms, that Israel has an absolute right — legally, morally, politically — to take such an action if it deems it necessary to protect its citizens from a threatened nuclear attack.” Even as far back as 2005, he told The Jerusalem Post, “Legally and morally both Israel and the United States would have the right to launch preemptive strikes against Iran’s nuclear program. Recall that leading Iranian mullahs have indicated that Iran would use its nuclear capacity to kill three million Jews. I also believe that targeted assassinations of criminals who are illegally building weapons of mass destruction, can, under certain circumstances, be justified morally. I think the legal case would be much harder to make.”

Like everything else The Dersh says, his statements are clearly out of step with the basic tenets of international law and, unsurprisingly, ignore both historical facts and current reality in order to draw his despicable and dubious conclusions. To understand Dershowitz’s warped concepts of morality, one can simply read his justifications for the murder of civilians, as long as they’re Arabs and/or Muslims.

First of all, the premise of Dershowitz’s appalling argument regarding an Israeli attack is the assumption that Iran is, in fact, hellbent on building nuclear weapons and threatening Israel with genocidal annihilation. Of course, neither claim is true. Both the IAEA and the United States government (after years of covert operations and aerial surveillance) continue to agree that Iran does not have an active nuclear weapons program. In early 2011, Director of National Intelligence James Clapper told both houses of Congress, “We continue to assess Iran is keeping open the option to develop nuclear weapons in part by developing various nuclear capabilities that better position it to produce such weapons, should it choose to do so. We do not know, however, if Iran will eventually decide to build nuclear weapons.” Dershowitz’s insistence that the summary execution of Iranian scientists can be “justified morally” demonstrates the depths of his depravity.

Furthermore, so-called “preemptive” military attacks are illegal and explicitly forbidden by Chapter I, Article 2.4 of the United Nations Charter. The UN Charter also makes clear that it recognizes the “inherent right of individual or collective self-defence if an armed attack occurs against a Member of the United Nations.” (Chapter VII, Article 51) Note that the Charter specifies that an aggressive, military response is allowed only “if an armed attack occurs…,” which undoubtedly rules out “preemptive,” “precautionary,” or “preventative” military action of one State against another. Dershowitz conveniently ignores this clear fact.

Beyond that, using the example of Israel’s June 7, 1981 airstrike on Osirak to argue for the legality of a similar attack on Iran’s nuclear facilities is not only disingenuous at best, it is deliberately deceiving and completely wrong. The Iraqi nuclear program before 1981 was peaceful and subject to intensive safeguards and monitoring. The Osirak reactor was, as Harvard physics professor Richard Wilson has explained, “explicitly designed by the French engineer Yves Girard to be unsuitable for making bombs. That was obvious to me on my 1982 visit.”

What Dershowitz omits from his ridiculous suggestion is that the Israeli attack, code named Operation Opera, took the lives of ten Iraqi soldiers and one French civilian researcher and was widely lambasted by the International Atomic Energy Agency (IAEA) and the international community, including the United States.

Writing in The Guardian in 2002, Jonathan Steele reminded readers that “[t]he world was outraged by Israel’s raid” and recalled some reactions:

“Armed attack in such circumstances cannot be justified. It represents a grave breach of international law,” Margaret Thatcher thundered. Jeane Kirkpatrick, the US ambassador to the UN and as stern a lecturer as Britain’s then prime minister, described it as “shocking” and compared it to the Soviet invasion of Afghanistan. American newspapers were as fulsome. “Israel’s sneak attack… was an act of inexcusable and short-sighted aggression,” said the New York Times. The Los Angeles Times called it “state-sponsored terrorism”.

Within two days of the attack on Osirak, the Reagan administration suspended the shipment of F-16 fighter jets to Israel because of its contention that Israel had “violated its commitment to use the planes only in self-defense.”

Ambassador Kirkpatrick, addressing a June 19, 1981 meeting of the United Nations Security Council, stated the Reagan administration’s official views on the attack by condemning it as an “act of violence” that “gravely jeopardizes the peace and security” in the Middle East, “undermines the stability and well-being of the area,” and “threatens global peace.” Despite noting the “strength of United States ties and commitment to Israel” and insisting that the U.S. government “would approve no decision that harmed Israel’s basic interests, was unfairly punitive or created new obstacles to a just and lasting peace,” Kirkpatrick also told the Council,

Nonetheless, we believe the means Israel chose to quiet its fears about the purposes of Iraq’s nuclear program have hurt, and not helped, the peace and security of the area. In my Government’s view, diplomatic means available to Israel had not been exhausted and the Israeli action has damaged the regional confidence that is essential for the peace process to go forward. All of us with an interest in peace, freedom and national independence have a high stake in that process. Israel’s stake is highest of all.

That very day, the Security Council unanimously adopted a resolution expressing that the body was “[d]eeply concerned about the danger to international peace and security created by the premeditated Israeli air attack on Iraqi nuclear installations.”

The resolution (S/RES/487) also “[s]trongly condemns the military attack by Israel in clear violation of the Charter of the United Nations and the norms of international conduct,” “[c]alls upon Israel to refrain in the future from any such acts or threats thereof,” warns that the attack undermined both the IAEA and NPT, calls on Israel to “urgently to place its nuclear facilities under IAEA safeguards,” and demands Israel provide Iraq with “appropriate redress for the destruction it has suffered, responsibility for which has been acknowledged by Israel.”

Later that year, after the Reagan White House had caved to Israeli pressure and resumed warplane deliveries, the UN General Assembly passed a similarly critical resolution (36/27) on November 13, 1981 that “strongly condemn[ed] Israel for its premeditated and unprecedented act of aggression in violation of the Charter of the United Nations and the norms of international conduct, which constitutes a new and dangerous escalation of the threat to international peace and security.”

The resolution also reaffirmed Iraq’s “inalienable sovereign right” to “develop technological and nuclear programmes for peaceful purposes” and stated that, not only was Iraq a party to the Nuclear Non-Proliferation Treaty, but had also “satisfactorily applied” the IAEA safeguards required of it. Conversely, it noted “with concern” that “Israel has refused to adhere to the Treaty on the Non-Proliferation of Nuclear Weapons, and, in spite of repeated calls, including that of the Security Council, to place its nuclear facilities under International Atomic Energy Agency safeguards.”

In addition to condemning “the misuse by Israel, in committing its acts of aggression against Arab countries, of aircraft and weapons supplied by the United States of America,” the resolution reiterated “its call to all States to cease forthwith any provision to Israel of arms and related material of all types which enable it to commit acts of aggression against other States” and requested “the Security Council to investigate Israel’s nuclear activities and the collaboration of other States and parties in those activities” and “institute effective enforcement action to prevent Israel from further endangering international peace and security through its acts of aggression and continued policies of expansion, occupation and annexation.”

Furthermore, the General Assembly demanded that “Israel, in view of its international responsibility for its act of aggression, pay prompt and adequate compensation for the material damage and loss of life suffered” due to the illegal and lethal attack.

Only the United States and Israel voted against the resolution.

In August 2002, Mary Ellen O’Connell, law professor at the Moritz College of Law and Associate of the Mershon Center for International Security and Public Policy at Ohio State University, wrote an extensive analysis entitled “The Myth of Preemptive Self-Defense” for the American Society of International Law (ASIL) Task Force on Terrorism wherein she explicitly addresses the very misconception Dershowitz is attempting to put forward.