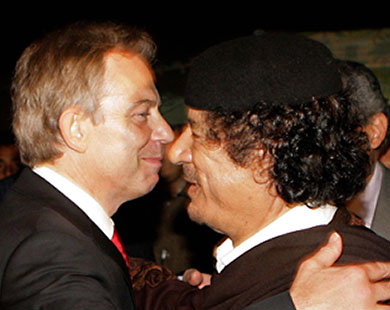 David Cameron’s statement regarding the killing of Moammar al-Gaddafi  will go down as another piece of brash hypocrisy, which would be breathtaking if it was not so expected from the British premier. He mentioned that he was “proud of the role that Britain has played” in the uprising – meaning, of course, the support given by NATO once it was clear that the Libyan people had risen up against the man en masse.

However, he neglected to mention some of the other roles that Britain previously played with the Gaddafi regime which have undoubtedly had an effect on the events:

• Many of the weapons used by Libyan dictator’s regime were in fact purchased from Britain. According to the AP: “Britain sold Libya about $55 million worth of military and paramilitary equipment in the year ending Sept. 30, 2010, according to Foreign Office statistics. Among the items: sniper rifles, bulletproof vehicles, crowd control ammunition, and tear gas”

• The notorious Khamis brigade troops (Libya’s elite forces under the direct command of one of the Gaddafi son’s) contracted an £85 million command and control system from General Dynamics UK – one of the deals cut with the personal backing of the then British PM Tony Blair.

• Not only did the British arm the forces of the Gaddafi regime, they also trained them. The Khamis brigade troops were also trained by the SAS as well as being armed by British companies.

Cameron also stated that today was “a day to remember all of Colonel Gaddafi’s victims”. However, he neglected to mention those victims who were kidnapped and rendered to the Gaddafi regime by the British intelligence service such as Sami al Saadi, who is now suing the British government for not only being complicit in his rendition and torture, but actually actively organizing it as highlighted by documents unearthed in Libya.

The American’s are also not free of association with the Libyan regime – and were also actively pursuing both commercial and security interests with the country.

Documents have shown that the CIA kidnapped the current head of the Tripoli military council Abdel Hakim Belhaj, torturing him before rendering him and his family to the Libyan regime back in 2004.

While the CIA had obviously begun their relationship with the regime earlier, by 2008, former president George W. Bush sent his top diplomat Condoleezza Rice to Libya for talks with the regime, and in the same year, Texas-based Exxon Mobil signed an exploration agreement with the Libyan National Oil Corp. to explore for hydrocarbons off the Libyan coast. According to the same AP report:

The US also approved the sale of military items to Libya in recent years, giving private arms firms licenses to sell everything from explosives and incendiary agents to aircraft parts and targeting equipment.

The Bush administration approved the sale of $3 million of materials to Libya in 2006 and $5.3 million in 2007. In 2008, Libya was allowed to import $46 million in armaments from the US. The approved goods included nearly 400 shipments of explosive and incendiary materials, 25,000 aircraft parts, 56,000 military electronics components, and nearly 1,000 items of optical targeting and other guidance equipment.

The Obama administration has not released figures showing the depth of their relationship with the Gaddafi regime, but it is not likely to be any less repulsive than that of the previous American government.

In summary, Britain and America armed the Libyan regime, as well as actively co-operated with it in the torture of opposition figures. This was done alongside supporting it politically through opening up diplomatic channels and meetings, and working hard to open the regime up to Western commercial interests.

Taking the above into account, it is widely held that the long-time presence of the collection of various Middle Eastern despots was in no small part due to Western support, a fact that automatically negates any altruism on the part of the same governments when extolling the virtues of their military intervention in this case. Without the weapons, training, and diplomatic legitimacy and support given to regimes from Libya to Tunisia to Saudi Arabia and Bahrain, it is doubtful that they would have survived up until today given that popular dissatisfaction against them had been brewing for decades.

As an example, the relative silence and inaction of the West vis-à-vis the bloody and violent actions of their Bahraini ally (a benevolent monarch or oppressive dictator depending on which side is supported), as well as that of their partner in the war on terror, Yemeni President Ali Abdullah Saleh, whose forces continue to kill protestors on an almost daily basis (while the Americans continue to bomb victims, including American teenagers, with predator drones), exposes any claims that the West’s intervention in Libya was about anything altruistic.

Opposite to their lofty but empty rhetoric, the West has no real interest in supporting popular uprisings against regimes historically aligned with them, a message that has been sent to the populations of the region through the support of both Ben Ali and Mubarak until their final moments while working hard to “manage” any process of change which would maintain their interests, and their continued support of the Khalifa family, Abdullah Saleh, and the remaining despots in the Arabian peninsula.

This is along with their refusal to abandon their “reform” candidate in Syria Bashar al-Assad for months after he began massacring the people there. Going further afield to places like Pakistan, it is the United States that is currently killing civilians with alarming regularity through the use of their unmanned aerial drones, with the silent collaboration of the Zardari regime.

While many celebrate the killing of a despot hated by the people of the region, it is unlikely that the region will forget the history of supporting, and continuing support, for the dictators of the Middle East. While for the remaining illegitimate regimes in the area, the lesson of Saddam Hussein, Hosni Mubarak, Ben Ali, and now Moammar al-Gaddafi is that friends can be quickly forsaken by their Western patrons when the writing is on the wall, the best lesson that the common man may draw from these events is simply to never trust a Western politician and that the only way to alter the status quo is through radical change.