In America, The Rule Of Law Is Vacated 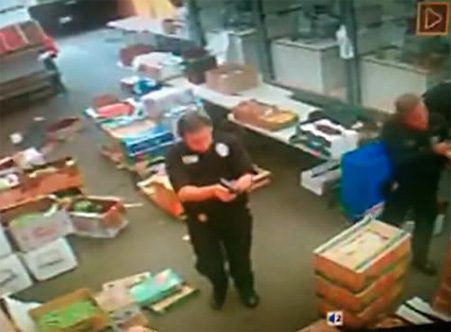 With bank fraudsters, torturers, and war criminals running free, the US Department of Justice (sic) has nothing better to do than to harass the famous Tennessee guitar manufacturer, Gibson,  arrest organic food producers in California, and send 12 abusive FBI agents armed with assault rifles to bust down yet another wrong door of yet another innocent family, leaving parents, children, and grandmother traumatized.

What law did Gibson Guitar Corp break that caused federal agents to disrupt Gibson’s plants in Nashville and Memphis, seize guitars, cause layoffs, and cost the company $3 million from disrupted operations?

No US law was broken. The feds claim that Gibson broke a law that is on the books in India.

India has not complained about Gibson or asked for the aid of the US government in enforcing its laws against Gibson.  Instead, the feds have taken it upon themselves to both interpret and to enforce on US citizens the laws of India. The feds claim that Gibson’s use of wood from India in its guitars is illegal, because the wood was not finished by Indian workers.

This must not be India’s interpretation of the law, as India allowed the unfinished wood to be exported.  Perhaps the feds are trying to force more layoffs of US workers and their replacement by H-1B foreign workers.  Gibson can solve its problem by firing its Tennessee work force and hiring Indian citizens on H-1B work visas.

In Venice, California, feds spent a year dressed up as hippies purchasing raw goat milk and yogurt from Rawesome Foods and then, decked out in hemp anklets and reeking of patchouli, raided with guns drawn—always with guns drawn—the organic food shop. The owner’s crime is that he supplied the normal everyday foods that I grew up on to customers who requested them.  For this heinous act, James C. Stewart faces a 13 count indictment and is held on $123,000 bail.

How did raw milk become a “health threat?”  Far more Americans have died from e-coli in fast food hamburgers and from salmonella in mass produced eggs and chicken.  Like many of my generation, I was raised on raw milk.  Mathis Dairy delivered it to the homes in Atlanta.  Even decades later, a person could purchase Mathis Dairy’s raw milk in Atlanta’s grocery stores. How did supplying an ordinary staple become a crime?

The FBI agents who broke down Gary Adams door in Bellevue, Pennsylvania, claim they were looking for a woman. Why does it take 12 heavily armed FBI agents to apprehend a woman?  Are FBI agents that effete? If the feds can never get the address right, how do we know they have the name and gender right?

I can remember when it only took one policeman to deliver a warrant and to arrest a person, and without gun drawn and without breaking down the door, tasering or shooting the object of arrest.  It turns out that the FBI agents who broke into the Adams home not only were at the wrong address, but also didn’t even have a search warrant had they been at the correct address.

The practice of sending heavily armed teams into American homes has resulted in many senseless murders of US citizens.  The practice must be halted and SWAT teams disbanded.  SWAT teams have murdered far more innocents than they have dangerous criminals.  Hostage situations are rare, and they are best handled without violence.

Jose Guerena, a US Marine who served two tours in Bush’s Iraq War was murdered in his own home in front of his wife and two small children by a crazed SWAT team, again in the wrong place, who shot him 60 times. When his wife told him that there were men sneaking around the house, he picked up his rifle and walked to the kitchen to see what was going on and was gunned down.  The hysterical SWAT team fired 71 shots at him without cause.  Brave, tough, macho cops out defending the public and murdering war heroes.

I have seen studies that show that police actually commit more acts of violence against the public than do criminals, which raises an interesting question:  Are police a greater threat to the public than are criminals? On Yahoo, I just searched “police brutality” and up came 4,840,000 results.

Meanwhile, the real master criminals, such as Dick Cheney, who, if tried for his actions at Nuremberg, would most definitely have been executed as a war criminal, run free.

Cheney is all over TV hawking his memoirs. On August 29, interviewed by Jamie Gangel on NBC’s Dateline, Cheney again proudly admitted that he authorized torture, secret prisons, and illegal wiretapping.  These are crimes under US and international laws.

Cheney claims breaking laws against torture is “the right thing to do” if “we had a high-value detainee and that was the only way we can get him to talk.”

Three questions immediately come to mind that no member of the presstitute media ever asks. The first is: Why does Cheney think the office of Vice President, President, or Attorney General has the power to “authorize” breaking a law?  Our vaunted “rule of law” disappears if federal officials can authorize breaking laws.

The second is: What high-value detainees is Cheney talking about? Donald Rumsfeld declared the Guantanamo detainees to be “the most dangerous, best-trained, vicious killers on the face of the earth.”  But the vast majority had to be released when it turned out, after years of their lives were spent in a torture prison, that the vast majority of the detainees were hapless innocents who were sold to the stupid Americans by war lords as “terrorists” for bounties. To save face, the US government has held on to a few detainees, but hasn’t enough confidence in their alleged guilt to put them on trial in a court of law.

The third is: Why does Cheney think that he knows better than the accumulated documented evidence that torture doesn’t produce truthful or useful information? If the person under torture is actually a terrorist, he knows that his tormentors don’t know the answers that they are looking for and so he or she can tell the torturers whatever serves the tortured victim’s purposes.  If the person under torture is innocent, he has no idea what the answers are and seeks to discover what his torturer wants to hear so that he can tell him.

As Glenn Greenwald makes clear, Dick Cheney, who presided “over policies that left hundreds of thousands of innocent people dead from wars of aggression, constructed a worldwide torture regime, and spied on Americans without the warrants required by law” is now being feted and enriched thanks to “the protective shield of immunity bestowed upon him by the current administration.”

Meanwhile Gibson Guitar faces prosecution because of the feds’ off-the-wall interpretation of a law in India, and the owner of Rawesome has a 13-count indictment for supplying customers with a food staple that was a part of the normal diet from colonial times until recently.

In America we have the rule of law—only the law is not applied to banksters and members of the executive branch but, as Greenwald says, is only applied to “ordinary citizens and other nations’ (unfriendly) rulers.”

A country this utterly corrupt is certainly no “light unto the world.”