Whither Gaddafi, Tripoli and Libya? 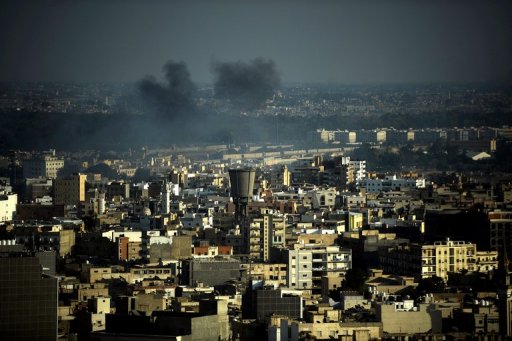 The Battle for Tripoli may not be over

[Editor’s note: The following report was written on August 22, but there was a delay in getting it out as Mr. Lamb was without internet access for two days.]

TRIPOLI, August 22 — The large gold framed portrait of Colonel Muammar Gaddafi that adorned the wall behind the reception desk of my hotel since it opened many years ago has vanished.  Also gone are the 72 green flags that flew on the white poles at the hotel entrance.   It’s not polite to inquire of the skeleton staff about who removed these items because the act of removal could become very serious offenses depending on the final outcome here.  But, my friend Ismail, manning the front desk, just grinned at me when I commented on the hotels fine new mirror that hangs in the leader’s former spot. 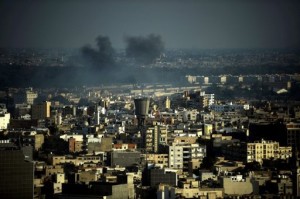 Looking over the skyline of Tripoli at 7:30 a.m. on August 22 from the 26th floor of the Corinthia Hotel, it seems that it’s just about over for the Gaddafi regime.

But maybe not just yet.

All night one heard in central Tripoli mainly celebratory gunfire from areas like the nearby newly renamed “Martyrs Square” (formerly “Green Square”) but so many questions are on most people minds this morning.  Are the Gaddafi forces opening a trap for the rebel forces allowing them to come in quickly and easily and then when they are gathered in public celebrations and seek rest, counter attack?  The government has used this tactic over the past five months. Some observers and Libyans other are asking if Gaddafi perhaps suckered NATO since it cannot effectively usher its rebel forces around the blocks and alleys of Tripoli as it has blasted paths for them to arrive to the Capitol.  The next hours may reveal which.

The claim of the NTC representative this morning that the rebels control 95% of Tripoli seems farfetched.  This is a very spread out city and its clear rebel forces are not deployed everywhere.

A column of 22 camouflaged painted military vehicles full of government fighters slowly passed by our hotel at 8:10 this morning and turned right into the seaside compound, which includes the Bab al Bahar Hotel (“gate to the sea”), and on its edge, the unoccupied JW Marriott, from which witnesses said the sniper who shot me in my right leg yesterday morning was perched. My doctor gave me the bullet as a souvenir, and I will be fine, although the damned thing hurts. An arriving hotel worker just reported seeing government forces assembling in Tripoli’s neighborhoods over the past several hours.

On the other side of my hotel I can see rebel pickups filled with fighters and new tricolor Libyan flags driving very slowly towards Green (Martyr’s) Square.  I am thinking what would happen in they make a wrong turn.

I have the feeling that Gaddafi’s forces may be preparing a counterattack which would belie the initial impressions we had that NATO’s rebels are not meeting serious resistance and that Gaddafi’s soldiers have largely given up and gone home.

Reports of Saif and Mohammad Gaddafi’s capture support the idea that the government here wildly exaggerated its solid support, and that the public largely believed them.  Already among the few staff and some kids who come early the jump the hotel fence and use the swimming pool, and their trademark chants of “Allah, Mohammad, Muammar, Libya wa bass” have ended their chants and now support for ousting “the leader” is widespread. Most hotel staff at my hotel appear crestfallen.

The outpouring of support for Gaddafi’s departure by the same crowds who seemed to adore him at Green Square the past five months I have been monitoring them is surprising, but perhaps reveal why all powerful despots are often more form than substance and can collapse quickly under certain conditions.

The questions being asked here this morning by student friends include: What happened to the resistance to NATO and its supported rebels? Where are the 65,000 professional soldiers waiting to repel “NATO’s rebels” from entering Tripoli, mentioned just last night by Government spokesman, Musa Ibrahim? Was there ever a real Libyan army of thousands ready to defend Tripoli? What will the transition be like? Will there be tribal conflicts for power? Will Libya have to pay for all the infrastructure damage? Will NATO countries, given the widespread hostility to NATO killing  so many civilians, be granted oil contracts? Will the US get another military base (Wheelus was closed by Gaddafi in June 1970)? Will the new government recognize Israel, as NATO  is said to be  demanding? Will the National Transition Council fulfill its pledges for a just, quick transition, with early elections, and on and on?

Yesterday morning, as I embarked on a bike tour of Tripoli, there were signs that something incongruous was happening. Security guards, normally about 20 outside the hotel were nowhere to be seen. Also, no staff came to work.  Ismail and the I.T. guy slept at the hotel—and the British lady “Miss Lorraine”, who is in charge of hotel hospitality, lives at the hotel and was understandably and visibly upset.

As I left the hotel close to 7:30 a.m. by bicycle yesterday morning, I was surprised to see one woman standing alone on the street in front of the hotel. I more surprised when she lit up with a broad smile as she chimed “Hello, Mr. Lamb!”  She is Marianne, who works with Lorraine somewhere in the bowels of this claimed “7 Star Hotel”. I had spoken with her on the phone but we had never met personally.  When I asked her why she was standing in the empty street, she replied, “I need to find a ride to the port!”  That seemed odd, given what is happening here, so I asked her why.  “My two week vacation starts today and I need to get a boat to Malta”.  I was shocked, “Sweetheart, please, for sure there is no boat to Malta now, and it’s dangerous for you to go to the Port.”  “But, my boyfriend is waiting for me in Malta” she wailed. “Okay, but if you find a ride, call my room and I will pay half and come with you to the Port”. Marianne agreed. I never saw her again.

The UN delegation left yesterday after their five day “fact finding mission.”  Not sure what facts they found because they mainly stayed in the hotel waiting and waiting, like most other foreigners here do, for a promised appointment with a government official or someone. Their leader, a stellar Palestinian lady from Nazarath in Occupied Palestine, convinced NATO to let some foreigners make use of empty UN plane seats so this hotel was essentially emptied of guests.

At press time, no sign of Colonel Gaddafi, and angst is rising among the public over the odd calm that has spread over Tripoli.