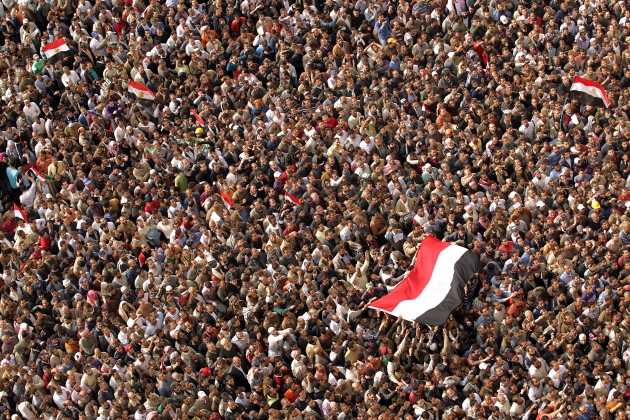 Even though Mubarak’s hold on power grew more tenuous, the last few days proved he has no intention of going down without a fight. His desperate attempts at survival are faced by the determination of the demonstrators. The dilemma is in the current deadlock. On one hand, the regime is tottering, but continues its efforts to contain the revolution. On the other hand, the demonstrators stand their ground. The military is so far neutral, and the international powers continue to adopt a cautious approach. As the denouement remains unwritten, a diagnosis of the current deadlock is imperative to comprehend the positions of all parties. 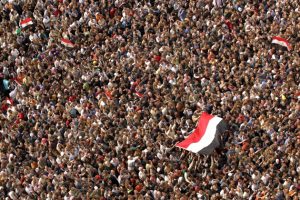 Mubarak, in a frantic bid to cling to power, launched a counter revolution. He and those interested in preserving the old status quo took lots of resourceful steps to buy time until the revolutionary euphoria fades away.

First, offering scapegoats to appease public opinion and to avoid any blame directed at Mubarak, by alleging that corrupt businessmen and ruling party notables tarnished the image of the regime.

Second, arguing that the demands of the demonstrators are met by implementing cosmetic changes through the dismissal of the cabinet and the appointment of a vice president.

Third, claiming that there are constitutional time limitations that impede any instantaneous drastic changes. This comes along with a pledge to an orderly transition, but emphasizing that it will take time to be implemented according to the constitutional provisions.

Fourth, eliciting the desire for security and a longing for a return to normalcy by portraying the breakdown of law and order. Deliberately stoking chaos to create widespread anxiety and to drive a wedge between those who demand change and others who fear the unknown. As gangs mushroomed across the country, Mubarak presents himself as indispensable to a safer future. This is to taunt people with the choice between Mubarak’s stability, as opposed to a chaotic alternative.

Fifth, emphasizing that the situation adversely affects the economy, as reflected in the scarcity of food supply, the shortage of fuel, a reduction in tourism revenues, bank runs, capital flight, loss of foreign direct investment, downgrading of sovereign debt, a stock exchange collapse, and a devaluation of the currency.

Sixth, using the Islamist scarecrow by claiming that the Muslim Brotherhood is riding the revolutionary wave.

Seventh, plucking a sentimental chord with a recollection of Mubarak’s military legacy in defending the soil of Egypt besides his desire to die on it.

Eighth, arguing that a humiliating departure of Mubarak is not befitting any president of Egypt, and that an honorable and dignified discharge implies he continues till the end of his presidential term.

Ninth, unleashing violence through the intimidation of and the attacks on protestors by thugs.

Tenth, discrediting the demonstrators by claiming there are sinister groups that hover in the shadows and agitators with hidden agendas. This, in addition to blaming the protests on a plot by foreign elements.

Eleventh, stoking nationalist emotions against foreign interference by asserting that any change appears as a submission to international pressures.

Finally, seeking to divide the opposition by coopting political party leaders for a dialogue with the regime.

On the other hand, protestors, who represent the yearning for freedom, are determined to stand their ground. The tactics implemented by the regime have not succeeded in aborting their dream due to a plenty of factors.

First, Egyptians have no confidence in the regime. There is no credibility in Mubarak pledges, and his promises are derided as an empty gesture. Mubarak’s cosmetic changes are deemed a gambit to absorb discontent and a ploy to contain the revolutionary tide.

Second, there is a fear to lose the momentum of this historical chance for a democratic change. This is solidified by the feeling that their tenacity lead to few concessions. Thus, their continued determination will lead to other capitulations for which activists have clamored for years to no avail.

Third, fear of retaliation if Mubarak rides out the storm, especially as they read subtle threats in official statements.

Fourth, the demonstrators have no unified front to convey their legitimate demands, besides the fact that the opposition is fractured and weak. Accordingly, any dialogue with the regime will not be from the position of power unless they exert pressure through street protests.

Fifth, there is fury and frustration at the accusations, adding insult to injury, that the demonstrators are influenced by external forces.

Sixth, the crude application of force and state-sanctioned violence imply that the behavior of regime has not changed. The demonstrators observed a regime-orchestrated conspiracy: the police forces that disappeared in inconspicuous circumstances, thugs attacking protestors, the release of prison inmates, looting and vandalism by gangs, and the suspicious role of the secret police.

Seventh, unwillingness to pursue a dialogue that implies a recognition of the current regime. Finally, any dialogue is considered a drag of time that the regime might take advantage of.

The Army remains neutral, and the thoughts of the military high command remain impenetrable. The army, which is the protector of legitimacy, is trapped between the people who created a new revolutionary legitimacy but do not have a formal command on the army yet, and a commanding authority that lost its legitimacy. The neutrality of the army can be attributed to various factors.

First, the military wants to protect the image of the armed forces as the security valve in Egypt. The Egyptian military is highly regarded due to its embodiment of the national glory at several historical junctures: resisting the British occupation in 1881, the revolution in 1952, and the war with Israel in 1973.

Second, the army fears an interference that might lead to a blood path in a pitched battle against the people.

Third, Mubarak has been assiduous in courting military circles and is close to the top brass. He has deftly utilized the American military aid to underpin the army. Therefore, the odds the military prodding Mubarak into exile is small.

Finally, the military does not want to take sides to lose its prominent position as a referee, which would allow it to participate in shaping any future arrangements.

International powers attentively follow the events, but are not clear whether to fret about it or to embrace it. The United States and the West so far have adopted a cautious approach, and are dodging taking sides to avoid alienating whoever may emerge in power. On one hand, they do not want to be seen as complicit in supporting a dictatorial regime, even though democracy promotion was only upheld rhetorically due to the exigencies of pursuing strategic interests. On the other hand, the United States and the West do not want to explicitly support the calls for Mubarak’s ouster as the stakes are high.

First, there is the fear that Egypt would turn into an anti-Western bastion. Egypt is pivotal and serves as an anchor for other friendly and allied regimes in the region. Any radical change in this formula will not allow the West to pursue its interests unencumbered.

Second, the fear of an Egypt that is hostile to Israel. Egypt is considered the linchpin to peace in the Middle East, and its peace treaty remains the main bulwark against a war between Israel and the Arab world. Egypt is also the key interlocutor in the peace process. Mubarak inherited and scrupulously upheld the peace treaty. The new policy makers, however, might consider rescinding the peace accord.

Third, the fear of a domino effect in the volatile region. As the Middle East is metamorphosing, the spill over effect could shake the entire region.

Fourth, to bend to the new winds could open up the floodgates, as it could be perceived an open invitation for others in the region.

Fifth, the fear that other regimes in the region will be disenchanted if the United States and the West fail to back their long time ally.

Sixth, the fear that Islamists, with anti-Western sentiments, could lead Egypt to take positions unfavorable to Western interests.

Seventh, the fear that continued instability, and any possible escalation, could disrupt oil supply causing a shortage and a price shock.

Eighth, the fear that the new president’s priority will be to cement his position and build popular support, by sounding an initial anti-Western tone in his public rhetoric in an effort to prove his nationalist bona fides.

Finally, the fear that anti-Western regional players are celebrating at the travails of their fiercest antagonist, and that their position could be bolstered by a more supportive Egypt.

Mubarak may limp along for a little while longer, but no one is betting he will be there for the long haul. His legitimacy is utterly depleted. The fig leaf covering his regime has finally fallen, for the ugly naked truth to be revealed. Egypt will be out of the current deadlock when all parties concerned come to the realization that Mubarak is becoming a burden on everyone. A burden on his country and his people who gave him a sufficient chance, a burden on the military as he puts them in a predicament with the people, and a burden on the international community that will realize that the current deadlock, caused by an obstinate president unwilling to step down, enhances the uncertainty in Egypt and the entire region.