Tonight we are all Tunisians 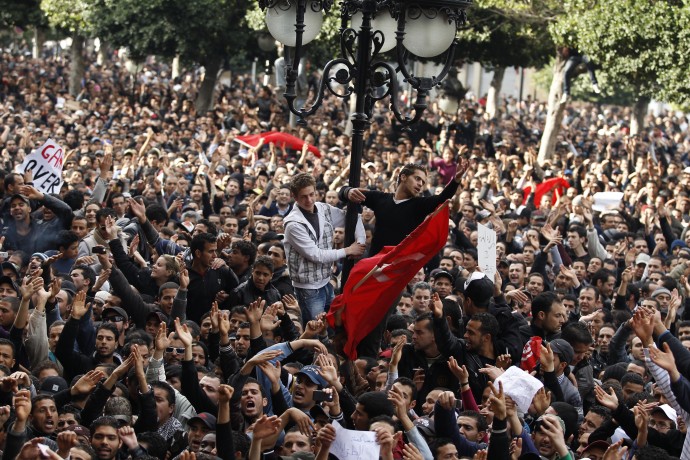 Armed with nothing more than a revolutionary heart and hopes of a better future they gathered and protested as government forces aimed their weapons and fired live rounds in to the crowds.

But the ammunition and the underlying threats of arrest and torture meant absolutely nothing to the masses – for they had simply lost their fear. 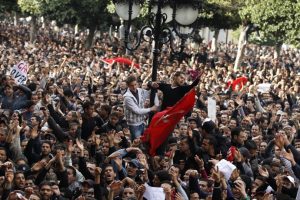 It was the final testament to the brutality of a dictator who has had the support of European leaders and various presidents of the United States.

And that the Tunisian President Zine El-Abedine Ben Ali fled from his country like a rat up a drainpipe after 23 brutal years spoke volumes about the character of the man himself.

If he had one ounce of the courage his own people displayed, he too would have stayed but most of these tyrants are gutless with the moral fiber of a dung beetle.

The demise of Ben Ali came when police prevented an unemployed 26-year-old graduate from selling fruit without a license. Mohammad Bouazizi turned himself in to a human torch on December 17 and died of the horrific burns in Sidi Bouzid, in central Tunisia.

It was the final straw, a defining moment which ignited rallies, marches and demonstrations across Tunisia.

And revelations from Wikileaks cables exposing the corrupt and extravagant lifestyle of Ben Ali and his grasping wife fanned the flames of unbridled anger from a people who were also in the grip of poverty.

I knew it was coming. I saw the burning desire for freedom in the eyes of the courageous people of Ghafsa when the Viva Palestina Convoy entered the country in February 2009 on its way to Gaza.

Our convoy witnessed the menacing secret police intimidate the crowds to stop them from gathering to cheer us on.

This vast army of spies, thugs and enforcers even tried to stop us from praying in a local mosque

That they stood their ground to cheer us on prompted me to leave my vehicle and hug all the women who had turned out. We exchanged cards and small gifts and then, to my horror, I discovered 24 hours later that every woman I had embraced in the streets of Gafsa had been taken away and questioned.

Human rights organizations have constantly condemned and exposed the brutality of the Ben Ali regime but that has not led America and European leaders to intervene or put pressure on the regime to stop the brutality.

Sadly, it serves western interests to have a people brutalized and subjugated.

Now Tunisia is minus one dictator but it is still in a state of emergency. The next few days and weeks are going to be crucial for the Tunisian people who deserve freedom and liberty. My God, they’ve paid for it with their own blood and we must always remember their martyrs.

None of the politicians, secret police or other odious government forces will emerge from this period with any honor and quite a few are already cowering in the shadows.

But perhaps the biggest show of cowardice in this whole sorry episode has come from The White House.

And news of the corrupt, mafia-like regime would not have come as a surprise to either of them. We know this thanks to the Wikileaks cables written by US Ambassador Robert Godec who revealed in one memo: “Corruption in the inner circle is growing.”

But, as the injustices and atrocities continued there was not one squeak from the most powerful nation on earth … until America’s dear friend, Ben Ali had scuttled from the country.

The reality is the US Administration likes dealing with tyrants and even encourages despotic behavior. Egypt is one of the biggest testaments to this with its prisons full of political opposition leaders. Hosni Mubarak is Uncle Sam’s enforcer and biggest recipient of aid next to the Zionist State.

Pakistan’s treatment of its own people is little better. Remember when US Ambassador Anne Patterson in Islamabad wrote in one Wikileaks cable about the human rights abuses carried out by the Pakistan military? Patterson then went on to advise Washington to avoid comment on these incidents.

But now the US has made a comment on the situation in Tunisia … but only when Ben Ali was 30,000 feet in the air did White House spokesman Mike Hammer issue a statement which read: “We condemn the ongoing violence against civilians in Tunisia, and call on the Tunisian authorities to fulfill the important commitments … including respect for basic human rights and a process of much-needed political reform.”

Unbelievable. Too little, too late, Mr President. Actually that statement could have been uttered any time during the last US presidencies since Ronald Reagan.

But as I say, America couldn’t give a stuff about the human rights of the people of the Maghreb, Pakistan, Egypt and Palestine to name but a few.

When US condemnation finally came through the tyrant had fled leaving behind more than 60 civilian martyrs and countless more injured.

Tomorrow I will go to the Tunisian Embassy in London as I have done previously and stand shoulder to shoulder with my Tunisian brothers and sisters and their supporters. We will remember the dead, we will pay tribute to the brave and courageous many who are still in the process of seizing back their country and we will pray that no tyrant will sleep easy in his bed from this moment on.

Tonight we are all Tunisians.