Walkout on Ahmadinejad at UN: The Craven Whores Doth Protest Too Much 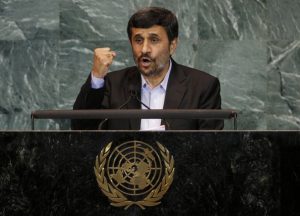 While it is all very easy for the news media, sundry interest groups, and government functionaries throughout the world to dismiss Dr Ahmadinejad as a Mad Mullah beyond the ken of rational debate, perhaps that is because Iran’s president poses questions that are too near the mark to allow a sensible hearing.

As if it weren’t enough being the leader of a large Islamic nation that does not kowtow to the USA and to Israel, Dr Ahmadinejad put himself beyond redemption for eternity by suggesting that “holocaust revisionism” should be subjected to the same standards of scholarly scrutiny as any other historical matter,[1] and like the Left-wing Jewish academic Prof. Norman G Finkelstein, suggested that the holocaust was being exploited for political and economic motives.[2] Being Jewish, Left-wing and the son of parents who had survived both the Warsaw Ghetto and Nazi concentration camps,[3] didn’t save Finkelstein from the Zionist smear-brigade, so Dr Ahmadinejad is not about to be cut any slack.

When Dr Ahmadinejad reached the UN podium on September 24, it is certain that Israel, the USA and sundry lackeys to both states, waited with baited breath to see what the president would do this time to try and expose their corrupt system before what remains of states that have any sense of national sovereignty and dignity. The reaction of the delegates from the USA, Australia, New Zealand, all 27 delegates from the EU states, Canada, and Costa Rica was to walk out en mass — the response of those who have nothing thoughtful or honest to offer. In New Zealand’s case, our state relies of moral posturing at world forums to compensate for national impotence.

Dr Ahmadinejad suggested before the General Assembly in regard to 9/11 that scenarios might include:

1. That a “powerful and complex terrorist group” which is “advocated by American statesmen,” penetrated US intelligence and defences.

2. “That some segments within the US Government orchestrated the attack to reverse the declining American economy and its grip on the Middle East in order to save the Zionist regime. The majority of the American people as well as other nations and politicians agree with this view.”

3. That the attack was the work of “a terrorist group but the American government supported and took advantage of the situation.”[4]

According to media reports, “Ahmadinejad said the US used the September 11 attacks as a pretext to invade Afghanistan and Iraq, killing hundreds of thousands of people.”[5]

While it might be questionable for Dr Ahmadinejad to have stated that “the majority” of Americans support the view that 9/11 was a Zionist jack up somewhere along the line, as well as the view of other nations and politicians, the view – of course dismissed by orthodox academia, media and government functionaries as “conspiracy theory” – is certainly a one that is at least very widespread, including among many professionals in the relevant sentences for investigating such matters. There are also many oddities about events before and after 9/11, such as the large number of Israelis who were acting suspiciously and were rounded up and deported from the USA, albeit quietly, and the antics of five Israeli “moving company” employees[6] dancing atop a warehouse roof in New Jersey at the time of the Twin Towers collapse, arrested and questioned for several months by the FBI, at least two of whom were found to be Mossad operatives.[7]

These matters will not concern us here however, as the internet has abundant details.

What we will consider here is:

1. Have such methods, as suggested by Dr Ahmadinejad been used before to justify wars?

2. Was there a long-range plan to use conflict scenarios as justification for the invasion of states in order to secure “regime change” in the interests of Israel?

The 9/11 attacks have been called “False Flag operations.” Media and others bleat about this “conspiracy theory” as though the concept has just been conceived by paranoid mentalities. The False Flag operation has been frequently used to instigate conflicts, and many such incidences are recognized by orthodox academe and media. Therefore, what makes 9/11 so inconceivable as a False Flag operation?

Examples of False Flag operations accepted as such by orthodox academe include:

1. The Manchurian Incident, 1931, when Japanese officers contrived a pretext for invading Manchuria by blowing up part of the Japanese owned railway.[8]

2. Gleiwitz, Poland, 1939. German soldiers dressed in Polish uniforms attacked and occupied a German radio station near the Polish border. Several German prisoners dressed as Polish soldiers were left dead at the scene. The incident was used to justify the invasion of Poland. Other incidences under “Operation Himmler” occurred simultaneously along the border.[9]

3. Mainila, Russia, 1939. The Soviets shelled this Russian town near the Finnish border, claiming that it had been bombed by the Finns, using this as a pretext for invasion.[10]

4. Cairo and Alexandria, 1954, The Lavon Affair. Israeli agents bombed American and British properties in Egypt for the purpose of blaming the Egyptians. The nine Egyptian Jews involved were honoured in 2005 by the Israeli Government, despite the operation supposedly being of a “rogue” nature.[11]

5. USA-Cuba, 1962. Operation Northwoods, conceived by the Joint Chiefs of Staff and signed off by Gen. Lyman Lemnitzer. The plan included the sinking of a US ship near Cuba, airplane hijackings, and bombings throughout the USA, which would be made to appear to be of Cuban origin. The plan was scotched by Kennedy, but was later exposed by James Bamford via the Freedom of Information Act. The purpose of this plan is instructive in the context of 9/11:

The desired result from the execution of this plan would be to place the United States in the apparent position of suffering defensible grievances from a rash and irresponsible government of Cuba and to develop an international image of a Cuban threat to peace in the Western Hemisphere.[12]

While not a “False Flag” operation, Pearl Harbor is worth mentioning in this context. It has long been contended by many well placed individuals, including ex-military commanders on Hawaii, that the Roosevelt Administration was forewarned of the Japanese attack due to having broken the Japanese naval codes, but failed to warn the Pearl Harbor command of the attack so that maximum propaganda could be obtained. Col. Curtis Dall, President Roosevelt’s son-in-law, was on the inside of what went on in Washington at that time, as well as interviewing in 1967 retired Admiral Husband A Kimmel, Commanding Officer at Pearl Harbor.[13] In a scenario familiar to those who consider 9/11 to be a False Flag operation, Dall cites the November 25, 1941 entry from US Secretary of War Henry L Stimson’s diary:

The question was how we should maneuver them [the Japanese] into firing the first shot, without allowing too much damage to ourselves. It was a difficult proposition.[14]

The Stimson comment follows the strategy recommended by Lt. Commander Arthur H McCollum, director of the Office of Naval Intelligence, Fear East Asia section, who had on October 7, 1940, over a year prior to Pearl Harbor, drafted a memorandum, suggesting methods of goading Japan into attacking the USA to justify America’s entry into the war, and move public opinion which was overwhelmingly isolationist. McCollum outlined eight points of policy that might provoke Japan into an action against the USA, the problem as McCollum stated it being that, “It is not believed that in the present state of political opinion the United States government is capable of declaring war against Japan without more ado…”[15] McCollum concludes by unequivocally stating: “If by these means Japan could be led to commit an overt act of war, so much the better. At all events we must be fully prepared to accept the threat of war.”[16]