On Refusing Apology for the Nuking of Civilians 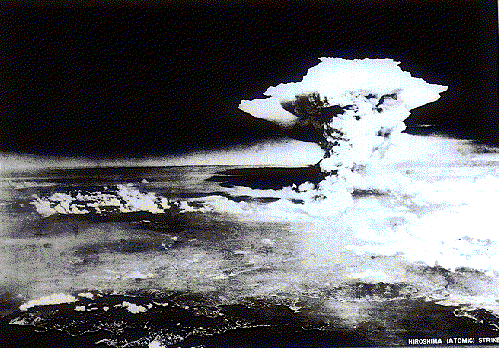 Japan on Friday marked the 65th anniversary of the nuclear bomb attack on Hiroshima. U.S. Ambassador John V. Roos attended the annual ceremony that marks the event. It was the first time a U.S. official had done so. The New York Times explains the reason:

Until Friday, American officials had always skipped the annual ceremony, fearing their presence would renew the debate over whether the United States should apologize for the World War II bombings, which together killed more than 200,000 people in explosions so intense that many victims were vaporized, leaving only ghostly shadows on walls, while others died in agony from burns and radiation sickness.

Such a debate would probably be politically divisive in the United States and could even drive a wedge between America and Japan, one of Washington’s closest allies. American officials have long defended the bombings as having shortened the war and avoided an invasion, which they say would have cost untold thousands of American and Japanese lives. But many Japanese see the attacks as the epitome of the indiscriminate slaughter of modern warfare, and a principal reason for Japan’s postwar pacifism.

So, U.S. officials never attended the ceremony before yesterday because the U.S. refuses to apologize for a massacre of innocent civilians 65 years ago. 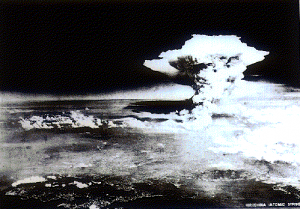 That in itself is instructive enough, but what’s even more enlightening is the logic employed by which the conclusion is arrived at that no apology is necessary. Since an invasion of Japan would have cost thousands of lives of soldiers, and since the bombing ended the war and thus helped avoid an invasion, therefore the bombing was legitimate.

The first problem with this logic is the premise that an invasion would have been necessary. But let’s just assume, for argument’s sake, that it would have been.

We thus arrive at the second problem with this logic, which is in the assumption that it’s okay to kill civilians in order to prevent the loss of life of soldiers. This is an interesting standard for a nation to apply.

So, you see, the nuking of Hiroshima (and Nagasaki) was not “terrorism”, because it was done by a nation, and not by subnational actors. For nations, the bar is raised higher. Nations don’t commit mere terrorism; they commit the more serious offenses of aggression and war crimes.

So was this massacre of hundreds of thousands of civilians a war crime? By contemporary standards, yes, it was. Under the Fourth Geneva Convention, such attacks against civilian populations are absolutely prohibited, and are absolutely a war crime.

Of course, the Fourth Geneva Convention didn’t come about until after World War II.  But does it follow that the U.S. should therefore not apologize for actions, were they committed today, it would legally recognize as a war crime?

Moreover, international treaties relating to the laws of war and protection of civilians did not begin with the Geneva Conventions. The pre-WWII Hague Conventions prohibited the use of arms that cause “superfluous injury” and attacks against undefended cities. “Aerial bombardment for the purpose of terrorizing the civilian population, of destroying or damaging private property not of military character, or of injuring non-combatants is prohibited” and “is legitimate only when exclusively directed at” military targets (emphasis added). The “indiscriminate bombardment of the civilian population” is absolutely prohibited.

The U.S. government seeks to avoid a “debate” about the matter. But what is there to debate? There is nothing under international law, either now or then, that would allow for the justification of the killing of civilians in order to ostensibly prevent a hypothetical loss of lives in the future. The deliberate targeting of civilian populations is and was absolutely and unconditionally prohibited.

The Times adds that “While some Japanese still consider the bombings a war crime, mainstream opinion appears to be more complex, largely out of recognition of Japan’s militaristic past.” So we are supposed to believe that most Japanese do not consider the bombing a crime, and those who do are a marginal group who possess simplistic views.

The Times also adds that “Historians … say the moral ambiguity is one reason for an almost total lack of hostility toward Americans in Hiroshima”. Moral “ambiguity”? In what way is the matter ambiguous? Again, international law, reflecting moral principles universally accepted in the day, is totally unambiguous about the matter.

Moreover, isn’t it more likely that Japanese are not hostile to Americans not because they don’t regard the killing of hundreds of thousands of civilians with nuclear weapons to be a crime, but rather because they’re willing, in all their gracious mercy, to forgive Americans for what their country did? Why is the explanation of “moral ambiguity” fit to print, but the reason of forgiveness  not worthy of a mention?

That the U.S. media, and U.S. officials, and many Americans in general, are willing to manufacture “moral ambiguity” where none exists, in order to attempt to justify the unjustifiable, even to this day, 65 years later, is a powerful statement about the moral degeneration of the U.S.

Why should the U.S. not apologize? This is a question for which there is only one answer, which is that the U.S., in all its hypocrisy, reserves for itself the “right” to commit war atrocities it would condemn if other nations were to do the same.

The time is long past due for Americans and their elected officials to reassess the U.S. relationship with Japan, to acknowledge the truth of the matter, to express regret and remorse for the unjustifiable massacre of civilians, and to move forward.

It’s not enough that U.S. officials merely attend the annual ceremony remembering the bombing of Hiroshima and the victims of that crime. As Kazumi Mizumoto, a professor at Hiroshima City University, told the Times, “Japan and the United States are not so far apart. Maybe they should offer a joint apology of all the terrible things that happened in that war.”

It’s been 65 years. An apology from the U.S., whether or not it is reciprocated by Japan, is long overdue.