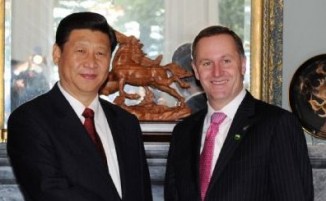 [1] “China and New Zealand, I. Bilateral Political Relationship and major exchange of visits, A. Chinese Visits to New Zealand,” Ministry of Foreign Affairs of the People’s Republic of China, <http://www.mfa.gov.cn/eng/wjb/zzjg/bmdyzs/gjlb/3412/t17070.htm>

[11] National Endowment for Democracy, the world revolutionary apparatus of the US Establishment.

[19] John Key seemed to emerge from nowhere to become Prime Minister. He worked for Merrill Lynch in Singapore, London and Sydney. In 1999 he was “invited to join the Foreign Exchange Committee of the Federal Reserve Bank of NY and on two occasions undertook management studies at Harvard University in Boston.”  He became a National Party MP in 2002. Key’s Parliamentary profile at: http://www.beehive.govt.nz/minister/john+key?bio=1 (accessed on July 5, 2010).

[26] Foreign affairs and trade are under the responsibility of the same Ministry.