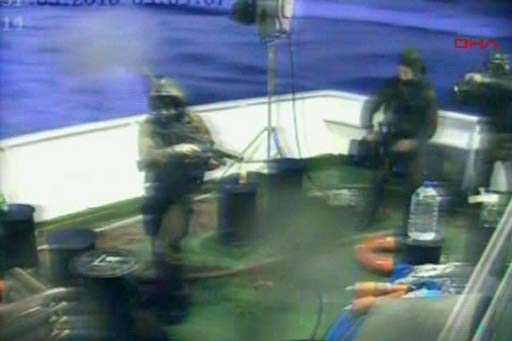 As I write at 5pm on Monday, May 31, all day has passed since the early morning reports of the Israeli commando attack on the unarmed ships carrying humanitarian aid to Gaza, and there has been no response from President Obama except to say that he needed to learn “all the facts about this morning’s tragic events” and that Israeli prime minister Netanyahu had canceled his plans to meet with him at the White House.

Thus has Obama made America complicit once again in Israel’s barbaric war crimes.

Just as the US Congress voted to deep-six Judge Goldstone’s report on Israel’s war crimes committed in Israel’s January 2009 invasion of Gaza, Obama has deep-sixed Israel’s latest act of barbarism by pretending that he doesn’t know what has happened. 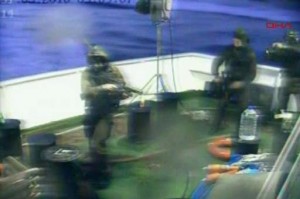 No one in the world will believe that Israel attacked ships in international waters carrying Israeli citizens, a Nobel Laureate, elected politicians, and noted humanitarians bringing medicines and building materials to Palestinians in Gaza, who have been living in the rubble of their homes without repairs or medicines since January 2009, without first clearing the crime with its American protector. Without America’s protection, Israel, a totally artificial state, could not exist.

No one in the world will believe that America’s spy apparatus did not detect the movement of the Israeli attack force toward the aid ships in international waters in an act of piracy, killing 20, wounding 50, and kidnapping the rest.

Obama’s 12-hour silence in the face of extreme barbarity is his signal to the controlled corporate media to remain on the sidelines until Israeli propaganda sets the story.

The Israeli story, preposterous as always, is that the humanitarians on one of the ships took two pistols from Israeli commandos, highly trained troops armed with automatic weapons, and fired on the attack force. The Israeli government claims that the commandos’ response (70 casualties at last reporting) was justified self-defense.  Israel was innocent. Israel did not do anything except drop commandos aboard from helicopters in order to intercept an arms shipment to Gazans being brought in by ships manned by terrorists.

Many Christian evangelicals, brainwashed by their pastors that it is God’s will for Americans to protect Israel, will believe the Israeli story, especially when it is unlikely they will ever hear any other. Conservative Americans, especially on Memorial Day when they are celebrating feats of American arms, will admire Israel for its toughness.

Here in north Georgia, where I am at the moment, I have heard several say, admiringly,  “Them, Israelis, they don’t put up with nuthin’.”

Conservative Americans want the US to be like Israel. They do not understand why the US doesn’t stop pissing around after nine years and just go ahead and defeat the Taliban in Afghanistan.  They don’t understand why the US didn’t defeat whoever was opposing American forces in Iraq. Conservatives are incensed that America had to “win” the war by buying off the Iraqis and putting them on the US payroll.

Israel murders people and then blames its victims. This appeals to American conservatives, who want the US to do the same.

It is likely that Americans will accept Israeli propagandist Mark Regev’s story that Israelis were met by deadly fire when they tried to intercept an arms shipment to Palestinian terrorists from IHH, a radical Turkish Islamist organization hiding under the cover of humanitarian aid. This explanation is crafted to allow Americans to sink back into their stupor.

Americans will never hear from the US media that Turkey’s prime minister Erdogan declared that the aid ships were carefully inspected before departure from Turkey and that there were no terrorists or arms aboard:

“I want to say to the world, to the heads of state and the governments, that these boats that left from Turkey and other countries were checked in a strict way under the framework of the rules of international navigation and were only loaded with humanitarian aid.”

Turkey is a US ally, a member of NATO. Turkey’s cooperation is important to American’s plan for world hegemony. Turkey now realizes that the Israeli state is comprised of total evil. Erdogan must wonder about the morality of Israel’s American protector. According to a report in antiwar.com, the Turkish government declared that “future aid ships will be dispatched with a military escort so as to prevent future Israeli attacks.”

Will the CIA assassinate Erdogan or pay the Turkish military to overthrow him?

Murat Mercan, head of Turkey’s foreign relations committee, said that Israel’s claim that there were terrorists aboard the aid ships was Israel’s way of covering up its crime. Mercan declared:

“Any allegation that the members of this ship is attached to al-Qaeda is a big lie because there are Israeli civilians, Israeli authorities, Israeli parliamentarians on board the ship.”

The criminal Israeli state does not deny its act of piracy. Israeli military spokeswoman Avital Leibovich confirmed that the attack took place in international waters: “This happened in waters outside of Israeli territory, but we have the right to defend ourselves.”

Americans, and their Western European puppet states and the puppet state in Canada, will be persuaded by the servile media to buy the story fabricated by Israeli propaganda that the humanitarian aid ships were manned by terrorists bringing weapons to the Palestinians in Gaza, and that the terrorists posing as humanitarians attacked the force of Israeli commandos with two pistols, clubs, and knives.

The ignorant Americans will swallow this story without a hiccup.