Review: Beyond Fundamentalism – Confronting Religious Extremism in the Age of Globalization 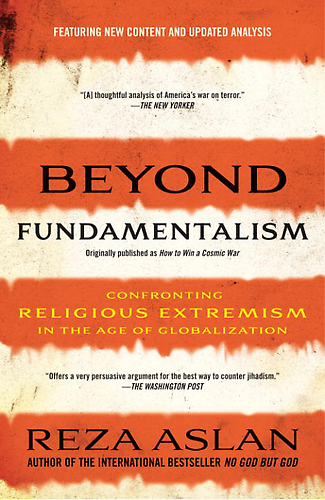 I first encountered Reza Aslan on the Jon Stewart Show and was somewhat perturbed by his interview – unfortunately, I have not been able to retrieve that reference on the Internet, but it did intrigue and led me to purchase his book titled ‘Beyond Fundamentalism’. More than likely, it was his intention, to promote his latest book originally published as “How to Win a Cosmic War.”

At first appearances, the writing seems highly sensationalized, presenting definitions about the differences between holy wars and ‘cosmic’ wars as if there was a substantial difference between the two. Yet, saying that a “cosmic war is a religious war” does not seem to offer much differentiation. That cosmic warriors “are fighting a war of the imagination” seems all too obvious, either from a secular perspective, or from a religious perspective in which the image and reality of god are often described as unknown realities to mere humans. 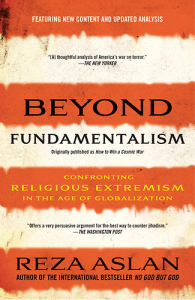 However, as the introduction develops, it becomes more grounded in reality than philosophy, and discusses the 9/11 attacks as being a “declaration of war” for a “war already in progress…raging between the forces of good and evil…. It was an invitation that America’s own cosmic warriors were more than willing to accept.” Aslan accepts the validity of the Muslim grievances, that the “Palestinians really are suffering under Israeli occupation. Arab dictators are in fact propped up by U.S. policies. The Muslim world truly does have reason to feel under attack….” His ultimate statement, one that unfortunately is not reiterated in the rest of the book, is “there is only one way to win a cosmic war: refuse to fight in it.”

The concept of jihad is presented in the first chapter, and its various attributes and definitions concerning lesser and greater jihad leads into a discussion of the development of the “near enemy” and the “far enemy.”

Following that, Aslan very briefly discusses the development of Jewish fundamentalism and the origination of the Zionist movement in nineteenth century Europe where the rise of nationalism coincided with the rise of anti-Semitism; where the Jews represented an “alien culture” that had“yet to sufficiently assimilate into European society.” Aslan does not identify that Zionism also developed in this milieu of proto-nationalism and Christian identification of the Jews as the ‘other’ outcasts from their society.

His brief history is generally accurate and leads to a concluding statement that “There remains today no more potent symbol of injustice in the Muslim imagination than the suffering of Palestinians under Israeli occupation.” He emphasizes, however, that the real grievance for the jihadists is between the forces of good and evil, to be enjoined by “all Muslims, Jews, and Christians – three faith communities with long and deeply ingrained traditions of cosmic warfare.”

Bush’s pronouncement of a “crusade” fit wonderfully with the Arab world’s experiences with colonialism, imperialism, and religion. His response could not have served bin Laden’s intentions better, while at the same time providing the excuse for the neocon members of government to put their intentions into practice. While the overall tone of the development of Jewish zealotry is reasonable, Aslan misses some historical evidence that could provide different perspectives on subsequent events for the Jewish religion. He recognizes the conflict of archaeological evidence to support some of the Jewish mythology. He accepts that the “Jews had been forced out of the Holy Land by Rome,” in spite of the fact that imperial Rome never ethnically cleansed any of its territories and there is no evidence to support such an expulsion. He accepts that “Every Jew…was forced out of the holy city into permanent exile,” a mythology that is not supported by serious historical documentation and research.

Aslan follows this with a concise and accurate description of the Christian fundamentalists in the United States. He recognizes that “Evangelicalism is not so much a religious sect as it is a social movement…[,]a single community under siege” in a world changing beyond their control. This is combined with a “fervent religious nationalism – the conviction that the United States is a Christian nation appointed by God to establish Christian values throughout the rest of the world,” a “blending of martial and cosmic imagery,” that well suited Bush, Cheney, and the other neocons.

Jihadism returns with more discussion of its ideological/theological development as well as the development of the suicide bomber as a holy warrior. At first concerned with the near enemy – apostate governments and citizens of their own countries and regions – the idea was transformed by bin Laden and Zawahiri against the far enemy; in this case, the U.S. and its allies. He concludes that confronting “the social movement that Osama bin Laden and Ayman Zawhiri inspired a decade ago will require more than military might.” He does not quite reiterate his initial comment about refusing to fight the war, but indirectly says it is a “battle that can be won not with bullets and bombs but with words and ideas.”

Unfortunately the latter idea is well pronounced in U.S. publicity about its intentions about winning the hearts and minds of the indigenous population. However, that cannot be done with the ongoing occupation and military surges that fully contradict the ill-considered verbiage.

The focus shifts to Europe with its small yet significant Muslim population, a section of society that is one result of Europe’s colonial past. As immigrants escaping oppression and employed as cheap labor, the Muslim people of Europe are generally well integrated into their respective societies. Aslan is a bit starry eyed about both globalization and the European Union. He never does fully define what his idea of globalization is, orwhat effects it has on society; buthe arrives at the rather surprising statement that, “For the enthusiasts of globalization, the European Union offers a thrilling glimpse into a future of transnational interdependency.” Thrilling, for sure, as the debt crisis surge through the ‘have not’ countries of Europe, threatening to shake once again the global financial markets; and the transnational interdependency relies much more on transnational corporations and their non-democratic rule over the rights of nations.

That weakness in his analysis aside, his observations and analysis of jihadism as represented in Europe are accurate. He examines it as a social movement as much as a religious one (in Islam, as with Christian fundamentalists, there is little difference). The terrorist does not arise from poverty, but from the educated population that has put considerable thought into the injustices – real and perceived – of society, sacrificing themselves not so much from hatred but “to sacrifice oneself for a positive reason such as love, reputation, or glory.”