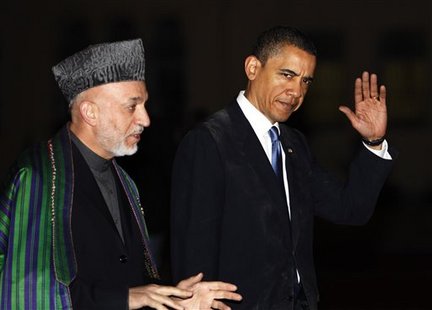 Clad in his usual attire of a colorful, striped robe, Afghan President Hamid Karzai appeared more like an emperor as he began his fourth day in Washington. Accompanying him on a somber visit to the Arlington National Cemetery were US Defense Secretary Robert Gates, Chairman of the Joint Chiefs of Staff Adm. Mike Mullen and top US (and NATO) commander in Afghanistan Stanley A. McChrystal – the very men responsible for the war and occupation of his own country.

The well-choreographed and clearly-rehearsed visit seemed set on giving the impression that the relationship between Karzai and these men was that of an independent, confident leader seeking the support of a benevolent superpower. 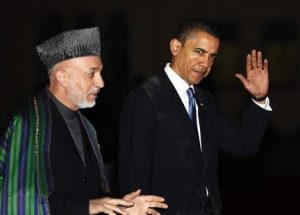 But what were Karzai’s real reasons for visiting Washington?

Typical media analyses have for months misrepresented the apparent chasm between Afghanistan and the US under Obama’s administration. Even if this administration was genuinely discontented with Karzai’s policies, at least until very recently, the resentment had little to do with the reasons offered by media ‘experts’. It was not because Karzai was failing to deliver on governance, end corruption and so on. Let’s face it, the US war in Afghanistan was never morally grounded, and it never could be either. Not unless the militant mindset that governs US foreign policy somehow acquires a complete overhaul.

For now, let’s face up to reality. Bad days are awaiting Afghanistan. True, it is hard to imagine how Afghanistan’s misfortunes could possibly get any worse. But they will, particularly for those living in Kandahar in the south. Seated next to Karazi during his Washington visit, Secretary of State Hillary Clinton promised that her country will “not destroy Kandahar in order to save Kandahar.”

The statement may sound assuring, but it is in fact ominous and very troubling. Clinton was referring to the Bush administration’s policy in both Iraq and Afghanistan. In fact, she candidly admitted this by saying, “This is not Fallujah,” referring to the Iraqi city which was almost completely destroyed in 2004 by a massive US Marine assault intended to ‘save’ the city. “Lessons have been learned since Iraq,” stated Clinton.

But if lessons were truly learned, then why the fictitious language, the silly assertion that the real intention is to in fact ‘save’ Kandahar? And what other strategy does the US have in store for Afghanistan, aside from the irritating debate on whether to use unmanned drones or do the killing face to face?

Was Karzai in Washington to provide a cover for what is yet to come in the Taliban’s southern stronghold? It’s not unlikely. Considering past and repeated claims of a growing divide between Kabul and Washington, a bloody attack on Kandahar could in fact be seen as the US acting unilaterally in Afghanistan. Add to this scenario the constant and continued calls made by Karzai himself to engage Taliban. A US escalation without public consent from Karzai himself couldn’t possibly be seen as a part of a joint strategy.

At a presentation at the United States Institute of Peace (USIP), Karazi spoke of an extended US commitment to Afghanistan that would last “beyond the military activity right now … into the future, long after we have retired, and perhaps into our grandsons’ and great-grandsons’ — and great-granddaughters’ — generations.”

“This is something the Afghan people have been seeking for a long, long time,” he said.

Clinton too was concerned about the plight of the ‘people’. She promised to “help the people of Kandahar to recover the entire city to be able to put it to the use and the benefit of the people of Kandahar…We’re not fighting the Afghan people…We’re fighting a small minority of very dedicated, ruthless extremists who unfortunately are able to enlist young men… for a variety of reasons and send them out onto the battlefield.”

And a major assault there will be, for the Taliban’s counter-surge is threatening the US’s counterinsurgency operations.

A quick scan of an article by Marie Colvin in Marjah, Afghanistan, where the Taliban is once more making its presence very clear, highlights the challenges facing the US military throughout the country. Entitled ‘Swift and bloody: the Taliban’s revenge,’ the May 9 article starts with the claim that “rebels have returned.” Throughout, the report was dotted with similar assertions. “Marjah was supposed to be safe…All that progress is threatened by the Taliban ‘surge’…There were always fears that they would re-emerge… The strength of the Taliban’s presence is gradually becoming clearer…The Taliban are growing bolder…”

The term ‘surge’ was once associated with General David Petraeus’s strategy predicated on the deployment of 30,000 new troops in Afghanistan. That it is now being attributed to the Taliban’s own strategy is ironic, to say the least. Once meant to be a ‘success story, now convincing the world that things are working out in Afghanistan might not be so easy after all. “Worries are growing in the Pentagon that if thousands of marines and Afghan security forces cannot entirely defeat the Taliban in Marjah, a town of only 50,000, securing the far larger prize of Kandahar may be an even greater struggle than has been foreseen,” wrote Colvin.

The challenge ahead, although bolstered with all the right (albeit predictable) language is likely to be bloody, just like the rest of this sad Afghanistan episode, which actually began much earlier than 2001.

The US and Karazi (as a supposed representative of the ‘Afghani people’) must come across as united in the face of the extremist minority. Karazi’s visit to the US was the political padding prior to the likely military storm. It was meant to assure the public that the chaos which will follow is in fact part of a counterinsurgency effort; well-planned, calculated, executed and, as always, passionately articulated.