While serving out a hit piece against the global “9/11 Truth” movement, it is in fact the editors of the Washington Post who are demonstrably “fact-averse”.

An editorial in the Washington Post yesterday slammed Japanese member of parliament Yukihisa Fujita because he “seems to think that America’s rendering of the events of Sept. 11, 2001, is a gigantic hoax.” His “ideas” about the terrorist attacks “are too bizarre, half-baked and intellectually bogus to merit serious discussion.”

Fujita, the editorial added, is a member of “the lunatic fringe” who “have spawned a thriving subculture of conspiracy theorists at home and abroad”, and “his views, rooted as they are in profound distrust of the United States, seem to reflect a strain of anti-American thought”. The piece closes by suggesting that the “fact-averse” Fujita should be removed from office. 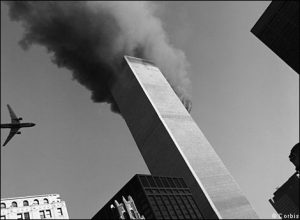 Among Fujita’s “bizarre” views are “that shadowy forces with advance knowledge of the plot played the stock market to profit from it”, “the fantastic idea that eight of the 19 hijackers are alive and well”, and “that controlled demolition rather than fire or debris may be a more likely explanation for at least the collapse of the building at 7 World Trade Center”.

Yet while serving out a hit piece against the global “9/11 Truth” movement, it is in fact the editors of the Washington Post who are demonstrably “fact-averse”.

It happens to be an uncontroversial fact that in the days just prior to the attacks, there was a dramatic increase in trade on put options, and what made this unusual spike even more mysterious was that it was observed  only in relation to companies directly affected by the attacks, including United Airlines, American Airlines, and Morgan Stanely Dean Witter & Co. (which occupied 22 floors of 2 World Trade Center).

That this occurred was in fact mentioned in the 9/11 Commission Report, which reported that the federal investigations into the suspicious trading concluded that it was all “innocuous”. Many of the trades on the airline companies, for instance, were traced to a “single U.S.-based institutional investor with no conceivable ties to al Qaeda”.

In other words, the report acknowledges that the suspicious trades did in fact occur, but dismisses this as evidence of foreknowledge because the investigation didn’t lead to the proper predetermined culprits. This is illustrative of the kind of standard the 9/11 Commission employed throughout its so-called “investigation”.

The “fantastic” idea that the identity of the hijackers named by the FBI is in question is an interesting case. At the time, the Washington Post had also subscribed to this “half-baked” notion. On September 20, 2001, under the headline “Some Hijackers’ Identities Uncertain”, the Post reported, “FBI officials said yesterday that some of the 19 terrorists who carried out last week’s assault on New York and Washington may have stolen the identities of other people, and their real names may remain unknown.”

Among the evidence for this, the Post cited “Saudi government officials” as having determined “that at least two of the terrorists used the names of living, law-abiding Saudi citizens”. The man in the picture of one of the alleged hijackers, the Post reported, was Salem Al-Hazmi, who was actually alive and well, according to Gaafar Allagany, the chief of the Saudi Embassy’s information office in Washington. The real Al-Hazmi’s “passport was stolen by a pickpocket on a trip to Cairo three years” before. Another of the alleged hijackers was Abdulaziz Al-Omari, who, Allagany said, was also alive and “an electrical engineer in Saudi Arabia.”

“The uncertainty”, the Post continued, “highlights how difficult it may be to ever identify some of the hijackers who participated in the deadliest act of violence on American soil. Most of the hijackers’ bodies were obliterated in the fiery crashes.”

The Washington Post was not the only mainstream media outlet to report on the uncertainty over the hijacker’s identities. It was widely reported elsewhere, both in the U.S. and international media.

The U.K.’s Guardian, for instance, reported on September 21 under the headline “False identities mislead FBI” that “The FBI acknowledged yesterday that some of the terrorists involved in the attacks last week were using false identities”, with regard to Al-Hazmi and Al-Omari.

FBI acknowledgment of this was also reported by the BBC the same day under the headline “FBI probes hijackers’ identities”. The BBC also reported on September 22 under the headline “Hijack ‘suspect’ alive in Morocco” that Waleed Al-Shehri, another alleged hijacker, the “same Mr Al-Shahri” whose photo the FBI had released as being among the terrorists, “has turned up in Morocco, proving clearly that he was not a member of the suicide attack.”

On September 23, under the headline “Hijack ‘suspects’ alive and well”, the BBC reported that yet “Another of the men named by the FBI as a hijacker … has turned up alive and well” and that “The identities of four of the 19 suspects … are now in doubt.” FBI Director Robert Mueller also “acknowledged … that the identity of several of the suicide hijackers is in doubt.”

The London Telegraph similarly ran a story on September 23 entitled “Revealed: the men with stolen identities”.

The Washington Post itself ran a follow-up article on September 25 entitled “Some Light Shed On Saudi Suspects”, reporting that “U.S. investigators believe they have positively identified 15 of the 19 hijackers”, but that the identities of the other four were still in question.

On September 27, even while releasing the official list of hijackers along with their photos, the FBI confirmed that uncertainty remained over some of the identities. Mueller acknowledged that the FBI was still “determining whether when these individuals came to the United States these were their real names, or they changed their names for use with false identification in the United States; that false identification being used up to and on the day of September 11th, and that false identification used to purchase the tickets, and thereby being the name on the manifests of the planes that went down.”

Yet, despite these facts, neither the Washington Post nor any other mainstream media outlet has ever offered any follow-up reports explaining whether and how this uncertainty was finally resolved. The FBI has never clarified this matter to the public. The 9/11 Commission didn’t so much as even address the question, even to attempt to clear up the matter.

And so, it remains an uncontroversial fact, as far as the public is concerned, that the identify of at least several of the hijackers remains in question. Why the government has refused to clarify this issue, and why the media now report anyone who doesn’t have a short memory about 9/11 as being part of a “lunatic fringe” are also open questions that warrant some kind of explanation.

Finally, there is the matter of the collapse of the World Trade Center buildings. Many people might be surprised to learn that not only two towers fell on September 11. In fact, a third skyscraper also collapsed that day neatly into its own footprint. It is also an uncontroversial fact that proper investigative procedures for such disasters, particularly in cases where a crime has been committed, were contemptuously ignored in the case of the WTC.

For starters, the evidence from the crime scene in the form of the remains of the three buildings was removed and immediately destroyed. Destruction of evidence is itself a crime, and yet that is what happened. Other standard procedures were also ignored, such as testing for any kinds of accelerants that may have been responsible for the building failures.

The National Institute of Standards and Technology (NIST) has released what is supposed to be the conclusive report on the building collapses. Yet, the explanation it provides, too, is inadequate, to say the least. The computer models NIST offers for the collapse of WTC 7, for instance, look just like one would expect them to, for the kind of collapse NIST says occurred there. You first see one load-bearing column fail, leading to the progressive failure of other columns until the entire structure has eventually crumbled.

The problem is that these models look absolutely nothing like the actual collapse, documented on video. A simple look at any available footage of the collapse is enough to demonstrate that all major load-bearing columns of the building failed nearly simultaneously. You see the penthouse of the building sinking into the core just seconds before the entire structure, all perimeter columns, fail at precisely the same instant, causing the building to collapse straight down  at free-fall acceleration into what should have been the path of greatest resistance according to NIST’s own assessment.

The similarities to videos of building “implosions” under controlled demolition are astonishing. Yet NIST dismisses the possibility that charges could have been used largely on the basis that, if this had been the case, there would have been eyewitness reports of the explosions. The problem with this is that there were in fact a great many eyewitness reports of explosions, both prior to and during the collapse.

NIST also completely ignored the actual leading alternative hypothesis, which was that a substance called thermite (or its U.S. Department of Defense-patented variation, thermate) may have been used to cut the building’s columns, rather than, or in conjunction with, traditional explosive demolitions. Evidence for this hypothesis comes not only in form of empirical observation about the actual nature of the collapse from video footage (including the presence of molten steel), but also in traces of what appears to be thermite in the dust from the collapses.

Independent scientific inquiries into the collapse have led to the discovery of “distinctive red/gray chips in all of the samples” that, when studied, all showed “marked similarities” and were “found to be an unreacted thermitic material”. These findings were included in a report entitled, “Active Thermitic Material Discovered in Dust from the 9/11 World Trade Center Catastrophe” that was published last year in The Open Chemical Physics Journal.

Though this report was widely circulated on the internet and among alternative media sources, the Washington Post never bothered to report these findings published in a peer-reviewed scientific journal.

Whatever theories about the events of September 11, 2001 one may subscribe to, what everyone surely can agree upon is that the facts should matter. The editors of the Washington Post might perhaps begin by acknowledging just a few of the more non-controversial facts, including the fact that suspicious trading did occur prior to 9/11, the fact that the identities of at least some of the hijackers has been cast in doubt and that this has never been clarified to the public, and the fact that the collapses of the three WTC buildings has never been adequately investigated.

Surely, that proper credible investigations into the events of 9/11 should occur — indeed, should have occurred long ago — should also be non-controversial, no matter which conspiracy theory one believes, whether it belongs to “the lunatic fringe” or to the U.S. government.