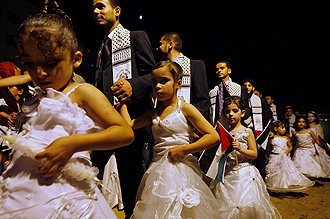 Hundreds of Palestinians were married in a mass wedding ceremony in Beit Lahiya in the northern Gaza Strip on July 30, 2009 (Photo: AP)

In July of last year, Hamas, the Palestinian Islamist group, organized a mass wedding celebration for hundreds of couples in the Gaza Strip. The happy adult grooms, immaculately dressed in black suits and colourful ties, received $500 each from Hamas, no small sum in the besieged territory.

It might have been a joyous event if not for the fact that the brides were “pre-pubescent girls, dressed in white gowns and adorned with garish make-up,” according to the article written by author and journalist Paul L. Williams, and republished by rightwing pundit David Horowitz’s Frontpage Magazine, who regularly appears on mainstream news networks such as Fox and CNN. 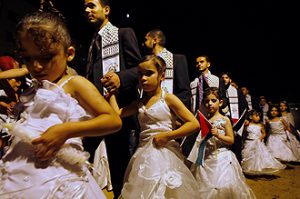 Hundreds of Palestinians were married in a mass wedding ceremony in Beit Lahiya in the northern Gaza Strip on July 30, 2009 (Photo: AP)

The photos show young girls holding hands with the grooms, and the article goes on to explain how pedophilia is inherent to Islam.

It would have been a sordid tale were it not for the fact that the article is a hoax. The married couples were, in fact, consenting adults, but this did not stop the story from being widely disseminated via a vast network of Web-based publications, blogs and mailing lists, and hundreds of readers left online comments.

The Internet is considered by many to be an information Wild West, where anyone can publish stories, often anonymously, and no matter how derogatory their opinions may be. False stories and hateful opinions about Muslims abound on the Internet and have begun to appear prominently in the mainstream discourse, say American Muslims and groups that monitor the media. Many worry that what one sociologist has termed “respectable racism” is having a corrosive effect on American society, and that hate expressed online has real-world implications. Rightwing extremist ideology is now the most dangerous domestic terrorism threat in the United States, according to the U.S. Department of Homeland Security.

“Islamaphobia has moved to the mainstream in the years following the 9/11 attacks,” said Ibrahim Hooper, the National Communications Director for the Council on American-Islamic Relations (CAIR), based in Washington, D.C. “Things that would have been completely outside the pale, like a letter to the editor saying that Islam is intrinsically evil, that would have never been published before 9/11. Now it’s published almost on a daily basis.”

Public figures such as politicians and pundits have used their status in society to confer a certain degree of respectability to racist discourse, according to Canadian sociologist Rachad Antonius. He believes the negative connotations attached to being Arab in mainstream culture have made it acceptable to publically stereotype or disparage Arabs.

There is, in any case, no law against expressing racist opinions or what many would consider to be hate speech.

“There is no particular definition of hate speech since we don’t ban it,” said Floyd Abrams, an attorney and expert on constitutional law. “We ban speech which constitutes an imminent threat of violence. We allow the marketplace of ideas to decide who is worthy of being credited with truthful information and who is not.”

Racist opinions are being voiced loudly and publically. Xenophobia was rife at the tea-party convention in Nashville, Tennessee, Feb. 4 to 6, where some speakers railed against multiculturalism, accusing immigrants of threatening Judeo-Christian values. Talk of “white culture” and chants of “Take it back!” are common at gatherings of tea-party members, now a force to be reckoned with in American politics, and pundits such as Fox’s Glenn Beck or Ann Coulter have helped stoke the flames.

A newspaper can be held liable for defamatory statements made by others within its pages. But the Communication Decency Act passed by Congress in 1996 offers protection to online publishers who put out content created by third parties.

Williams, an American Christian minister and author, has written extensively about Islam and terrorism. In his book “The Dunces of Doomsday,” he claimed that lax security and Egyptian-born professors working at McMaster University’s nuclear reactor in Hamilton, Canada, had led to the theft of more than 180 pounds of nuclear material to be used by terrorists in American cities. The university is suing Williams and has called the allegations false and defamatory.

Rachel Ehrenfeld defended Williams in an opinion piece in the Wall Street Journal on Dec. 21, 2009, referring to the legal action as a “frivolous foreign libel” suit. This despite the fact that Williams’ own publisher has issued a retraction, saying in a statement that the allegations about the university being infiltrated by terrorists and the theft of nuclear material were “without basis in fact.”

Ironically, Williams claims on his website and in numerous other online publications to have penned at least one feature article for the Wall Street Journal but does not say when. Database searches going as far back as 1976 turned up nothing, and Timothy Lemmer of the Journal wrote me “I don’t see a ‘Paul L. Williams’ in our archive, searching by byline back to 1984.”

He also claims to have been published in USA Today. Database searches did not turn up anything, and Michelle Poblete, the assistant reader editor, wrote me in an email “I did a search in our archive, but I did not find any articles written by Paul L. Williams.”

Williams says that he “served as a consultant on organized crime and international terrorism” for the FBI, though this could not be confirmed. Williams maintains that, for over a decade, he “has taught philosophy, religion, and the humanities at The University of Scranton and Wilkes University.” Wilkes University has record of him working there one year, 1998, teaching philosophy, while The University of Scranton has record of him teaching an interdisciplinary class there 25 years ago but could not say for how many years he was a professor.

Williams lifted the first few paragraphs and quotes of his article from an Agence France-Presse (AFP) article he did not write, “Hamas sponsors mass wedding in Gaza,” published a week earlier on July 30, 2009. But he stopped plagiarizing when he reached the following phrase: “The 450 brides shared none of the glamour, taking seats among the audience of around 1,000 party guests: most couples had already taken part in religious ceremonies elsewhere, with more marriages planned for the next few days.”

In his own article, Williams went on to explain how pedophilia is commonplace in Islam, basing his analysis on the traditions of the middle ages and apparently unaware that marrying young, and what would be considered child abuse by modern standards, was a normal occurrence at the time in the ancient world of East and West.

The children holding the hands of the grooms at the celebration in Gaza were not their brides, as he alleged, but their relatives. This was confirmed by other news sources such as Sky News, a sister channel of Fox News. It was also not the first mass wedding to be organized by Hamas in Gaza, where the legal marrying age is 18 or 16 with parental permission if Egyptian Sharia law is followed.

Taghreed El-Khodary, who writes for the New York Times, covered a similar wedding for the paper on Oct. 30, 2008.

“These kids on the stage are the nieces or sisters of the grooms,” she said in an email, referring to the young girls in white dresses. “It is a mass wedding in conservative Gaza; hence brides are sitting with their families. It’s a symbolic party to give credit to Hamas or whatever institution is funding it.”

Williams and Horowitz did not respond to emailed inquiries about the article and requests for interviews.

Muslim groups and media watchdogs say that this is not a simple question of free speech, noting that people with radical views about Christianity, Judaism or Israel are not given prominent platforms on mainstream networks as is Horowitz.

Norman Finkelstein, an American political scientist and author, has written extensively on the Israel-Palestine conflict. He is fiercely critical of Israeli policies toward the Palestinians, and his books have generated controversy as well as received praise from prominent historians and public intellectuals. Yet he has never been invited to appear on a mainstream American network.

“I have never been on American television (not even the cable networks) and the only national radio program I have been on is Democracy Now!” he wrote in an email. “To my mind, the interesting fact is that not even liberal radio programs and moderators would have me on. It is for example unthinkable that I would be on a National Public Radio program. It’s the usual stuff: career and funding.”

Conservative groups are waging a war of ideas online with players such as David Horowitz’ “Frontpage Magazine” and Williams’ “The Last Crusade” supplementing rightwing materials that are widely diffused via blogs, chat rooms, mailing lists and other Web publications. This network has facilitated the free flow of ideas, and created virtual havens in which people vent their collective disillusionment or rage. But the connections made there have shifted from the virtual to the real world.

Elements of white nationalism are fusing with rightwing ideology, as supremacist groups like the Council of Conservative Citizens and the National Socialist Movement have made inroads into mainstream culture by exploiting contentious issues such as the economy and immigration. The tea-party movement may now be, by some accounts, one of the most potent political forces in America. What that will translate to in the future remains to be seen. But many Muslims and other minority groups are fearful.

“It has a very corrosive effect on our society,” said Hooper of CAIR. “Whenever you legitimize, even through your silence, attacks on a religious or ethnic minority, we are all hurt by that. It’s not something that helps our society in any way.”