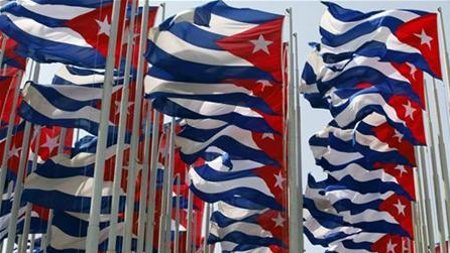 Cuban flags fly beside the Interests Section Office of the United States in Havana a day before the 56th anniversary of the start of the Cuban revolution, July 25, 2009 (Desmond Boylan / Reuters)

Cuban flags fly beside the Interests Section Office of the United States in Havana a day before the 56th anniversary of the start of the Cuban revolution, July 25, 2009 (Desmond Boylan / Reuters)

“Here we go again. I suppose old habits die hard,” said US Ambassador to the United Nations, Susan Rice, on October 28 before the General Assembly voted on the annual resolution to end the US embargo against Cuba. “The hostile language we have just heard from the Foreign Minister of Cuba,” she continued, “seems straight out of the Cold War era and is not conducive to constructive progress.” Her 949-word statement contained not a word about the embargo; not very conducive to a constructive solution to the unstated “Cuba problem”, the one about Cuba inspiring the Third World, the fear that the socialist virus would spread.

Since the early days of the Cuban Revolution assorted anti-communists and capitalist true-believers around the world have been relentless in publicizing the failures, real and alleged, of life in Cuba; each perceived shortcoming is attributed to the perceived shortcomings of socialism — It’s simply a system that can’t work, we are told, given the nature of human beings, particularly in this modern, competitive, globalized, consumer-oriented world.

In response to such criticisms, defenders of Cuban society have regularly pointed out how the numerous draconian sanctions imposed by the United States since 1960 have produced many and varied scarcities and sufferings and are largely responsible for most of the problems pointed out by the critics. The critics, in turn, say that this is just an excuse, one given by Cuban apologists for every failure of their socialist system. However, it would be very difficult for the critics to prove their point. The United States would have to drop all sanctions and then we’d have to wait long enough for Cuban society to make up for lost time and recover what it was deprived of, and demonstrate what its system can do when not under constant assault by the most powerful force on earth.

In 1999, Cuba filed a suit against the United States for $181.1 billion in compensation for economic losses and loss of life during the first 39 years of this aggression. The suit held Washington responsible for the death of 3,478 Cubans and the wounding and disabling of 2,099 others. In the ten years since, these figures have of course all increased. The sanctions, in numerous ways large and small, make acquiring many kinds of products and services from around the world much more difficult and expensive, often impossible; frequently, they are things indispensable to Cuban medicine, transportation or industry; simply transferring money internationally has become a major problem for the Cubans, with banks being heavily punished by the United States for dealing with Havana; or the sanctions mean that Americans and Cubans can’t attend professional conferences in each other’s country.

These examples are but a small sample of the excruciating pain inflicted by Washington upon the body, soul and economy of the Cuban people.

For years American political leaders and media were fond of labeling Cuba an “international pariah”. We don’t hear much of that any more. Perhaps one reason is the annual vote in the General Assembly on the resolution, which reads: “Necessity of ending the economic, commercial and financial embargo imposed by the United States of America against Cuba”. This is how the vote has gone:

How it began, from State Department documents: Within a few months of the Cuban revolution of January 1959, the Eisenhower administration decided “to adjust all our actions in such a way as to accelerate the development of an opposition in Cuba which would bring about a change in the Cuban Government, resulting in a new government favorable to U.S. interests.”[1]

On April 6, 1960, Lester D. Mallory, Deputy Assistant Secretary of State for Inter-American Affairs, wrote in an internal memorandum: “The majority of Cubans support Castro … The only foreseeable means of alienating internal support is through disenchantment and disaffection based on economic dissatisfaction and hardship. … every possible means should be undertaken promptly to weaken the economic life of Cuba.” Mallory proposed “a line of action which … makes the greatest inroads in denying money and supplies to Cuba, to decrease monetary and real wages, to bring about hunger, desperation and overthrow of government.”[2] Later that year, the Eisenhower administration instituted the suffocating embargo.