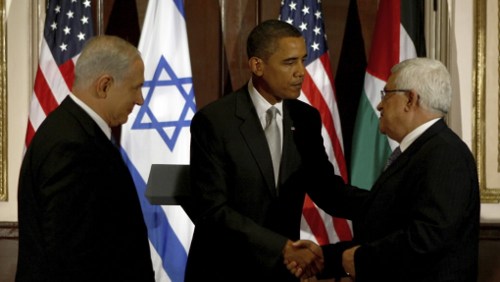 The US government is now so totally under the thumbs of organized interest groups that  “our” government can no longer respond to the concerns of the American people who elect the president and the members of the House and Senate.  Voters will vent their frustrations over their impotence on the president, which implies a future of one-term presidents.  Soon our presidents will be as ineffective as Roman emperors in the final days of that empire.

Obama is already set on the course to a one-term presidency.  He promised change, but has delivered none.  His health care bill is held hostage by the private insurance companies seeking greater profits.  The most likely outcome will be cuts in Medicare and Medicaid in order to help fund wars that enrich the military/security complex and the many companies created by privatizing services that the military once provided for itself at far lower costs.  It would be interesting to know the percentage of the $700+ billion “defense” spending that goes to private companies.  In American “capitalism,” an amazing amount of taxpayers’ earnings go to private firms via the government. Yet, Republicans scream about “socializing” health care.

Republicans and Democrats saw opportunities to create new sources of campaign contributions by privatizing as many military functions as possible.  There are now a large number of private companies that have never made a dollar in the market, feeding instead at the public trough that drains taxpayers of dollars while loading Americans with debt service obligations.

Obama inherited an excellent opportunity to bring US soldiers home from the Bush regime’s illegal wars of aggression.  In its final days, the Bush regime realized that it could “win” in Iraq by putting the Sunni insurgents on the US military payroll.  Once Bush had 80,000 insurgents collecting US military pay, violence, although still high, dropped in half.  All Obama had to do was to declare victory and bring our boys home, thanking Bush for winning the war.  It would have shut up the Republicans.

But this sensible course would have impaired the profits and share prices of those firms that comprise the military/security complex.  So instead of doing what Obama said he would do and what the voters elected him to do, Obama restarted the war in Afghanistan and launched a new one in Pakistan.  Soon Obama was echoing Bush and Cheney’s threats to attack Iran.

In place of health care for Americans, there will be more profits for private insurance companies.

In place of peace there will be more war.

Voters are already recognizing the writing on the wall and are falling away from Obama and the Democrats.  Independents who gave Obama his comfortable victory have now swung against him, recently electing Republican governors in New Jersey and Virginia to succeed Democrats.  This is a protest vote, not a confidence vote in Republicans.

In case you don’t know, the Goldstone Report is the Report of the United Nations Fact Finding Mission on the Gaza Conflict.  The “Gaza Conflict” is the Israeli military attack on the Gaza ghetto, where 1.5 million dispossessed Palestinians, whose lands, villages, and homes were stolen by Israel, are housed.  The attack was on civilians and civilian infrastructure.  It was without any doubt a war crime under the Nuremberg standard that the US established in order to execute Nazis.

Goldstone is not only a very distinguished Jewish jurist who has given his life to bringing people to accountability for their crimes against humanity, but also a Zionist.  However, the Israelis have demonized him as a “self-hating Jew” because he wrote the truth instead of Israeli propaganda.

US Representative Dennis Kucinich, who is now without a doubt a marked man on AIPAC’s political extermination list, asked the House if the members had any realization of the shame that the vote condemning Goldstone would bring on the House and the US government.  The entire rest of the world accepts the Goldstone report.

The House answered with its lopsided vote that the rest of the world doesn’t count as it doesn’t give campaign contributions to members of Congress.

This shameful, servile act of “the world’s greatest democracy” occurred the very week that a court in Italy convicted 23 US CIA officers for kidnapping a person in Italy. The CIA agents are now considered “fugitives from justice” in Italy, and indeed they are.

The kidnapped person was renditioned to the American puppet state of Egypt, where the victim was held for years and repeatedly tortured.  The case against him was so absurd that even an Egyptian judge order his release.

One of the convicted CIA operatives, Sabrina deSousa, an attractive young woman, says that the US broke the law by kidnapping a person and sending him to another country to be tortured in order to manufacture another “terrorist” in order to keep the terrorist hoax going at home.  Without the terrorist hoax, America’s wars for special interest reasons would become transparent even to Fox “News” junkies.

Ms. deSousa says that “everything I did was approved back in Washington,” yet the government, which continually berates us to “support the troops,” did nothing to protect her when she carried out the Bush regime’s illegal orders.

Clearly, this means that the crime that Bush, Cheney, the Pentagon, and the CIA ordered is too heinous and beyond the pale to be justified, even by memos from the despicable John Yoo and the Republican Federalist Society.

Ms. deSousa is clearly worried about herself.  But where is her concern for the innocent person that she sent into an Egyptian hell to be tortured until death or admission of being a terrorist?  The remorse deSousa expresses is only for herself. She did her evil government’s bidding and her evil government that she so faithfully served turned its back on her.  She has no remorse for the evil she committed against an innocent person.

Perhaps deSousa and her 22 colleagues grew up on video games.  It was great fun to plot to kidnap a real person and fly him on a CIA plane to Egypt.  Was it like a fisherman catching a fish or a deer hunter killing a beautiful 8-point buck?  Clearly, they got their jollies at the expense of their renditioned victim.

The finding of the Italian court, and keep in mind that Italy is a bought-and-paid-for US puppet state, indicates that even our bought puppets are finding the US too much to stomach.

Moving from the tip of the iceberg down, we have Ambassador Craig Murray, rector of the University of Dundee and until 2004 the UK Ambassador to Uzbekistan, which he describes as a Stalinist totalitarian state courted and supported by the Americans.

As ambassador, Murray saw the MI5 intelligence reports from the CIA that described the most horrible torture procedures.  “People were raped with broken bottles, children were tortured in front of their parents until they [the parents] signed a confession, people were boiled alive.”

“Intelligence” from these torture sessions was passed on by the CIA to MI5 and to Washington as proof of the vast al Qaeda conspiracy.

“I was absolutely stunned,” says the British ambassador, who thought that he served a moral country that, along with its American ally, had moral integrity.  The great Anglo-American bastion of democracy and human rights,  the homes of the Magna Carta and the Bill of Rights, the great moral democracies that defeated Nazism and stood up to Stalin’s gulags, were prepared to commit any crime in order to maximize profits.

Amb. Murray learned too much and was fired when he vomited it all up.  He saw the documents that proved that the motivation for US and UK military aggression in Afghanistan had to do with the natural gas deposits in Uzbekistan and Turkmenistan.  The Americans wanted a pipeline that bypassed Russia and Iran and went through Afghanistan.  To insure this, an invasion was necessary.  The idiot American public could be told that the invasion was necessary because of 9/11 and to save them from “terrorism,”  and the utter fools would believe the lie.

Guess who the consultant was who arranged with then Texas governor George W. Bush the agreements that would give to Enron the rights to Uzbekistan’s and Turkmenistan’s natural gas deposits and to Unocal to develop the trans-Afghanistan pipeline.  It was Karzai, the US-imposed “president” of Afghanistan, who has no support in the country except for American bayonets.

Amb. Murray was dismissed from the UK Foreign Service for his revelations.  No doubt on orders from Washington to our British puppet.