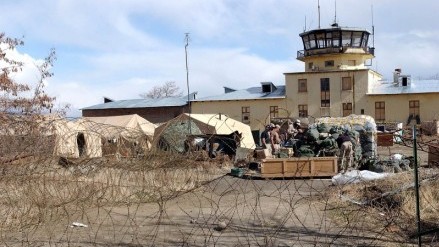 However, while this is a genuinely disturbing development, because it suggests that the Obama administration is essentially following President Bush’s lead by unilaterally rewriting the Conventions, presumably to allow it to continue exploiting prisoners of war for their supposed intelligence value (even though the DoD explained, in its proposal, that “intelligence value, by itself, is not a basis for internment”), only one major media outlet — the New Yorker — has picked up on a disturbing disclosure in the Times’ coverage of the story on Sunday. I reported this in an article yesterday, when I explained that there was something deeply suspicious about the officials’ statement that:

the importance of Bagram as a holding site for terrorism suspects captured outside Afghanistan and Iraq has risen under the Obama administration, which barred the Central Intelligence Agency from using its secret prisons for long-term detention.

As I explained yesterday, this “seems to confirm, in one short sentence, that, although the CIA’s secret prisons have been closed down, as ordered by President Obama, a shadowy ‘rendition’ project is still taking place, with an unknown number of prisoners being transferred to Bagram instead.”

In a blog post for the New Yorker, Amy Davidson also picked up on the statement, calling it a sentence “that doesn’t make much sense,” and then asked:

So closing Guantánamo increases the need for a new Guantánamo, and barring the use of secret prisons just means that you need to find a new place to stash secret prisoners? Have we had it with Guantánamo because it’s unfashionable — like a played-out spring-break destination, now overrun with journalists and human-rights lawyers hopping on planes in Florida — or because we actually don’t like extrajudicial, indefinite detention?

While I await further developments, I recall that, back in April, CIA director Leon Panetta explained that, although the CIA “no longer operates detention facilities or black sites and has proposed a plan to decommission the remaining sites,” the agency “retains the authority to detain individuals on a short-term transitory basis.” Panetta added that, although no detentions had occurred since he became director, “We anticipate that we would quickly turn over any person in our custody to US military authorities or to their country of jurisdiction, depending on the situation.”

Is this what is happening now at Bagram? Shortly after Panetta made his comments, I noted that “the only logical conclusion” I could draw was that, “essentially, the Obama administration’s only real problem with ‘extraordinary rendition’ is one of scale. The Bush administration’s industrial-scale rendition policies have been banished, but the prospect of limited rendition — to third countries rather than to the US court system, as would surely be more acceptable — is being kept as a possible option.”

Whether hidden transfers to third countries are taking place is unknown, but from my reading of the officials’ comments to the Times, I infer that the CIA is now handing suspects over to the US military, including those captured outside Afghanistan, and that this is the reason, above all, that the government is anxious to prevent the US courts from having access to foreign prisoners in Bagram.

Moreover, as with the Bush administration, the indications are that this process focuses solely on the gathering of “actionable intelligence” — or with “decommissioning” suspects — and that those responsible for implementing it have, yet again, chosen to ignore the fact that terrorism is a crime, prosecutable in the US courts, and not an act of war requiring secret prisons and extra-legal detention, however much it may be dressed up in review procedures that include only the following “[p]ossible recommendations” for what will happen to those prisoners who “meet the criteria for internment”: “continued internment” in Bagram, transfer to the Afghan authorities for prosecution, transfer to the Afghan authorities “for participation in a reconciliation program,” and, in the cases of “non Afghan and non-US third-country national[s],” options “that may also include transfer to a third country for criminal prosecution, participation in a reconciliation program, or release.” What, I wonder, are the options that were not included?