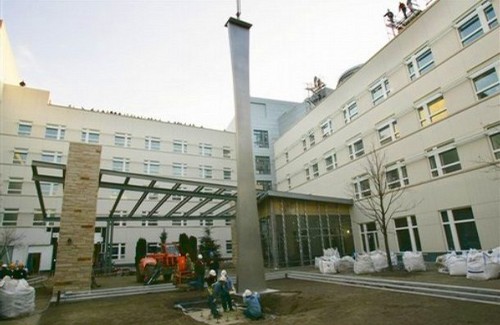 "Totem" by Ellsworth Kelly at the U.S. Embassy in Berlin

FAPE is one of the most brilliant examples in the world demonstrating how the “soft power” is exercised intelligently. Being so far away from the traditional interventionist policies of the U.S. think tanks and the propaganda tactics that most of the mainstream corporate media practice, the Foundation for Art and Preservation in Embassies was established with the objective of promoting and upholding the hallmarks of American culture throughout the world by dispatching freely-commissioned artworks, sculptures, and statuettes to be installed at the embassies of the United States in other countries.

The first bricks of FAPE’s construction were laid in 1986 following the proposition of initiatives by the spouses of former U.S. ambassadors to “places ranging from London to Czechoslovakia” when a large portion of U.S. embassies were still “without art collection” and there was no prominent, robust funding for the restoration and preservation of U.S. overseas historic buildings and “valuable antiques”. 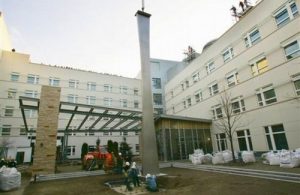 "Totem" by Ellsworth Kelly at the U.S. Embassy in Berlin

So far, FAPE has undertaken a broad spectrum of artistic and art-philanthropic responsibilities from commissioning renowned artists to design and perform creative artworks for installation in the U.S. embassies abroad and restoration programs which are intended to renovate, refurbish and maintain the momentous and historical treasures of the U.S. culture, architecture and “presence” all around the world.

At the same time a number of countries have problems establishing embassies or introduce ambassadors to fortify and safeguard their political presence on neighboring soil, the imaginative people of FAPE intend to impress more foreigners by sending the most inventive, inspiring, and riveting artwork to new U.S. embassies all around the world.

In an interview with Foreign Policy Journal, Jennifer Duncan, the Director of FAPE, sheds more light on the organization.

First, I would like to ask you about the objectives and intentions FAPE’s founders, including the late Leonore Annenberg, would pursue. Why did they first decide to establish such a foundation? Do you believe that FAPE has been successful in fulfilling their aspirations so far?

FAPE was established in 1986. The organization was founded by Leonore Annenberg, Wendy W. Luers, Lee Kimche McGrath and Carol Price. As spouses of former U.S. ambassadors and with Mrs. McGrath as the Director of ART in Embassies at the State Department, FAPE’s founders recognized a need to build upon the Department’s efforts in order to show the best of American art and culture abroad. Art knows no boundaries or political party lines and speaks to our common humanity. As such, our founders believed art was a transcendental language that could be used to initiate conversations with people around the world.

After the Embassy bombings in East Africa in 1998, the State Department’s office of Overseas Buildings Operations established an ambitious agenda to construct more than 50 new U.S. embassies to ensure a safe and secure environment for its personnel.  The Department asked FAPE to join with them on these buildings, and provide major permanent installations.

FAPE’s Art in New Embassies Program is a collaborative effort between FAPE, the embassies’ architects, the State Department, and the artists in order to combine the artist’s work with the design of the buildings and their grounds.  All of the works are gifts of the artists, and FAPE provides the funds to pay for their fabrication and installation.  It is FAPE’s hope that these site-specific works of art espouse a sense of openness and encourage cross-cultural dialogue.

Has FAPE been successful?  Yes. Since its founding, FAPE has raised over $42 million in art and monetary contributions. FAPE’s donations include work by more than 145 preeminent American artists, which are on display in over 70 countries. This includes embassies in Kabul, Buenos Aires, Vienna, Ottawa, Berlin, London, Bangkok, Dar es Salaam, Lisbon, Rome, New Delhi, etc.

So, who are the most prominent artists that have donated artwork to FAPE? How do you persuade them to make such a commitment? Can you assess an aggregate value for your entire collection? 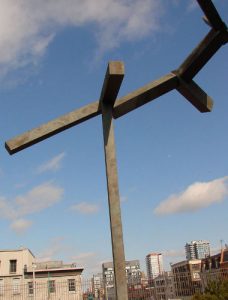 "Conjunction" by Joel Shapiro at the U.S. Embassay in Ottawa

Artists contribute to FAPE because they believe in our mission of using art to facilitate conversations among different cultures. Furthermore, presenting their art in U.S. Embassies abroad gives our artists a chance to work in countries in which they might not have done otherwise. The works are a timeless collection of great American art.

In terms of an aggregate value of our contributions, during its 23 year history, FAPE has raised over $42 million in art and monetary contributions for US embassies around the world. Out of this, the value of art donated has been over $24 million.

Do you actively promote and advertise the hallmarks of American culture in the artwork to be installed in the U.S. embassies abroad? In some of the artwork, for example, the installments in the Beijing and Berlin embassies, such evidence of “Americanism” are not very significant. What do you think?

To FAPE, the artworks themselves are the hallmarks of American culture. FAPE’s gifts are a way of inviting people of the host country to learn more about who we are as a nation. Since the artists are part of an established canon of contemporary American art, their work holds tremendous cultural and monetary value. In essence, FAPE promotes great artists and great art. We think that is a stronger statement about America than simply reproducing iconic American images like the eagle or the flag.