My Message To Obama: Great Speech, But No Military Commissions and No “Preventive Detention” 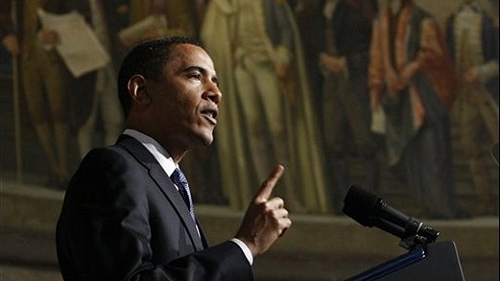 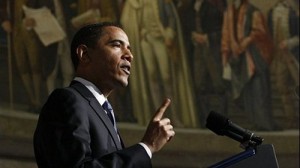 First off, the President has lost none of his oratorical powers. His national security speech today, in which he sought – and, I think, largely found – the correct balance with regard to the horrendous legacy of Guantánamo, was well crafted and delivered. He delicately put down the fearmongers in both parties who have recently tried to make political capital out of Guantánamo, laid down facts about the prison with an admirable clarity, eloquently called for cross-party unity on this most pressing of issues, and also explained his proposed solutions in a comprehensive manner.

I analyze these points in the article below, but although I believe that this speech will help the President score points from those who have, of late, been seeking to undermine him, I also have to point out that, on two issues – the use of Military Commissions and the proposal to introduce a form of “preventive detention” – no amount of eloquence can erode my implacable opposition to both suggestions.

The President began by being openly critical of his predecessors, who, “faced with an uncertain threat … made a series of hasty decisions. Even though those decisions were “motivated by a sincere desire to protect the American people,” he made it clear that many of them were “based upon fear rather than foresight,” and, interestingly, noted that the Bush administration “all too often trimmed facts and evidence to fit ideological predispositions” – a statement which appears to refer to the inadequacy of the evidence against numerous Guantánamo prisoners, which I have been writing about for over three years, and have highlighted in two recent articles.

Obama proceeded to point out that the Bush administration had also set aside America’s core principles “as luxuries that we could no longer afford,” but also extended the responsibility for allowing this to happen to “politicians, journalists and citizens,” who all “fell silent” in this “season of fear.”

“In other words,” he continued, “we went off course,” and he suggested that the American people had realized this when they “nominated candidates for President from both major parties who, despite our many differences, called for a new approach – one that rejected torture, and recognized the imperative of closing the prison at Guantánamo Bay.”

Moving on to specifics, Obama defended the absolute prohibition on the use of torture – although he didn’t, of course, mention some reservations about loopholes in this policy that I explored here – and unreservedly refuted claims that waterboarding was either necessary or useful (a familiar refrain, but one particularly focused just now on Dick Cheney, who appears to be on an endless Torture Tour). “I know some have argued that brutal methods like waterboarding were necessary to keep us safe,” he said, but added, “I could not disagree more. As Commander-in-Chief, I see the intelligence, I bear responsibility for keeping this country safe, and I reject the assertion that these are the most effective means of interrogation.”

On Guantánamo, Obama and his team had certainly done some research. The President made a point of mentioning twice that the Bush administration’s trials by Military Commission had led to only three convictions in seven years, and that 525 prisoners were released from the prison under his predecessor’s watch, and proceeded to emphasize that he was “cleaning up something that is – quite simply – a mess; a misguided experiment that has left in its wake a flood of legal challenges that my Administration is forced to deal with on a constant basis, and that consumes the time of government officials whose time should be spent on better protecting our country.”

Stressing that “the problem of what to do with Guantánamo detainees was not caused by my decision to close the facility; the problem exists because of the decision to open Guantánamo in the first place,” Obama pointed out that “the legal challenges that have sparked so much debate in recent weeks” – the court order to release 17 Uighurs into the United States, and the Supreme Court’s 2006 ruling on the invalidity of the Military Commissions – had taken place under the Bush administration, and, in the case of the Supreme Court, in a Court that “was overwhelmingly appointed by Republican Presidents.” This was true, but the emphasis he placed on it conveniently allowed him to evade responsibility for not intervening to prevent an appeal court from shamefully reversing the ruling about the Uighurs just three months ago.

Having established this background, Obama then openly criticized “some of the fear-mongering that emerges whenever we discuss this issue,” adding, “Listening to the recent debate, I’ve heard words that are calculated to scare people rather than educate them; words that have more to do with politics than protecting our country.” Explaining, “I want to solve these problems, and I want to solve them together as Americans,” he insisted that “the wrong answer is to pretend that this problem will go away if we maintain an unsustainable status quo,” adding, “Our security interests won’t permit it. Our courts won’t allow it. And neither should our conscience.”

Moving on to the specific issues relating to the closure of Guantánamo, Obama began by assuring would-be critics that “we are not going to release anyone if it would endanger our national security, nor will we release detainees within the United States who endanger the American people” (a statement intended, I think, to provide reassurance that the Uighurs are not a threat). He then got down to details, beginning with a pledge that, “[w]here demanded by justice and national security,” “some detainees” – mercifully, not all 240 – will be transferred to secure prisons on the US mainland (with some added reassurance that “nobody has ever escaped from one of our federal ‘supermax’ prisons”).

After dismissing some of the shrill rhetoric about the recidivism rates of released prisoners by blaming it on the Bush administration’s “poorly planned, haphazard approach” to releasing prisoners (and not, of course, mentioning that another shoddy and exaggerated report was leaked by his own Defense Department just yesterday), Obama promised that, “when feasible, we will try those who have violated American criminal laws in federal courts,” mentioning, thankfully, how federal courts have been perfectly capable of prosecuting terrorists (as, for example, in the cases of Ramzi Yousef and Zacarias Moussaoui), and also mentioning today’s reassuring announcement that one of Guantánamo’s “high-value detainees,” Ahmed Khalfan Ghailani, an alleged associate of the African embassy bombers, will be tried in a federal court in New York.

More worryingly, Obama also confirmed that, in some cases, he would indeed be pressing for trials using a revised version of the Military Commissions that were first conceived as an appropriate venue for “terror suspects” by Dick Cheney and David Addington, arguing – wrongly, I believe – that they have a noble history, are “an appropriate venue for trying detainees for violations of the laws of war,” and will, with some tweaking, be “fair, legitimate, and effective.”

We can at least be reassured that, unlike Cheney and Addington, Obama promised to “work with Congress and legal authorities across the political spectrum on legislation” relating to the Commissions, but I have to say that I will continue to campaign against the revival of the Commissions in any form, and that I also regard today’s decision to charge Ahmed Khalfan Ghailani in a federal court as a clear indication that trials in the US court system are the only legitimate way forward, and that setting up a two-tier system – of federal courts on the one hand, and Military Commissions on the other – appears to be nothing but a recipe for disaster.