Obama, American Ideals, and Torture as ‘a useful tool’ 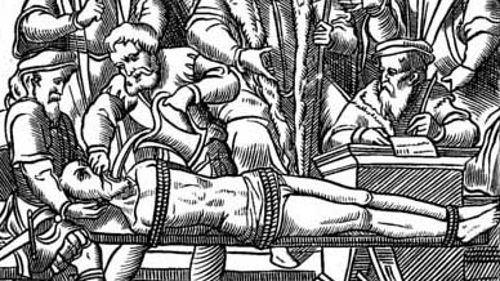 This is perfectly well recognized. In fact, many of the interrogation methods authorized during the Bush administration were derived from Chinese Communist techniques. Military interrogation trainers at Guantanamo Bay, Cuba, where the U.S. maintains a detention facility, based an entire class on methods taken from a 1957 study entitled “Communist Attempts to Elicit False Confessions From the Air Force Prisoners of War”.

The military developed a training program ostensibly designed to teach members of the armed forces how to resist harsh interrogation methods, but this program, known as “Survival, Evasion, Resistance, Escape”, or SERE, was used by both the C.I.A. and military not to teach resistance to such methods, but rather how to use such methods on others.

Remarking on the revelation of the origins of interrogation methods employed by the U.S. after 9/11, Senator Carl Levin said, “What makes this document doubly stunning is that these were techniques to get false confessions. People say we need intelligence, and we do. But we don’t need false intelligence.”

Continuing, Friedman points out that “The president takes an oath to preserve, protect and defend the Constitution from all enemies foreign and domestic”, but argues fulfillment of this oath required President Bush to authorize torture gain intelligence. In other words, he adopts the position of the authors of government legal memos that it’s okay to disregard U.S. and international law under the U.S. Constitution in cases where the President unilaterally decides it is necessary to do so for national security.

Friedman illustrates this supposed necessity not with a real life example, but with what is known as the “ticking time bomb scenario”.

Lt. Col. John A. Nagl, coauthor of the Army counterinsurgency field manual, said, “Frankly, I joined the military to fight against people who torture” in expressing shock and horror at a survey by Foreign Policy that found that 44% of retired and active military officers disagreed with the statement “Torture is never acceptable”. He suggested this figure might reflect what he called “the Jack Bauer effect” (a reference to the popular TV series “24” in which the main character employs torture in just such “ticking time bomb” scenarios) and “the extraordinarily hypothetical, one in a million million sort of case”.

Torture should be exercised only by “well-trained, experienced personnel”, Friedman argues in his STRATFOR assessment. While acknowledging that “the person you are torturing may well know nothing at all”, in which case torture “becomes not only a waste of time and a violation of decency, it actually undermines good intelligence.” But at the same time he argues that “critics” of torture “cannot know the extent to which the use of torture actually prevented follow-on attacks.” While such critics “may have been correct”, nobody “had the right to assume” that another terrorist attack wasn’t imminent.

The implication is that critics have no right to judge those responsible for authorizing and using torture. The problem isn’t with the use of torture itself. Torture, “as with other exceptional measures”, he argues, “is useful, at best, in extraordinary situations.” But “in the hands of bureaucracies”, it “becomes the routine”. Torture was initially “essential”, but after time “the emergency” ended. It “can be a useful tool”. Torture isn’t wrong, in other words, it is just at times not necessary.

The “fundamental question” to Friedman and his ilk is what the limits are on the president’s obligation under his oath of office, implying that the Executive may have a duty to use torture under the U.S. Constitution – the very argument employed by the authors of the legal memos in question.

That such Orwellian logic, which says essentially that the president must assume dictatorial powers and violate U.S. and international law in order to uphold his oath of office, has come to be so widely accepted in mainstream thought and commentary is perhaps an instructive measure about the “unshakeable commitment to our ideals” in American society today.