Ahmadinejad Holds Up a Mirror to Western Powers, Inviting Scorn 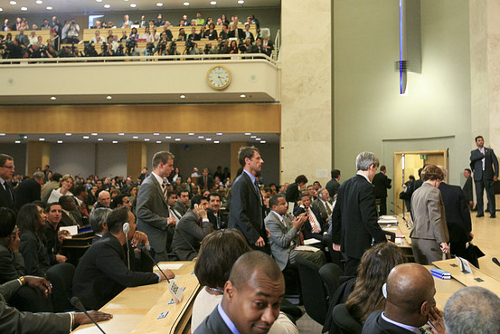 Delegates walk out in protest to the speech of Iranian President Mahmoud Ahmadinejad at the U.N. Durban Review Conference (Reuters)

Delegates walk out in protest to the speech of Iranian President Mahmoud Ahmadinejad at the U.N. Durban Review Conference (Reuters)

Western leaders have reacted with anger and scorn to remarks by Iranian President Mahmoud Ahmadinejad at the United Nations conference on racism on Monday, which were interrupted by protestors dressed as clowns and by delegates storming out in protest of his harsh criticism of Israel.

The U.N. Durban Review Conference is being held in Geneva, Switzerland, to review the implementation of the Durban Declaration of Programme of Action from the World Conference Against Racism held in Durban, South Africa, in 2001. That conference was boycotted by the United States and other Western nations to protest the summit being used as a platform to criticize Israel. A draft text of the Declaration equated Zionism with racism, although this language was removed from the final text voted on at the conference by attending delegates.

The U.N. has been at the center of controversy about Zionism being equated with racism before. In 1975, the U.N. General Assembly voted to pass Resolution 3379 determining that “Zionism is a form of racism and racial discrimination”, which was revoked in 1991 by Resolution 46/86 under pressure from Israel’s main benefactor, the U.S.

Then U.S. President George H. W. Bush addressed the Assembly, saying that the “Zionism is racism” resolution mocked the pledge of U.N. members to practice tolerance and live as peaceful neighbors, but making no mention of the plight of the people living under Israel’s discriminatory, violent, and oppressive policies in the illegally occupied Palestinian territories.

In fact, Israel’s discriminatory and criminal policies have repeatedly been condemned by the United Nations in Security Council resolutions, which reflect standards of internationa law that Israel has perpetually been in violation of.

The Obama administration had announced that it would similarly boycott “Durban II”, as the Review Conference has been called, on the grounds that the Conference would be used as a platform for criticizing Israel, a key historical U.S. ally in the Middle East. The State Department also protested the inclusion in the Durban Declaration and Programme of Action of language urging countries to act against “incitement to racial hatred”, saying that it runs “counter to the US commitment to unfettered free speech.”

President Ahmadinejad was the only head of state who accepted a United Nations invitation to participate in the Conference. A number of other nations, including Canada, Australia, Germany, the Netherlands, Poland, and Italy, joined the U.S. in boycotting the Conference. France announced that it would attend, but would walk out if Israel fell under criticism in the Iranian President’s scheduled speech.

Ahmadinejad opened his speech with a prayer for peace and justice, but was immediately interrupted by French Jewish students dressed in clown wigs and noses, who called the Iranian head of state a racist. The protestors were removed, but his speech was interrupted again when delegates stormed out in protest when he criticized world powers for establishing “a racist government in the occupied Palestine”.

Contrary to popular myth that the U.N. created Israel, the state was founded in May 1948 when Zionist leaders unilaterally announced its existence. The Zionist program, which involved the displacement of many native Arab inhabitants of Palestine as European Jews immigrated to the region, received the blessing of Britain, the U.S., and other Western powers which adopted a policy of explicit rejection of the right of the Arab majority of Palestine to self-determination.

Israel’s founding was also accompanied by the ethnic cleansing of its Arab inhabitants, resulting in the large Palestinian refugee population that still exists today. In 1967, Israel took over the West Bank and Gaza Strip, creating more refugees and beginning an illegal occupation marked by discrimination and violence that continues to this day with support from the U.S. and other Western powers.

Despite Israel’s history of racist policies towards Arab Palestinians, many Western leaders reacted with scorn to Ahmadinejad’s criticism of Israel and nations which support its criminal policies.

The U.S. Deputy Ambassador to the U.N. Alejandro Wolff characterized it as a “vile and hateful speech.” He added that “It shows disregard for the organization to which he is speaking, the United Nations”.

In his speech, Ahmadinejad also criticized the discriminatory nature of the United Nations itself and called for reform in international institutions to a more democratic standard, including the rejection of the veto power wielded by the members of the Security Council, whose permanent members are the U.S., Britain, France, Russia, and China.

U.N. General Secretary Ban Ki-Moon responded by issuing a statement deploring the speech, accusing the Iranian President of using the platform “to accuse, divide and even incite.”

Israel’s Prime Minister Benjamin Netanyahu reacted hysterically to the speech, saying “We will not allow the Holocaust deniers to carry out another Holocaust against the Jewish people.”

It is virtually obligatory in Western media propaganda to include in articles on the Iranian president that he has denied that the Holocaust occurred and seeks the destruction of Israel. The former claim comes from remarks Ahmadinejad made in which he observed that the Arab Palestinians should not be made to pay the price for the crimes of Nazi Germany. The latter claim stems mostly from a statement in which the Iranian head of state spoke about the necessity to replace oppressive regimes. He cited the Shah’s Iran, Saddam Hussein’s Iraq, and Israel as examples.

Israeli leaders have repeatedly called for a military attack against Iran in order to punish it for continuing to enrich uranium for its nuclear program. Consecutive U.S. administrations, along with Israel and other U.S. allies, have accused Iran of seeking nuclear weapons, despite the fact that the U.S.’s own intelligence community has assessed that Iran today has no nuclear weapons program and reports from the International Atomic Energy Agency (IAEA), the U.N. nuclear watchdog agency, that repeatedly reaffirm that there is no evidence such a program exists. Credible analysts have also observed that it would probably be necessary for Iran to kick out IAEA inspectors who are in the country monitoring and verifying the peaceful nature of its nuclear program before it could expand the program for military purposes.

Ahmadinejad’s remarks were not so poorly received by everyone. He was applauded on occasion during his speech, and Pakistan’s Ambassador to the United Nations Zamir Akram commented on the controversy over Ahmadinejad’s speech by saying “If we actually believe in freedom of expression, then he has the right to say what he wants to say.”

During the speech, the Iranian leader also condemned Israel’s three-week military assault on Gaza that began in December and resulted in hundreds of civilian deaths.

He also criticized the U.S. invasions of Iraq and Afghanistan, saying that such actions were intended only to “expand their sphere of influence” and “plunder energy resources” and were clear examples of “egocentrism, racism, discrimination” and “infringement upon the dignity and independence of nations”.

In addition, he blamed the U.S. and Western powers for the global financial crisis, asserting that their financial policies exist “in defiance to all moral values only to protect the interests of the owners of wealth and power”, evidenced by the injection of “hundreds of billions of cash from the pockets of their own people into the failing banks, companies, and financial institutions”. The power elite “are simply thinking about maintaining power and wealth”, Ahmadinejad charged. “They couldn’t care any less about the people of the world and even about their own people.”